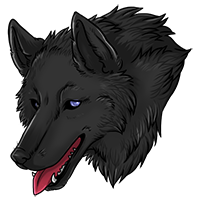 Discordant is a large, charcoal-black Mackenzie Valley wolf with a serious attitude problem. He enjoys seeing other people in pain just to laugh at them, and treats everything like a joke, because to him, everything is meant to amuse him. Discordant is a nihilist who believes that the only point to life is to get amusement out of everything, but his idea of amusing is slightly twisted. He is a lazy guy, so he won't go as far as murder in his pursuit of enjoyment, but expect disrespect and meddling in your affairs when you meet the guy. He likes to bully people and get under their skin, just to watch them squirm. 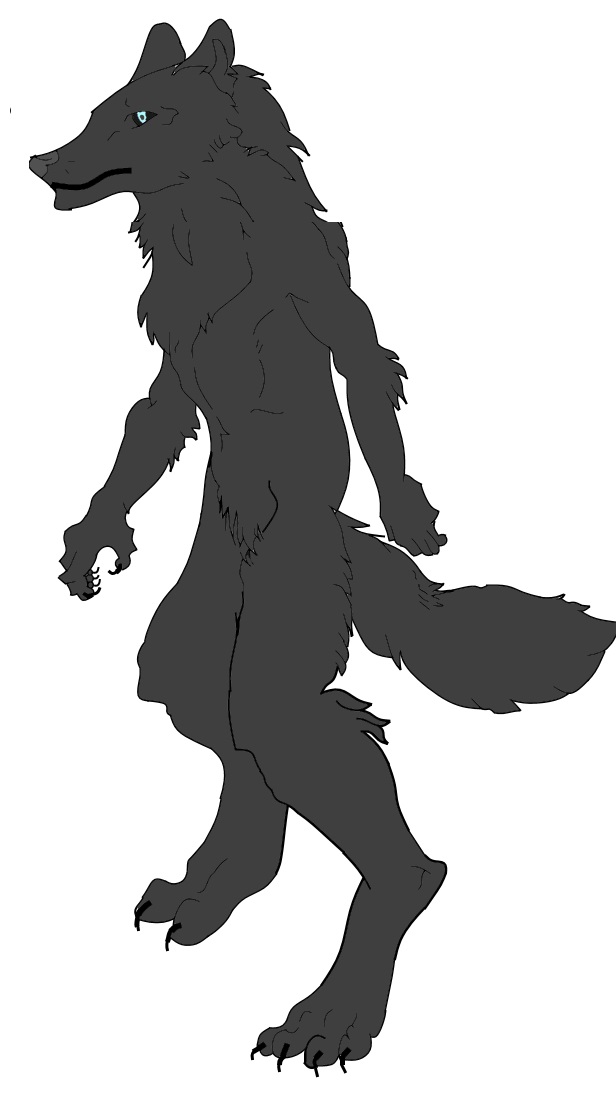 Discordant is a mischievous sort of fellow. He enjoys causing trouble for others, and he doesn't care how it will affect them. This can lead him into trouble sometimes, but he's a big, strong, and clever Lupreci, so he has always managed to get out of whatever trouble he lands himself into. He has never had many friends because of his troublesome nature, but he doesn't mind.

He has a kind of nihilistic view on the world, believing that there is no point to morality, or really life as a whole. His only goal in life is to have as much fun as possible. He achieves his idea of fun by causing pain, be it physical, mental, or emotional, to others. He has yet to run into someone who has been able to knock down his enormous ego, as he is a powerful and cunning Lupreci. His powerfully-built body and the sly mind behind the muscle makes him a dangerous enemy; however, his disdain for others could be his downfall, were he to underestimate an opponent due to his ego.

Even familial relationships aren't safe from Discordant's disdainful attitude. He looks down on his two brothers: Arpeggio and Clef, for being weaker than him -they both settled down with mates soon after coming of age. The only one he has respect for is his father, who taught him how to use his power to make himself strong.

A den within the Howling Caverns. It is a simple place, with a bed made of moss and very few belongings, as Discordant prefers the life of a Lupus to Optime.

Discordant was born in a litter of three, with two brothers. His parents were both Lupreci, and the gene was passed down from them to him and his siblings. His father was the leader of a pack, and he doted on Discordant from the moment he was born, as Discordant was the largest of his siblings, and, to his father, showed the most promise for becoming the next leader of the pack. Discordant was spoiled rotten by his father; he got whatever he wanted, when he wanted it. This, along with his larger stature, made him into an easy bully to his brothers, Arpeggio and Clef. Clef was the runt of the litter, running smaller than normal for a Mackenzie Valley wolf, and he was shy, making him an easy target for Discordant's bullying.

Arpeggio was normal-sized, but he tried to stop Discordant from picking on Clef, and so Discordant began picking on him, too. Discordant's larger size made it easy for him to do whatever he wanted to the smaller wolves. His mother disliked Discordant's attitude, but despite attempts to correct his behavior, his father would always sweep in and undermine his mother's authority, saying that Discordant was just being a pup and the other pups should not be weak.

Discordant's father taught Discordant everything he needed to know but left his other siblings to be taught by other wolves. His father taught him to be cold and ruthless, and cunning above all else.

Then, tragedy struck. During a storm, Discordant's father was pinned under a fallen tree, and by the time anyone realized he was missing, it was already too late to save him. Discordant went from a bright future to a dark path. A new wolf became the leader, and his son would be the next leader. Discordant turned into a nihilist. He decided that life held no meaning, because, in the end, all they were was one freak accident away from being dead.

He turned his anger and grief onto other wolves, playing mind games and pitting them against each other, just to amuse himself. It wasn't long before the new leader caught on to what was happening, and turned Discordant away from the pack, telling him to go make something of himself.

Discordant reacted in anger, but there was nothing he could do. Furious, he turned away from pack life, and lead the life of a loner, picking on innocents and the naive.

Upon coming to 'Souls, he joined up with Anathema, as a pack welcoming of outcasts.