Nyx is a scarred, lean, petite, and muscular Wolfdog with snowy white fur, purple eyes, and caramel markings. She is quite tiny when assuming her Lupus form, being the size of an adolescent Wolf due to some smaller dog bloodlines. When in her Optime form, she is lean and strong, but overall small, coming in at a solid 5' but with visible muscle tone and some softness over her hips due to motherhood. She appears small and perhaps weak due to her size, but over time has developed strong muscles from daily training.

As a result of an early attack on her family, Nyx was left with multiple scars that span from her face, abdomen, arms, and legs. Over the course of her career as a warrior, she has incurred many more as well, overcoming partial lameness in her youth and time and again overcoming pregnancy, depression, injury, and circumstance to become the strong warrior she is today.

If they're a hybrid, you can talk about what species your character most resembles, and how the different species play into their appearance -- e.g., doggish build, wolfish undercoat, coyote muzzle, etc. 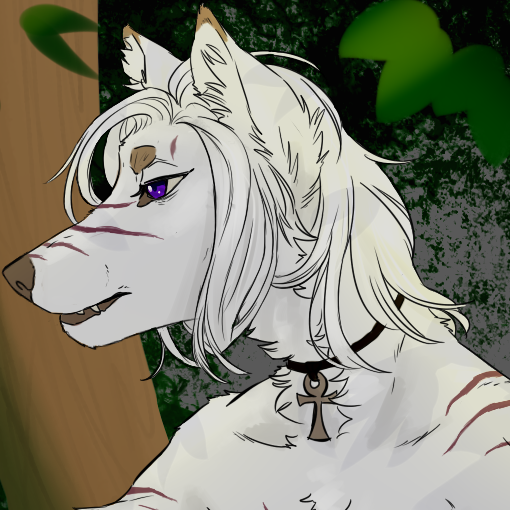 Nyx was born in Alaska in a litter of five, however at only a few days old, a forest fire decimated her home, and her parents were forced to move, quickly. They managed to establish a new territory for themselves over the border into Canada, however, at a young age, Nyx's life was overturned once again. A hostile pack of Luperci invaded her home, turning her peaceful world upside down. One of them attacked her, and after having sustained many injuries, she managed to escape as her mother attacked the invading Luperci. Nyx hid and watched as her family was destroyed before her eyes. Her parents fell, never to get up again, and her poor siblings were torn to pieces in front of her.

Afterwards, Nyx managed to drag herself away to a stream and drink, regaining some strength and trying to lick the blood from her fur. That night Nyx returned to the scene to mourn the loss of her beloved family. As she laid down for the night, a rustling amid the leaves reminded her that she was not alone, and forced her to run away. Nyx barely managed to fend for herself from that point onward. She mostly avoided others and was able to hunt small prey like her parents taught her. She was something of a natural in that department. The she-wolf developed anxiety and depression over the next couple weeks, and the condition of her wounds never truly improved. The deep scratches on her right foreleg were never able to fully heal, leaving it painful for her to use.

Nyx had lived alone for a short time, but eventually came upon Nova Scotia, and within it, Anathema. Since then, Nyx has lived in Anathema where she has acquired an adoptive family and has made new friends that are very dear to her heart. Nyx worked her way through the Warrior tiers in Anathema, determined to make a comeback. Currently, she holds the highest position in the Warrior tier rank system, Purson.