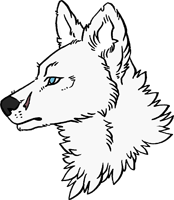 Forest Fellwinter is a wolf living as a Loner with his mate, Gemini Korbea, in Ethereal Eclipse. They're currently guests at the camp of Oglethorpe. They previously resided in the Eastern Realms, but abandoned the area following the collapse of the Death Mountains.

Species: Mostly a wolf mix with some dog in there
Age: 7
Sex: Male

Mostly white, fur darkens to grey along his limbs and has some light speckling. Blue eyes. Broad-shouldered and somewhat intimidating. No real "mane" or "hair" in Optime form. Forest does not seem to prefer any particular form and it's equally likely to find him in any shape. However, as he's been helping with wood processing and construction, Optime and Secui form are currently more common than Lupus.

Reserved, thoughtful, well-spoken, but a little gruff. Prefers to let Gemini speak, but will back her up if necessary. Very patient and good at defusing situations, but once he's angry, he's really angry.

He really isn't a fan of horses and will sometimes get into grumpy staring matches with them if there's nothing else to occupy him.

Does not mind strangers, but doesn't seek them out either. Will make small talk if approached. Doesn't like talking too much about himself, but happy to exchange general information. Has no real interest in trading, trinkets, or many aspects of humanised living. Forest doesn't have much of an accent, but tends towards short, complete sentences.

Excels at feral combat in both Lupus and Secui form, taking advantage of his natural size and thick fur to overpower smaller opponents. Doesn't start fights, but if it gets to that point, will immediately go for the kill.

Skilled at old-fashioned hunting. Very good at cooperating with a small team for larger or more dangerous prey like caribou, but can take down most deer on his own.

Has a good memory for directions, landmarks, and terrain, as well as weather patterns. Good at predicting the frequency and severity of storms. Can typically find his way back anywhere he's been to once.

Gemini and Forest were near the Yahraw when the mountain began to collapse. They'd already been discussing leaving the area and moving to the other side of the Halcyon, so they split from the rest of the group pretty readily once everything went down. They have few connections outside of the area though, so there's little motivation to travel too far.