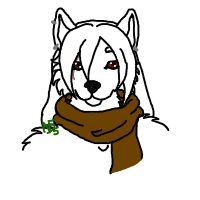 Kamilia came to Midnight Shores after hearing of it from a fellow Loner.

Kamilia comes from a pack of fighters, and was meant to be the next leader. (They chose through bloodlines). She was on patrol one day, when she got ambushed by a pack of wild dogs, hitting her head in the scuffle, causing her to lose her memory.

Kamilia wandered too far from her pack while in a daze, and by the time she regained awareness, she was lost and alone. Then because she couldn't remember why she was alone, traveled to Canada to find a new pack. While traveling she regains a few tidbits of her past, but not enough to remember where the pack was. Along the way she has picked up a stray black cat with green eyes, which she has named Rook the Cat, who follows her about everywhere.

-After mating with Hammish she panics thinking it is too fast and runs away. While running away she falls and hits her head bringing back those lost memories, but unfortunately makes her forget about her life in MS. So she is currently wandering Canada, wondering what to do since she doesn't want to go back to Alaska.-

After traveling Souls, for a time she reunited with Hammish who helped her remember what had happened during her time in Midnight Shores. Together they decided to go back to Alaska and they started a farm where they raised their children.

Kamilia has acted meek and shy up to this point. Unsure on how to act around others like her since she can't remember everything about her old pack.

Her usual personality is a no-nonsense, almost overly stern attitude.

Kamilia tends to like being silent, not talking unless spoken to or if she deems that she has information that is needed. When she does talk it is usually in a straight forward(or blunt) manner.

When she is angry she can yell at someone with no mercy. She can be loyal, and protective to the point that she is willing to die for others(depending on how much she likes the other party).

Her mother and father were the leaders of a small fighter pack in Alaska.

Kamilia is 70 centimeters tall in full wolf form, her fur is White. She has three earrings, two in her left ear(upper and at base of the skull) and one in her right ear(base of skull). Her eyes are a red color, and she has a scar over her left eye, though it seems she can see from it fine.

While in Optime form she comes to 5 feet. This is the form she is more comfortable in, though she does go into her feral form to travel faster or to hunt.