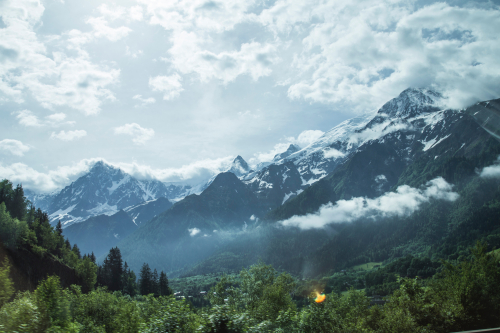 Eldergard is a vale deep within the Frostreach mountains in the wilderness known to the locals as the Hinterlands. The valley was carved by glaciation many ages ago. The Frostreach provides insulation and isolation for Eldergard as the mountains surround it from all sides. At the foothills are swathes of evergreen pines and ancient rivers that climbs down from the peaks above. Towards the center of the vale the trees become deciduous and the land opens up to lush woodland, the canopy so thick during the height of summer that no light can penetrate their boughs. Some areas of Eldergard are less abundant of flora; places where the glacier clawed the earth are left with rolling moors and hills dotted with boulders and stone cut by the ice and abandoned. From the foothills the rivers branch out in numerous sizes. Thick strands cut through the woodlands while the moors sport trickling streams that gather at the lowest points of elevation. The Frostreach mountains themselves are an ever present shadow over Eldergard. They adorn their peaks with white caps nearly all year long and clouds often halo them, no doubt continuing the steady stream of snow that cloaks them. It can make travelling them dangerous for the unprepared but familiar to the inhabitants.

Due to its geographical relevance in the Pacific Northwest and elevation, it boasts an Alpine climate. While Eldergard experiences all four seasons, their general temperature does not exceed past 16°C (60°F). Averages in the summer reach 13°C (55°F) while averages in the winter reach -10°C (13°F). Eldergard experiences heavy precipitation in the form of light showers during the summer and heavy snowfall during the winter. The climate in the Frostreach mountains are more extreme, boasting colder temperatures and more precipitation.

Flora endemic to mountainous regions can be found here, many of which have found use with the healers of the land. The fertile valley, while not suitable for traditional agriculture, can allow farmers to grow a variety of fruits that are able to grow at high altitudes such as cherries, pears, and plums. Orchards are a beautiful sight in the spring and are often celebrated. Fauna of a similar Alpine nature as the plants make their home in Eldergard. They provide a prominent role in Eldergard's way of life; not only are they the inhabitant's sustenance, but they are also incorporated into the houses' heraldry. The most prominent fauna include mule deer, moose, Rocky Mountain elk, rodents, a variety of songbirds, fish crows, common ravens, raptors, snowshoe hares, grizzly bears, and a variety of fish.

Untouched by man during their reign, the region is known for its natural vitality and beauty alongside its deep, rich history. It had been thoroughly claimed by Luperci shortly after the introduction of the virus. Over time, they have adopted civilization, culture, and society.