Throughout the United States and the southern regions of Canada.2 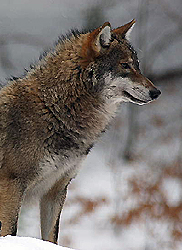 Great Plains Wolves tend to be between 4.5 - 6.5 feet (137 - 198 cm) long from the tip of their nose to the tip of their tail. Their weight can vary greatly, from 60 - 110 lbs (27 - 50 kg). They are considered the averaged-sized representative for a North American Wolf, as opposed to the Common Gray Wolf, nominative subspecies and European representative of size. "They tend to have a long and bushy tail, generally with a black tip. Their coat coloration is generally a “grizzled gray, but show[s] great variation ... ranging from white to black."3 Some Great Plains Wolves have reddish or tawny hints to their fur. Typical coat ranges are gray, black or buff with reddish hues.

These wolves tend to keep smaller packs of five or six individuals, though larger packs have been observed. They maintain a strict social order and hierarchy as any other subspecies. The typical diet of the Great Plains Wolf consists of white-tailed deer, moose, beaver, snowshoe hare, and smaller birds and mammals. As it may be inferred from one of its common names, prior to the near-extinction of the American Buffalo, the Buffalo Wolf relied primarily on those animals for sustenance. 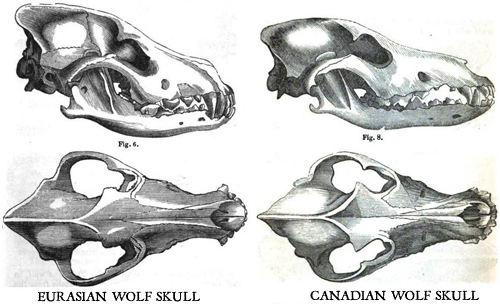 Comparison of a Eurasian Wolf skull with a Canadian wolf skull.4, 5

Though these wolves were considered endangered in the United States, Canada still supported a very large population of wolves, and so this wolf was not in true danger, though its home range had been severely restricted. Following 1988, they steadily moved southward, reclaiming most of their original range throughout the United States.

These canines regularly interact with others, and as they have a vast range, they are mostly Luperci. As coyotes and wolves shifted their territories and expanded, the Luperci virus certainly permeated this subspecies' home range. Like most North American canines, they prefer a feral lifestyle, though isolated patches of humanized populations can be found.