Skeleton Key is a coyote and member of Del Cenere Gang. He tries so hard, but in the end, it doesn't even matter. He tends to come across as a bit of a desperate guy who's trying too hard to be tough, but in actuality, mostly just gets bullied by his sister.

He is the son of Lucilla Key and another coyote. He journeyed to 'Souls with his mother and siblings in summer 2016. After his mother and River joined Inferni, Skeleton and his sister, Carnivore, decided to strike out on their own.

In Apri 2019, he joined the loner band The Cartel and was one of the founding members of Del Cenere Gang in June later that year.

As a member of Del Cenere Gang, he participated in retaliation against the del Mar family during a period of escalating hostilities, siding with Boone Lykoi, who advocated for a heavy hand to punish the tyrants during the Born Unto Trouble plot. 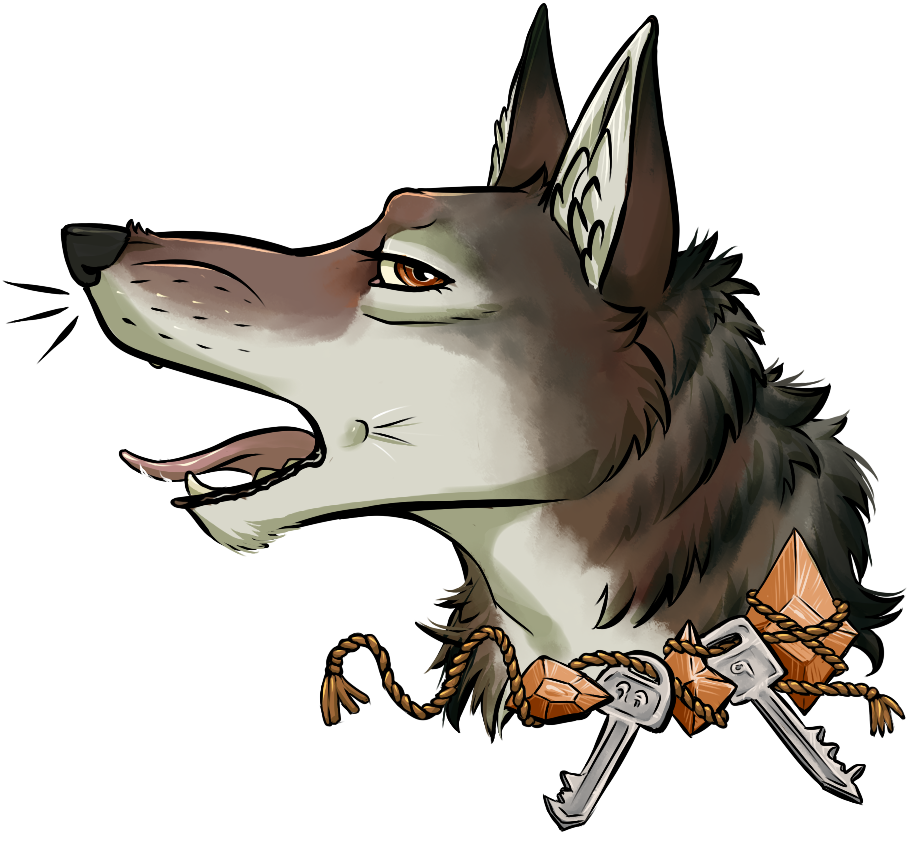 Skeleton wants to be cool, charismatic, and flirtatious, but he's just not. It's fairly easy to see through his desperate and often clumsy attempts at being cool, tough, or intimidating. It's as if he wants to be hardcore, but he's afraid or doesn't know how. The harder he tries, the more obvious it is that he's not as cool as he thinks he is and especially isn't as slick as he pretends to be. He's really just a puffed up rice cake.

Skeleton finds it challenging to fit in. He was a loner for so long with his sister, Carnivore, that he's only just beginning to adjust to pack life in Del Cenere Gang. As well, he has a bit of a sense of disassociation with his family because he's tried to reach out to them so many times, but hasn't formed any friendships or even acquaintanceships with his family beyond Carnivore. To a certain degree, he doesn't think he deserves much better, but he's a glutton for punishment, so he keeps trying to find his family and the vestiges of Inferni, expecting and almost hoping that he will get left behind.

He wants to be his own individual, but he craves validation and comfort, so the result is extreme indecision.

He grew up understanding that his grandfather was aggressively homosexual and, in his youth, thought that since he was a boy, he would be gay too. Once he got older, he began to better understand how sexuality works -- and realized that just because his grandfather was gay, it doesn't mean he has to be to -- but consequently, still grapples with the question of who he is. For anyone experienced, it's pretty obvious he's compensating, anxious, and embarrassed all at once, so his macho act might not fool anyone. On the other hand, another embarrassed virgin might take his bravado at face value.

Skeleton was born to Lucilla Key during her time away from Inferni alongside a number of littermates. When his mother decided to return to Nova Scotia, Skeleton accompanied her for the journey, but they parted ways once they reached the general areas, with Skeleton and Carnivore deciding to strike out on their own and explore the lands.

In January 2019, Skeleton and Carnivore met Dahlia de le Poer, who told them a bit about The Cartel. Intrigued, the pair investigate the loner band. While Skeleton is eager to join the group, Carnivore has cold feet and decides against joining. After a particularly explosive falling out, Skeleton joins The Cartel in April and parts ways with his sister.