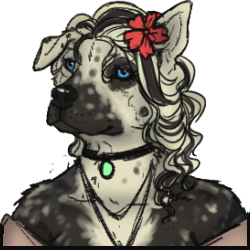 Josephine LaBelle, also known as Josie, is a southern belle who rocks the fence between sickeningly sweet and a snake in the grass. By 3 years of age, she had traveled North America, taking in one adventure after another. Along the way, she picked up Theodore Hudson and has been taking care of him ever since. Her passions include feeding anyone who will let her and making beautiful clothes for trade. LaBelle is a proper lady and caregiver to everyone she meets, but be careful not to get on her bad side. Thanks to her early interest in tailoring, she has a basic knowledge of working with leather and furs, and dabbles in making leather armor, though she has much to learn!

Josie was born in the southern United States of America, to a woman who taught her to behave like a proper lady. When she grew to be a year old, she decided it was time to leave, wanting to take in more of the world. Over the next two years, she traveled throughout North America, eventually coming across a young boy who had run away from his family out of anger, Theodore Hudson. Originally they butted heads, but eager to take the grumpy young man under her wing, she eventually won him over over a few days of home-cooked meals. Together they continued to travel through Canada, until, one day, a group of loners in Halifax picked a fight with them. Josie was taken captive while protecting Theo. With the help of the Cavaliers, Theodore came to her rescue and brought her back to Casa di Cavalieri.

After a few nights rest in the pack lands, the pair decided to stay and help the Cavaliers deal with the Syndicate Revenge Conflict. Once the final battle was done, they decided it was best to stay where they were safe.

None, but can be discussed.

Theodore Hudson: Theo; travel companion; he came to rescue her when she was kidnapped by the Syndicate.