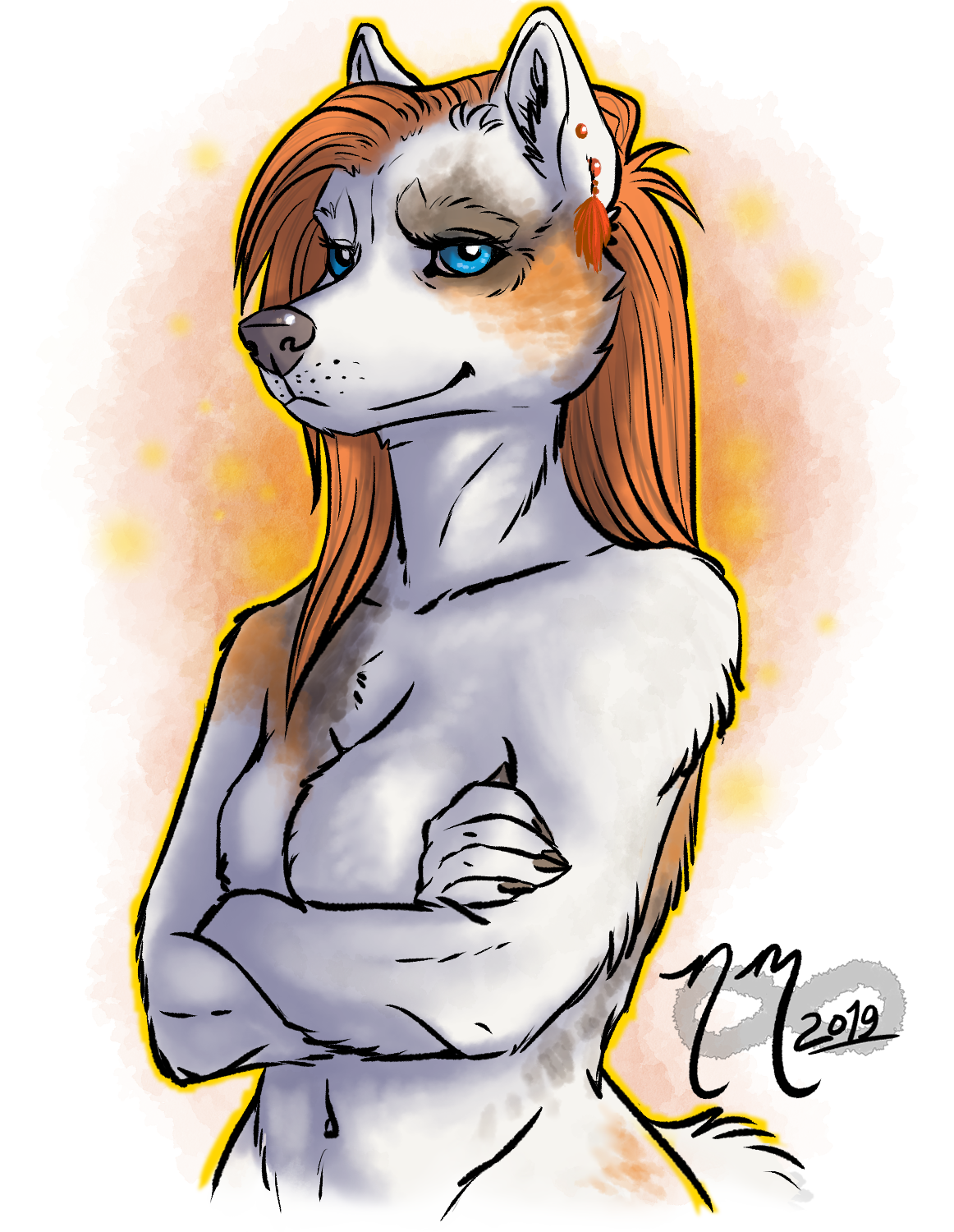 Indi Knight is the daughter of Lyris Stryder and Luca Knight, born in August of 2015 alongside her sister Teagan Stryder. Currently, she resides in the Casa Portland Outpost after deciding to leave Casa in early 2018 due to her mothers death. She is normally quite bubbly and social but she feels emotions very deeply. Indi is incredibly protective of her family, and believes that family is inclusive of her pack. At times she can be impatient and prone to thrill-seeking to keep boredom at bay. Due to her vivacious nature she often can come across as dim witted, despite her sharp mind. Will this feisty social butterfly decide it is finally time to return home? At first glance, Indi is a boisterous and friendly girl, the life and soul of any party. While she tends to blunder her way through some of the more intricate niceties of social convention with the delicacy of a bulldozer, Indi is extremely confident and comfortable in social situations and has a sense of natural charisma about her. Touch is very important to Indi with relations both close and casual; physical affection and roughhousing are fairly typical parts of her interaction even with light friends/acquaintances, and she can get down and upset if she is denied them.

Indi is extremely devoted to what she considers her family. She loves to be around her family and will go to any lengths to make them happy and protect them, often at her own expense. What Indi considers her family isn’t limited to blood, but extends to cover close packmates and very good friends in varying degrees.

Indi has always been a quick mover, using her body’s shape and strength to race around at blistering speeds. Physically, Indi is about as quick as a canine of her size can get – built with just the right combination of lightness and power – and her tendency for speed has bled over into how she thinks.

Indi is impulsive, easily bored, and extremely impatient when she is excited or wants something. Despite being far from stupid, she has a habit of making reckless choices just because she reacts to a situation or opportunity without properly thinking it over. Indi enjoys the sense of freedom and distraction when pushing her body and running, and so spends much of her time hunting or just running for pleasure. That said, she isn’t always in motion. She can often burn through her energy rather quickly, and tends to flicker between periods of extreme motion and periods of sloth and lethargy. One of Indi’s guilty pleasures is a good nap in a warm place.

Indi’s behaviour seems to suggest a minor form of ADHD, which becomes more prevalent when she is tired or stressed. She gets distracted very easily from things which don’t mentally stimulate her, and without a clear focus her thoughts tend to be rather aimless. However, on the other side of the coin, when something truly interests her she can often hyperfocus on it; putting all of her attention into activities that would usually bore her, such as reading, if the specific topic interests her.

To those who have first met her, Indi can sometimes come off as a bit dim. Part of this is because of her tendency to act or speak before she thinks, or because her attention might be far away from what is actually happening, but a large part of it is on purpose. Particularly if she feels threatened or wary - and sometimes out of habit if not - Indi has a tendency to purposefully play the part of the dumb, happy optimist; taking advantage of how it can put others off guard. This can make it hard to tell where you actually stand with Indi, as often the only real difference between how she acts with someone she likes and someone she doesn’t is often how genuine her emotions are, and Indi is good at masking the difference when she's in a stable mood.

In reality, while not a genius Indi is quite intelligent. She has a sharp mind able to puzzle through mental challenges rather quickly and is a very quick kinaesthetic learner. Her short attention span tends to hold her back from scholarly pursuits, but she does quite well with crafts and trades if given proper instruction to start with. One caveat to this is that Indi is used to picking up on simple things easily enough that she tends to struggle when faced with an actual challenge. This also extends to social situations; Indi tends to be very confident socially – if a bit blunt on occasion – but when she does encounter situations she doesn’t know how to react to, she can become flustered very quickly.

|| Pretty And She Knows It; vain, flirty, dismissive, manipulative ||

Genetics, luck, and an active lifestyle have given Indi an attractive body, and she knows it. Indi is extremely vain and always makes sure to take good care of herself. Insulting her appearance or ignoring her when she's preening are both good ways to annoy her. That said, Indi generally strikes a good middle ground between practicality and her vanity; she’s never above getting herself dirty having some fun or hunting, but she always makes sure to clean up afterwards.

Indi has a very casual approach towards romance. She can be very flirtatious and enjoys herself greatly when flirting with and teasing/embarrassing others, but overall tends to place very little importance in the whole thing, and views it as little more than a casual amusement. As such, her attentions are typically brief and based purely on physical attraction, the object of her interest ever-changing. Indi isn’t above using the romantic urges of others to manipulate them if she wants or needs something, and doesn't quite seem to understand just how much she can hurt others acting like this. If Indi is genuinely interested in someone as an actual romantic partner she tends to be more hesitant and awkward around them. She will still attempt to flirt, but in general tends to take a much more passive role around those she is genuinely interested in.

Despite the happy face she shows the world, Indi is actually very insecure in herself. She is her own harshest critic and she absolutely hates failing at something she is genuinely trying at, to the point where tiny, meaningless failures can infuriate her. Surprisingly, Indi is rather good at taking criticism and correction from others as long as it is well meant. The problems come later, when she mentally tears herself apart over any small failures she can’t fix quickly.

It doesn’t help then, that Indi is almost obsessive about hiding any negative feelings she is feeling from the world. Indi hates situations where she feels as though she isn't in control, particularly when she can't control her own emotional outbursts. If Indi is stressed, sad, or feeling anything except the happy, confident face with which she displays to the world she would rather continue her act than reach out for help. If she fails to conceal her emotions like this it can be a self-reinforcing cycle, with her shame and embarrassment at the public display making her feel even worse. This tends to lead to Indi actively bottling up all her negative emotions without any release, often leading to some spectacular displays of temper when she finally boils over.

Tea is currently the only person who Indi will sometimes open up to, though even then she still feels embarrassed and ashamed about her feelings and hides much of them. Even around the rest of her family Indi tends to be rather closed off; usually too concerned with impressing her parents, aunts and uncles to show any weakness to them.

With a few exceptions, Indi’s temper is a slow and difficult thing to rouse, but it is a thing to behold once risen. When truly angry Indi has a vicious streak a mile wide, made all the more worrying by her tendency to keep on smiling and playing nice right up until the moment she plunges the – usually figurative – dagger into someone’s back. These grudges can last a long time; when someone does something to truly anger Indi, she is very slow to forget or forgive. Indi has a nasty sense of revenge, generally preferring some course of action resulting in social ostracisation or personal loss to simple violence. A few things - hurting or threatening Indi’s family chief amongst them - can provoke an immediate, violent reaction.

For the most part though, Indi tends to play to her strengths and avoid violence, approaching most confrontations where she is calm enough to control herself as a diplomat before a fighter. However, when she does feel that violence is necessary, Indi is merciless and practically the dictionary definition of ‘dirty fighter’. She will typically aim to kill or maim straight from the start, and will make use of any dirty tricks she can to offset her lack of strength. While she is generally too weak to take advantage of the fact, Indi finds violence and bloodshed very cathartic when she is stressed, and will sometimes lash out at prey animals or - much more rarely - those weaker than her to blow off some steam.

Indi pays lip service to the gods of her family, but goes along with the ceremonies just to feel involved, and invokes their names more through habit than any true belief. She tries not to really think about the concept of there actually being a deity; the idea of something omniscient watching over them scares Indi. Subconsciously she has some measure of belief in something, but purposefully refuses to explore these thoughts.

* Does not know this person by name. Nicknames that Indi uses to refer to somebody are included in (brackets) next to their name.

Indi is the daughter of Lyris Stryder and Luca Knight, born in August of 2015 alongside her sister Teagan Stryder. She resides in Casa di Cavalieri as a Guarire.