Carya Aston is the daughter of mates Anu and Tayui Aston (biologically Tayui and a male wolfdog). She is currently a loner in the Northern Tides. She was born alongside her three littermates Andira Coeur, Valerian Coeur, and Auguste Aston in Vinátta on December 31, 2012, and was the first of her litter to shift. Carya has had a litter of still born pups in 2016. She has more recently lost her previous litter from Belial as well 2018. And then has had one still-born child, and then three of which died shortly after birth in 2019. She has two surviving pups, one of which resides with her and the other who is thought to be dead.

Carya returned to 'Souls in January 2020 accompanied by her daughter, Aani Aston-D'Noires. By March 2020, Carya and Aaani had joined the loner band, Bête Noire. In mid-October 2021, [M] she was slaughtered by Wrath at her eldest daughter's behest. 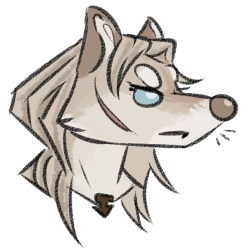 Carya Aston lives in the nomad territories, and is usually found wandering around the Northern Territories.

Carya has had a significant change in personality. She is off-standish, and cold on the exterior to strangers. Her recent death experiences with her children has led her to train her only living child to be fierce and not afraid of anything. Always on the move and always cautious of everything that is surrounding them.

She is very protective of her daughter as she is constantly worrying about if someone might kidnap her like Judas did to her, or if her child may die like all her others.

Since she left in 2017, she has developed a smart-ass remark and a smile for everyone she has know before and reencounters, as well as a reoccurring anxious and constant worrisome exterior.

Because of her past relationships, Carya has since then decided that perhaps she might be interested in females. She isn't quite sure where the new feeling has come from, and perhaps is more bisexual than anything.

Carya can be described as neutral good with chaotic tendencies. She also has a developing anxious habit to where every little noise (at night) makes her nervous.

coloured by Tammi, template by Despi

Carya has an off-white coat that appears slightly darker in the summer months. During the winter, it fades almost completely to white save for small spots of colour throughout her fur. During the summer, it is an off-white soft amber, which dominates her back, neck, shoulders, and the top of her head and tail.

Carya's ears are erect, but are rounded and less furry like a koolie's. Her coat is long and thick like a wolf's, but her tail is much thinner and less furry. She also has a slight slope in her back and a thin, narrow muzzle from her koolie heritage. Of all her siblings, Carya is the one whose build most strongly reflects her dog heritage. Despite her obvious dog influence, she displays the size and bulkiness of a wolf. Furthermore, as the second-born, she is quite large in size.

Carya has developed several scars from which she's obtained thanks to many events in her past. Such as being kidnapped and gaining her scar across her face.

Carya and her siblings by Alaine

Carya was born on December 31, 2012 in Jordeheim. In Old Vinatta lands. She lived there happily, until she was kidnapped by Judas and tortured. In so, she aimed to become the very best she could be and trained and fought every day. She developed weird little feelings for everyone within Vinatta, until she met Belial Massacre at which she began a relationship with the coyote. Soon after she became pregnant she lost the litter, and was too ashamed to face him.

Finding herself beside herself, she began to stray from Vinatta, and stray from the lands. Finding herself in pickle after pickle her and Belial eventually met back up, where once again, they lost another litter of puppies. She was beside herself and after the incident with Izual near the Vinattan borders in 2017 where she finally disappeared into the lands of North American.

Carya became addicted to opiates and to alcohol, where alot of her memories are blurry. She eventually found Belial (she was unaware it was him as she was heavily intoxicated and medicated) and made love to him, thus producing her last litter of pups.

Upon finding out she was pregnant (after the first month and a half of pregnancy) she left the drugs behind, and gave birth to six pups. Aani, Sarin, Delilah, Daniel, Falon, and Belina. Her children Belina was a still-born due to her drug usage. Her other child Falon was dead within two days due to her drug usage as well, during the very beginning of her pregnancy. Daniel and Delilah were her "twins" where as, Sarin and Aani looked like her side of the family coated with the browns and Sarin looking eerily like Belial Massacre.

Carya didn't tell her children about their father, simply calling him "Gus" when they asked and giving Aani the surname of "D'Noires" as she was curious about their father from birth. Sarin, being the favorite child, Carya coddled.

Upon the children dying and growing up, Carya became paranoid and mean, to everyone looking in. Her children should love her and aren't allowed to leave her. She taught her only living children Sarin and Aani how to hunt, how to fish, how to read and write, and how to lie, and manipulate others, as well as track and hide their scents. Their main source of survival, was to run and then when they couldn't run anymore to fight. She couldn't bear losing any more children.

When Sarin was about 8 months old, he was thought to have drowned in the waters of a river they were crossing. Searching for days, and days she was unable to find him. Sadly leaving and moving on from the North American lands of what was once Maine, she made her way back to 'Souls, finding it to be a better environment for her and her only surviving child.

Aani and Carya traveled back to 'Souls, after the death of her other children, and they have resided in the Northern Tides since the beginning of January 2020.