Vinátta's culture is inspired by the Vikings and have perhaps transported back to these simpler times. Farmers, traders and home makers, the Norse were near self-sufficient and dabbled in all manners of skills, which Vinátta have tried to incorporate. Vinátta remains a peaceful place to live, encouraging aspects of contribution and learning. As well as mastering skills and producing items for the pack and for trade, Vináttans are renowned for their building skills, using methods from the Old Norse ages to make their buildings not only strong but traditional.

Vinátta has a rich culture and celebrates many holidays throughout the year. Religion and worship are entirely left to an individual's discretion; There is however an undeniable influence of Old Norse culture present, as the pack's spiritual advisor (the Godja, Miskunn Stormbringer) and other relatives from Solbjorg Valley (the prominent Stormbringer family), firmly believe they are descendents of the mighty wolf Fenris, eldest child of Loki the trickster. As oral tradition and Luperci knowledge have changed the original human mythology, the tales of gods and other realms have evolved alongside them. The holidays and traditions celebrated in the pack are largely derived from those of the Solbjorg Valley, but have been adapted to suit Vinátta's cozier setting.

While religion has a strong base in Vinátta, it is not a prerequisite and Vináttans are encouraged to share their beliefs (or non beliefs). Vinátta prides itself on encouraging freedom of speech within their ranks. If members choose to convert, these are some of the basics they can learn about from the Godja. There are a vast number of deities in the Norse pagan pantheon; below are listed the most well-known and influential. Their blessings may be invoked at pack ceremonies and rituals, but those unwilling to participate personally are still encouraged to attend. In the human tradition, the sacrifice of livestock was a common offering to pay tribute for the bounty of the season, but the Luperci of Vinátta prefer to feast on wild game to honor their wolf ancestors as well as their spiritual leaders. Some choose to devote themselves to a particular patron/matron deity that holds great influence over their lives (for example, a blacksmith would honor Thor). This relationship is called fultrui, and signifies that one's trust lies fully with their god/goddess.

1.1  Horgr and the Sacred Grove 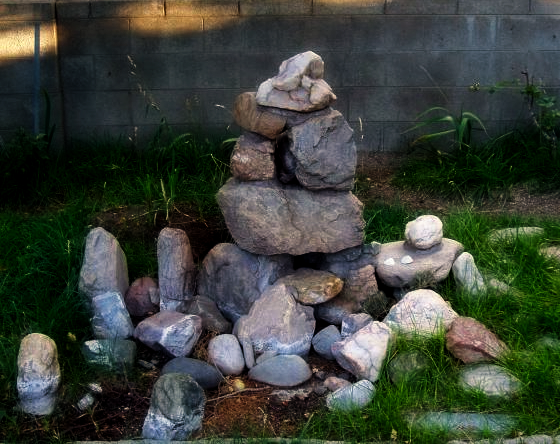 A Horgr is an altar of sorts, consisting of heaps of stones. The Sacred Grove remains the spiritual place of worship and is maintained by the Godja Miskunn Stormbringer, who also lays the Horgr. Members are free to worship any gods here, or to seek the Godja out for advice and help. Disruption of the Horgr is a punishable offence and with the Godja guarding the altar carefully, it is a foolish endeavour.

Frithr (meaning peace) necklaces are small wooden charms presented to new members in their Welcome Packs. They symbolise a new beginning for the member, a visual representation of their acceptance into the pack and as a ward for superstitions. Frithr necklaces are made from the White Walnut tree in the Sacred Grove, a little piece of the figurative Yggdrasil (world tree). They are in the shape of the pack symbol- a miniature Thor’s hammer polished smooth. Frithr necklaces are frequently found handled by their wearers- they are believed to be wards for superstitions.

Odin is the All-Father and ruler of Asgard. Odin is a principal member of the Aesir and is associated with war, battle, victory and death, as well as wisdom, magic, poetry and prophecy. He is the God of Thought and Logic. Common forms of worship include; praying for victory ("May Odin lead us to Victory") as well as prayers for wisdom and prophecy ("May Odin grant me the wisdom to..."). More?

Thor is the son of Odin and considered a formidable warrior. Thor is associated with thunder, lightening, storms, oak trees and strength, but also healing, fertility and the protection of mankind. Thor is the God of Thunder and War. Common forms of worship include; praying for weather ("May Thor grant us good weather/bad weather"), praying for strength ("May Thor give me strength"), praying for healing ("May Thor heal you") and fertility ("May Thor bless this pregnancy..."). Note; Freyr is also associated with Fertility and may also be prayed too. More?

Loki is universally known as the Trickster and is recognized as the God of Fire. Loki is associated with trickery, mischief and deception as well as independence. It is accepted that Loki is a necessary force to bring about change and to challenge the order of the Gods. Loki is also the father of Fenris, whom the Stormbringers believe they are descended from, and is worshiped as such. Common forms of worship include; praying for deception ("May Loki guide me in shadows...") as well as praying for change ("May Loki turn the hands of fate and grant change to these lands"). More?

Freya is considered to be the Goddess of Love, Beauty and Compassion. She is also a warrior, known as "The Queen of the Valkyries", and is perceived as being the embodiment of female power. Freya is believed to hold Cats, Birds and Boars sacred and was known to have had a chariot pulled by cats. Prayers of love, lust and child blessings are those sent to Freya- ("Freya bless this child with your love"). More?

Freyr is known as Freya's twin brother and both are notorious for their beauty and compassion. Freyr is depicted as one of the most important gods in Norse mythology. Freyr was associated with sacral kingship, virility and prosperity as well as sunshine and fair weather, and was pictured as a phallic fertility god. Common forms of worship include; praying for good weather ("May Freyr bless this day with fine weather"), prayers for prosperity ("May Freyr bless this crop and give us good harvest" and "We thank Freyr for this good harvest"), and prayers for male performance. More?

Members of Vinátta are encouraged to celebrate holidays and festivals, and have something of a reputation for their grand parties. Every member is free and welcome to attend, as even non-believers find these celebrations provide an opportunity for pack bonding and feasting regardless of religion. They are generally joyful occasions and rarely formal.

Once the harvest has been brought in and stock is taken, Vinátta looks to trade their excess items just before the start of the winter. Theirs is a ‘medieval’ style village with aspects of self-reliance where there are means to make or grow most items. Vinátta boasts ownership of a large Vineyard and Brewery and will start to make their own alcohol for their own consumption as well as trade. While not an overwhelming aspect of Vinátta, as with all social structures they are interested in trade and use the Market Place for such transactions. All new members are greeted with a Welcome Pack to start getting them assimilated in the pack and are given a house in Jordheim if they choose. Within the Village Hall, an Almanac is constantly updated, giving an impartial record of events since Vinátta’s founding. Furthermore, within the Village Hall, a large map covers an entire wall and this is also constantly updated for all changes made to the pack.