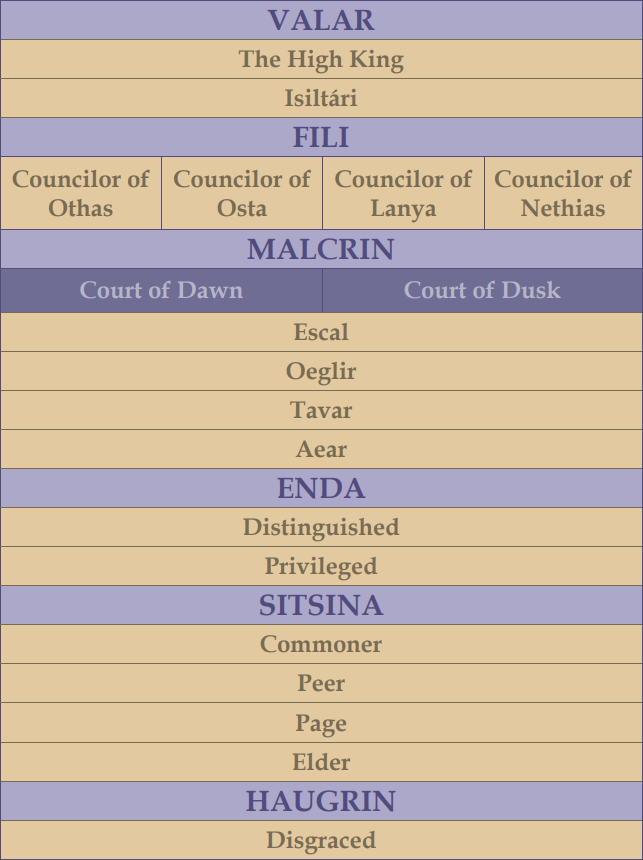 New Caledonia's ranks are centered around the court system of feudal Europe and possess a hierarchy strictest at its lowest tiers. Emphasis is placed on attaining a noble title and thus such lords and ladies possess the most freedom in their everyday affairs. Rank names are inspired by languages from high fantasy and often refer to the geography of New Caledonia.

Promotion requirements vary between ranks. Activity is measured in IC posts per month, but some have additional requirements, such as earning a certain tier of co-rank. Characters may be demoted if they show poor activity (>5 posts) over a few months.

Ranks are listed below in order of highest to lowest in the form of six tiers: Valar, Fili, Malcrin, Enda, Sitsina, and Haugrin.

The High King is the ruler and figurehead of New Caledonia. First elected during war-time, the High King passes on his name and rank by adoption, blood, or marriage. The King has the final say in all matters of state; his is the guiding light that unites the disparate pieces of Caledonians new and old.

Once known at the Lord-Regent, the subleader position now goes by a newer, more personalized title: the Isiltári, or 'Queen of the Moon.' It is likely to go by another name, should another rise to this position in the future.

This is an individual hand-selected by the King from the seat of high Nobility. They act as co-counsel to the King's affairs and as a public official to the Realm. If the King is outside of pack lands, indisposed, or passes away, the sub-leader assumes their authority and rules in their stead until the King returns or an heir is found. The Isiltári works closely with the King to ensure the health and prosperity of the Realm, and heads a great many matters of state. Very little is outside of their authority.

The Fair, Councilors of the Realm

The Fili are highly ranked individuals who have proven themselves to be the upper crust of the nobility. The four Councilors have pledged their allegiance to the High King, and are expected to attend all pack events. They are also able to accept newcomers into the pack. Each member of the Fili is assigned jurisdiction over a District which aligns with their skills. Councilors are not expected to be masters of all trades, but should have at least one Tier III corank that aligns with their chosen districts overall theme.

3.1  The High Nobility in The Courts of Dusk & Dawn

The high nobility are split into two courts, the Court of Dusk and the Court of Dawn, representative of the nobles' values and priorities. Whether traditional and pious, or progressive and inclusive, every noble can find their place. Refered to in title as High Lord or High Lady, these esteemed nobles are the epitome of class and charm, representing the core values of New Caledonia in their every endeavor.

It is important to note that nobles need not uphold or represent all the values of their court; they may choose whatever they feel suits them best and will likely fit among a spectrum — some more conservative than others.

Named to honor the four clans, members from the Enda are promoted into this rank once they have established themselves as well-respected members of a local guild, or by bringing honor to their name through quest completion.

Other ways to be promoted into this rank are: marriage, adoption, or bribery.

The Nobles are split into four sections: The Escal (The Veil of Clouds), The Oeglir (The Mountain Range), The Tavar (The Woodland), The Aear (The Sea). These names represent the journey from sea to sky, and consistent activity will see you through each level.

Note: All characters rising from the Escal (The Veil of Clouds) into the High Nobility must pledge themselves to The Court of Dawn or The Court of Dusk. Depending upon this allegiance, they will be titled as a High Lord or High Lady of the Dawn or Dusk, according to their preference.

The Enda is the heart of New Caledonia. This is where Caledonians begin to make names for themselves. In this rank characters begin to collect honor either by joining or starting a Guild, OR by completing quests. This is an excellent rank for members who wish to master their co-ranks and grow the influence of their Guild and name. The Enda ranks are split into two sections: the Distinguished and the Privileged.

All members start in this rank upon joining New Caledonia. They are pledged to no Court and instead use this time to learn about the realm's history and developing culture. Here they solidify their relationships and interact more with the Enda. This is where members first begin to associate with Guilds and start earning their co-ranks. Commoners may be called upon to work for the nobility and are looked to shoulder the burdens of labor and the more menial tasks of day to day life.

Promotion Requirement: Characters are promoted from Commoner to Privileged with 10+ posts.

This is where pNPCs and cNPCs will linger. yNPCs that are 1 year or older will also be ranked as Peers.

Page is a rank reserved for children. Children of the nobility (Malcrin or above) ascend to the ranks of the Enda upon reaching 1 year old. Otherwise they move up into the Sitsina tier, starting their adult life as a Commoner.

A rank reserved for the oldest of members (9+ years) of New Caledonia. The Elders are known for their wisdom and quiet servitude. They remain in this rank indefinitely.

Those banished from dwelling amongst the law-abiding members of the Realm are sent to the Underthing to do penance for their crimes.

The Underthing is a deep dark hole to the north of the Enedwaith. New Caledonians who run afoul of the King or Shadow Council's favor are banished to the Underthing as punishment for their crimes, and they are branded as Disgraced.

Characters who live in the Underthing maintain the ability to create Guilds and earn co-ranks despite their status. Some members willingly choose to join the Underthing based on their predisposition to the darker arts. It is a little known fact that some Caledonians flock to its seedy core knowing full well that a certain clientele lurk deep within its depths.

Promotion Requirement: Characters are promoted from Haugrin at the IC discretion of the King and Shadow Council.