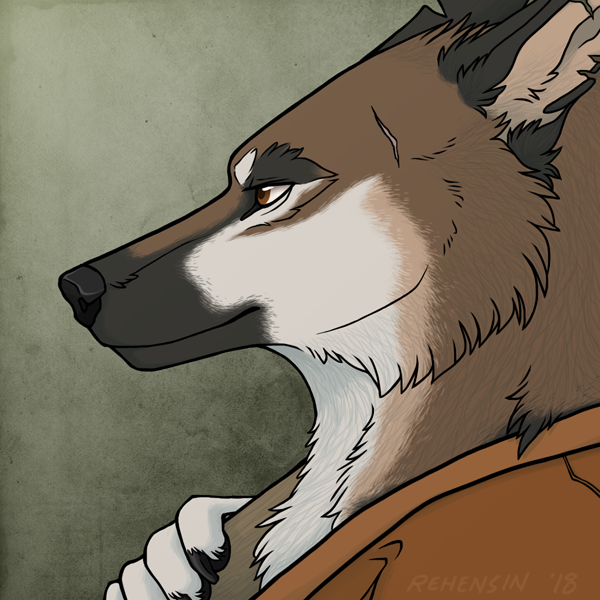 Velimir Voronin was born in Mongolia to tribe of Luperci that called themselves Eagle Tribe. He was raised to be a bodyguard to the group’s leader, and became an exceptionally skilled fighter as a result to his duty and the region’s naturally chaotic atmosphere. A conflict-gone-wrong drove him to flee his homeland with his assigned ward in tow. They fled west, chased by their enemies, and eventually bartered their way onto a boat heading to the New World. When Velimir’s ward died in-route, however, he was left in a foreign land alone, and without a purpose in life. He eventually made his way to Portland, where he met Heine Kaiser. After months of interaction, the father and Velimir eventually came to an arrangement where Velimir would look after Heine’s daughter, Kamari Kaiser, and act as both her teacher and as a protector where Heine could no longer serve.

He is currently a member of Salsola, ranked as a Warden.

Outside of the pack, he assumes the name “Khenbish,” meaning, literally, “nobody,” which he finds to be very clever and amusing. When accompanied by Kamari, he typically disguises his scent to match her own to keep the ruse that they are related. Alone, he usually adopts rather neutral scents that help him be easily forgotten or not stand out.

Velimir was born within a sizeable tribe of nomadic horsemen that, in the region of Mongolia, were known as the Eagle Tribe because of their quick and ruthless fighting style. The Tribe laid claim to an ever-fluctuating and ever-shifting size of land, as the area was often wrought with conflict as tribes warred with one another over ownership of valuable resource areas, particularly, the great, expansive plains of the steppe. The Eagle Tribe, as with many of the tribes, were led by a Khan, an individual of formidable fighting prowess, leadership skills, and military mind. His father’s family came from a long line of individuals loyal to the Khan of the Eagle Tribe, from a line that had pledged their sword since the tribe’s formation, and one that had protected the Khan for generation after generation thereafter. Velimir was trained from a young age in how to fight so that he would eventually protect the Khan as his father did. From his mother’s side, Velimir was raised with monk-like teachings as well as other seemingly menial talents. Velimir grew into a formidable ally to the Khan, and when the Khan bore a son, Bayar, Velimir was assigned to both teach and protect the growing boy.
Things were never peaceful within the Eagle Tribe, however, there were times where it was quieter than most, and most of Bayar’s young life was during such a time for the Tribe. The region ever at war with their neighbors though, the calmer times did not last. Tiger Tribe, reborn and reformed under a new Khan and with strong, powerful, and large wolf fighters from beyond the northern mountains, descended upon the steppe. They viciously attacked the smaller tribes, and systematically destroyed any that were even tentative allies with Eagle Tribe. The Tiger Khan wanted retribution for her tribe’s previous defeat, and Eagle Tribe was her target. When Tiger Tribe descended upon Eagle Tribe, the Eagle Khan had confidence that they would defeat Tiger Tribe as they had in the past. He was wrong though, and when it became clear that Eagle Tribe would be decimated by this old foe, he ordered Velimir to take his son, Bayar, to safety. The pair fled to the western mountains, hunted down tirelessly by Tiger tribesmen ordered by their Khan to retrieve the Eagle Khan’s heir.

Every time they thought they had outrun them, they’d be found again. The Tiger tribesmen were able to chase the pair far beyond their home in the steppe before they eventually abandoned their task. Hunted endlessly, Velimir and Bayar had become paranoid with their pursuers’ presence though, and their fear of capture or death drove them only further west. Eventually, they found their way into Europe, where they settled briefly before a scare drove them to take a ship to the New World. Bayar would never make it though. The Eagle Khan’s heir became deathly ill during the voyage, and eventually died, leaving Velimir to make landfall not only alone, but in a foreign land. Having nothing to return to in the world he had left behind, Velimir decided to pursue the monk-like lifestyle that had been introduced to him in his younger years. He eventually made his way to Portland, where he met Heine Kaiser.
Being a man from Salsola, their initial meetings were done under Heine’s alias, Jaeger, and it was only after their trust and relationship grew over the spring and summer months of 2018 that Heine eventually reached out to him about the idea of Salsola. Initially, Velimir had little interest in joining a new group, content to live out his life quietly and become forgotten from the world. However, he felt a force pulling him in the direction of the Kaiser couple, a force he believed was the universe giving him a second chance to protect another. The couple’s daughter, Kamari, was alone back in Salsola proper, determined to bring honor to their family, even if it had meant sacrificing her own freedoms. Velimir was moved upon finding out the couple’s torn feelings between supporting their daughter, or trying to find the whereabouts of their runaway son.
Promising to look after their daughter, Velimir made his way to Salsola proper.