In a small pocket of the world, where verdant hills of emerald splendor stretch from shy groves to a misty shoreline cut jagged by cliffs and bluffs, the first sons and daughters of Macha took up their trades; And the names that would be their vestige of immortality, bloodlines that would run as straight and pure as the land itself.

Among these early pious congregants was a wise man with vivid blue eyes. He took the calling Winters; For the frost and the quiet, for the time of eternal contemplation and eventual renewal. After the great tribe-wars, this ancestor had only one living child, and that child only one living child; And so eventually the Lost Son Niall was born alone into the world, with only he to carry on the old name Winters.

Thankfully, Niall was a prolific and warm sort of man. He grew with great love in his heart, and brought back to life a bloodline long thought dead by others of the Silver Valley. With joy, the Winters line again began to prosper, forming the stronghold and the beating heart of the Macha Tribe as is their duty and destiny.

In recent ages, the Winters line has been further strengthened by the union between Macha daughter Alaine Winters and her chosen beloved, Chief Gabriel de le Poer. Many strong children have come from them; But with their father's own cursed blood they have also been driven to wander, as very few from the Winters line had been inclined to before. Once isolated to Airgid Gleann, the favored name of Macha has spread with grace to many lands abroad.

A token of the old world lives still within the veins of those blue-blooded descendants of the first Winters; Manifesting itself most prominently in the women of such heredity is a curse and a blessing known as "The Sight". In dreams, sleeping or waking, these few chosen might think they see snippets of a truth in future or past. The Sight can often be vague and disconcerting, and is not easily managed or translated.

It is also said that any of the line can call upon the great ghost of Macha, the White Stag/Blue-moon Stag, in an hour of great need. This ghostly emanation has been called to power only once in recent times, when Alaine lay a heavy curse upon the life and following kin of Ezekiel de le Poer, that they may be haunted and hunted by the stag in vengeance for the murder of her first son, Caillen Winters, dealt by the hand of Gabriel's son himself.

For now, the ancient bloodline of the white stag can be found in Salsola, where the royal children of Queen Salvia Eternity and her Isle-born consort Stannis de le Poer were brought into the world with white throats, blue eyes, lean collie bones or elfish collie faces. Their lineage is old and regal on both sides, and their children's children will be born with rich dream-memories of a land of green rolling hills and a winding silver river; And a guardian presence that will follow them through their spectacular lives, scarcely seen but always felt, like the shadow of great antlers cast by the light of a full moon.

PLEASE NOTE: The parent that contributes the Winters genes is bolded.

Please keep in mind that the information regarding physical attributes for Winters-blooded individuals is not strict - Variations beyond the below-mentioned similarities are common and welcome. 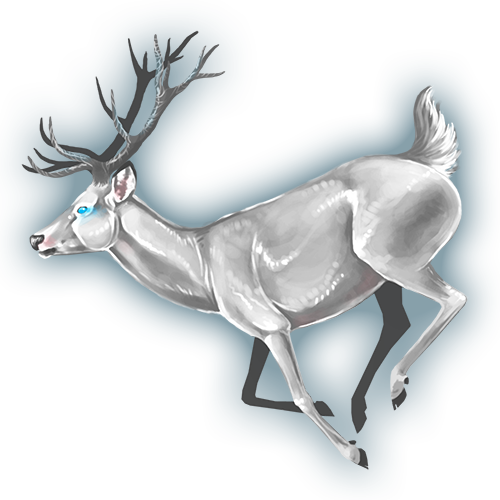 The Macha tribe is recognised as being the oldest, and wisest, of the tribes of Airgid Gleann. Its defining characteristics are wisdom and an elfish, exotic beauty. Often seen as the 'Neutral' tribe, for its past tendencies to be involved in conflict (with the Badb tribe in particular) but to generally refrain from most interaction with those outside the tribe, Macha people are rarest to find in the Silver Valley. At one point, it was believed that they had been totally eliminated through warring with the Badb and through raids from foreigners, but after the re-surface of the lost son Niall, the Winters family remains the only surviving blood-line of the tribe. Originally, the tribe was 100% Canis Lupus Familiaris (assumed collie), but that has since diluted.
For more information on the tribes, please see Airgid Gleann.

Throughout the history of the Silver Valley, and in turn the passing lives of those with Winters blood, there has been a constant presence - A quiet guardian, believed to be the old spirit of one of the three first children of Morrigan. This ancestor took the honored and sacred form of his tribe upon death, and has surpassed any mortal history to live on as a legend. The White Stag, a heraldic sigil of the Winters line and the mythological form of Macha (the first son), lives on in the culture and fables of the Winters family.
Resurgences of this legendary figure have arisen all throughout the recorded ancestry of this family line, most commonly linked to the birth, life, and death of one blessed by the Sight. The guardian of the Macha Tribe has been known to haunt those accursed by the sons and daughters of Macha, and hunt them through their existence and the existence of their children and kin. S/He is also often present in the most dire times of need, appearing as a specter to the true-blooded when called.
ICON INFORMATION
Categories: Airgid Gleann | Alaine | Dog | Winters