The Damaichu family started small and was once thought to be extinct until recent events, when many descendants came to light. Its history is intertwined with the roots of early Bleeding Souls history, as Fireside Ruby Wolf (Ruby Damaichu) was the founding leader of Silent Dawn. They therefore have links to many other old families.

It is important to note that a characteristic of the Damaichu family is the tradition of painting a family mark around the right eye upon their ascension to adulthood. It is a sign of solidarity to the old way of life for wolves. The mark can vary in color and shape but is similar enough to mark the individual as part of the family. This tradition was started by Ruby on the death of her parents and kidnapping of her brother, Zulifer. The entirety of the family knows of this tradition; only Ruby's direct descendants actively practice this tradition. 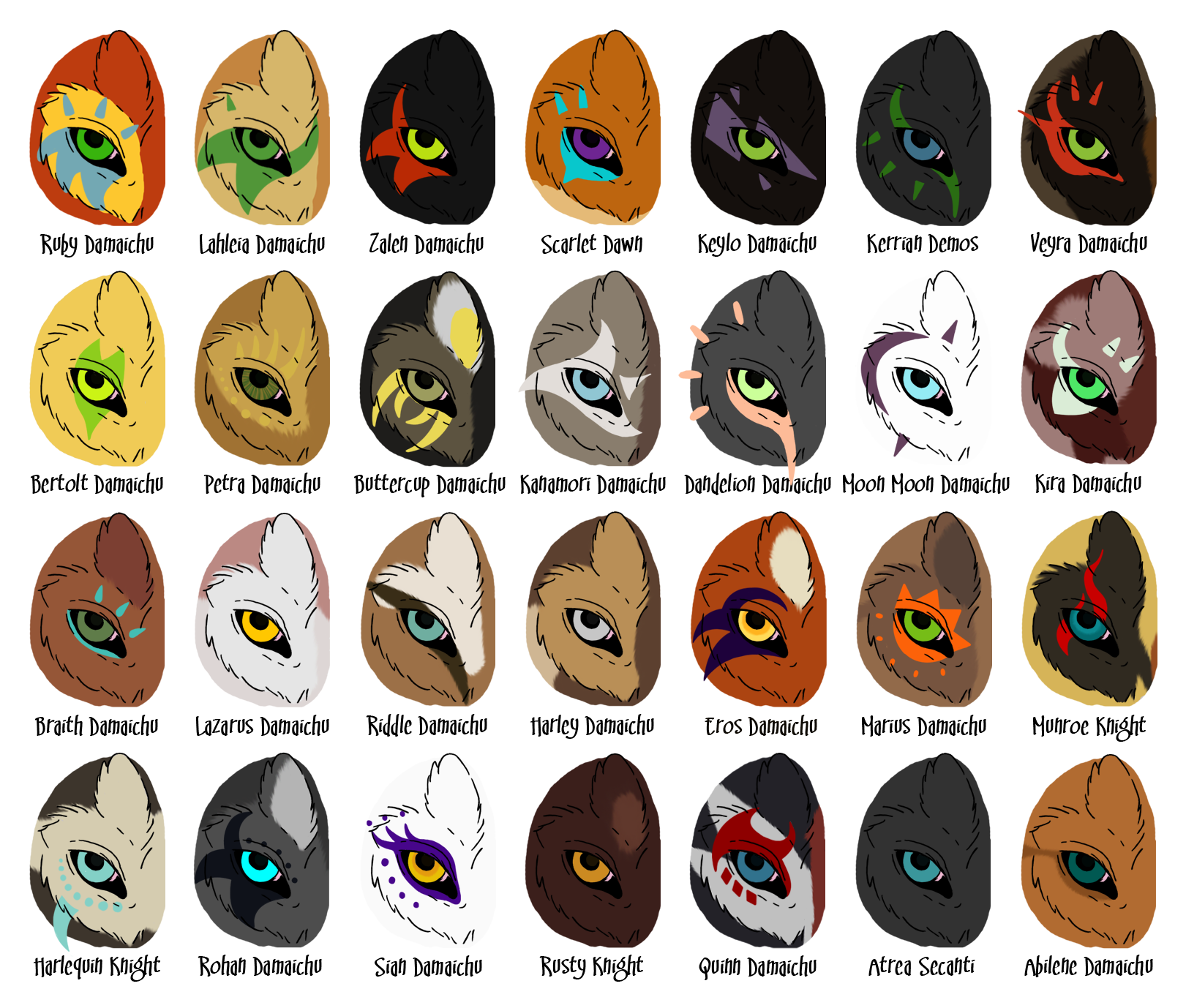 Zulifer Yfel and Fireside were siblings until their pack was attacked. People died, Zulifer was kidnapped, and they were separated. Eventually, Zulifer ends up in Bleeding Souls territory, and hangs out there for a while.

By a miracle of chance, Fireside ends up in Silent Dawn. Zulifer absolutely does not recognize her at first—though he has been searching for her most of his life—and dismisses her; when it later comes to light, he joints Silent Dawn and lives there for a while, generally unhappy with the setup but willing to be happy for his sister.

Fireside eventually starts to drift out of Silent Dawn and Zulifer follows suit, by chance encountering Kaena Lykoi on the way out of the land. They make a good impression (to say the least) on one another, and he continues to try and find his sister. After about a year of searching, he figures screw it, she left anyway, and heads back to Bleeding Souls.

Once here, Zulifer encounters Kaena once more and they have happy fun times and make children. Only, Zulifer is killed by Salvaged Eternity just a few days before Kaena gives birth to Kerberos Lykoi and Maeryn Lykoi, which marks the "official" foundation of this family within 'Souls. Maeryn is mysteriously killed, however.

Lahleia shows up in Storm around 2005, and Kerberos was also around at roughly the same time. Both disappear, and the Daimaichu line has seemingly petered out.

Emergence of a New Generation

In July of 2011 a black wolf called Zalen arrives to 'Souls. He is the only child of Lahleia with an unknown father, presumably the outcome of a rape. He was raised by Lahleia in lands to the South West of Nova Scotia and had no knowledge of his family's tie to 'Souls history, nor was he even aware of the surname Damaichu, when he arrived. These facts were shielded from him by his mother to protect him. However, in August of 2011, Zalen was visited by the ghost of Fireside Ruby who reveals his heritage to him.

Spurned by what he had learned, Zalen took it upon himself to not let the legacy of his family die. So he took on a mate, Titania Moonsong, and together they formed the pack New Dawn. Sadly, Titania miscarried her first litter, and abandoned the pack rather than face her mate's disappointment. Zalen fears once more for his family's legacy, and chooses to sire offspring with his packmate Adonia Demos as well as his friend from another pack, X'yrin Exultare. Those matings are both successful, and the fifth generation is born.

Simultaneously, a second branch of the Damaichu line begins to resurface -- Kerberos Lykoi sired two litters that grew to adulthood away from 'Souls, and in 2012 those Lykoi children trickle into Inferni. Columbine, Helotes, Jacinto, and Ilusion make names for themselves within the clan, Helotes and Jacinto soon siring their own offspring. Kerberos's younger children, Elody, Helena, and Lowry, choose to make their homes in other packs.

A third branch of the family was discovered during a conversation between Zalen and Jazper Rhiannon-Knight.[1] Zalen's aunt Renee is revealed to be Jazper's grandmother, meaning all of the on-board Knights are Damaichu descendants. Zalen and Jazper are both overjoyed, and this strengthens the bond between New Dawn and Casa di Cavalieri. The patriarchs arrange for a mateship between Veyra Damaichu and Callum Knight to renew their familial ties.