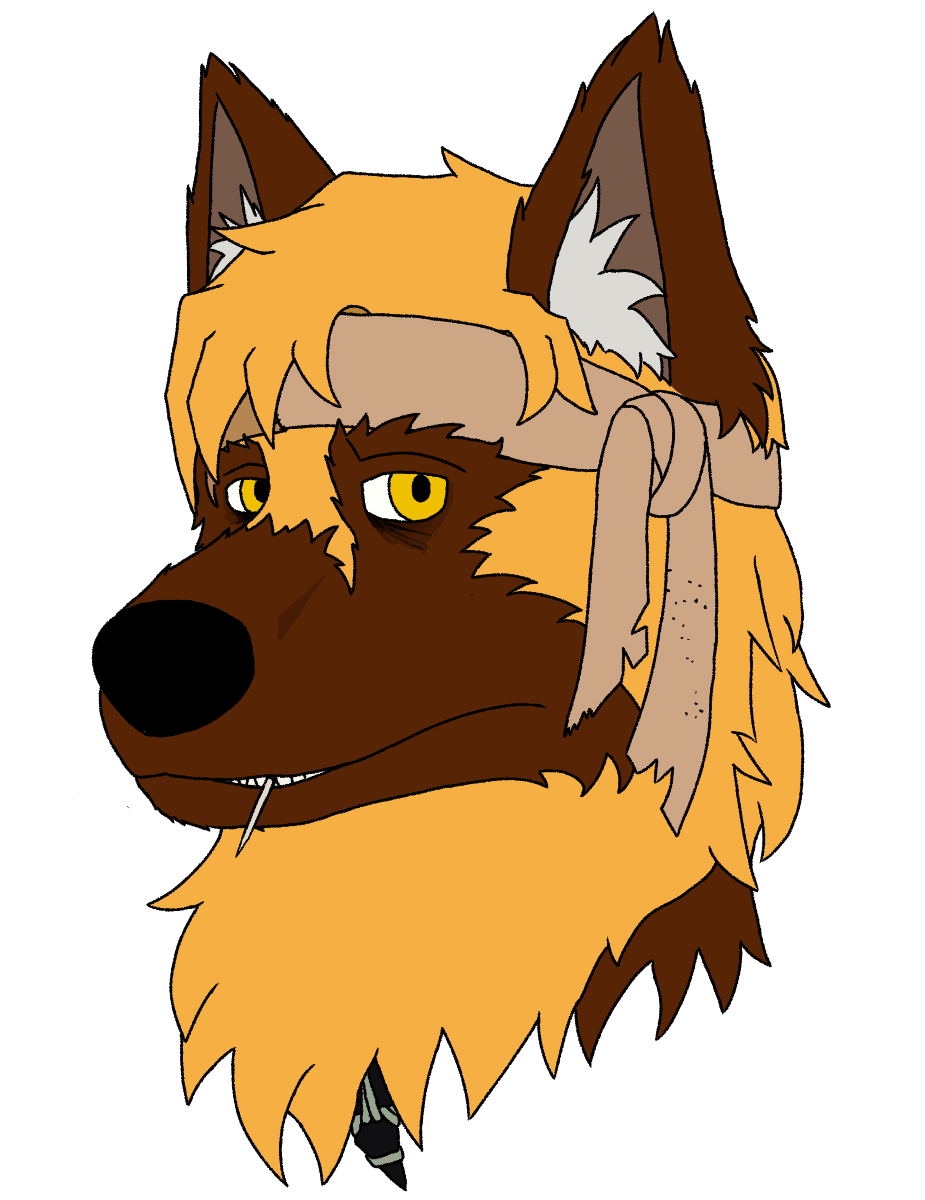 Wally was born in a pack to a seamstress mother and blacksmith father. Wally had a relatively uneventful childhood, passing the time by exploring the human ruins and learning basic medical knowledge from the healer. When finally able to shift into his optime form, he learned to sew from his mother and took to fighting with a spear. In April 2019, a pack of coyotes attacked the pack, resulting in Wally's forearm being burned.

In June 2019, Wally attempted to chase after a trader to acquire more human artifacts and fell into a river on the way back. Once on land, he attempted to travel back and became lost, eventually giving up on the idea of returning and decided to travel to the north. By October 2019, he entered eastern Canada.

In November 2019, Wally joined Mistfell Vale and resided in Winterwynd until the pack's disbandment in June 2020. The same month, he joined Casa di Cavalieri. TL;DR: Mellow and friendly with a bit of sarcasm at times. Is usually relaxed and can be mischievous at times. Prioritizes his own survival over all else.

Wally occupies room R4 containing a twin sized mattress and a small wooden stand. There is a quilt and a small folded blanket being used as a pillow on the mattress along with several furs while the stand holds his artifacts and some hide scraps. His knapsack and spears are leaned next to the door and seven arrows are placed all around the room. A tripwire has been installed in the middle of the room and several papers and other materials cover the floors.

Wally, named Walter Sherman, was born in a pack of roughly fifty other dog luperci at a police station in what was the state of New York with his brother. Most of the members worked in their optime forms and thrived, with new travelers joining as old ones died or left. His mother worked as a seamstress and helped make and repair clothes while his father was a blacksmith. His childhood was rather uneventful with him trying to help out his parents or exploring nearby human ruins alone. He was also educated on the "spirits", or beings that have given up their mortal bodies to transcend into godhood to guide the pack, leaving behind their past settlements to inhabit. While he loved his parents, he didn't care much for his brother, as the two frequently fought. He also felt useless with his current lack of opposable thumbs.

At four months, he developed a fever and was looked over by the new healer, who noticed Wally had developed a kind of depression and tried to cheer him up by saying he'll be more useful soon when he learned to change his form. The healer had also shown Wally his collection of old artifacts, spurring his interest in the old world. It was also at this point Wally was given a deerskin strap to be used as a headband to help him sleep during the day when he couldn't at night. He has worn it since.

At six months, Wally could shift into his optime form and was quick to learn how to use a weapon from his father (given a staff as practice but then taught on how to use a spear). He also worked more, both helping out his parents and the healer. He enjoyed sewing and became more dexterous as a result while taught about healing others, though he mostly learned how to diagnose physical injury and some illnesses. His father only allowed him to move around metal and didn't teach him on how to actually make metal weapons or tools, resulting in a shouting match one day and Wally running away for a few days. When he cooled down, he apologized to his father and the two made up with a hug, which was soured when Wally felt a burning sensation on his leg and his father realized the sword he was working on was still in his grasp and accidentally branded his son. Wally had to endure his mother shouting at his father for an hour straight after that.

At eight months, a small pack of coyotes desperate for food came into the area and tried to raid Wally's pack. Wally was apart of a group meant to flank the coyotes and stumbled onto a group of five of them alone, resulting in a scuffle that led to one of them lighting Wally's arm on fire. After he doused the flame in a creek, the coyotes attacked again but were attacked from behind by his brother. Because of that, Wally tried to view his brother in a more positive light and to mend their relationship, eventually leading to the two looking through human ruins together.

At ten months, a traveler showed up and offered some human artifacts in exchange for items of similar value and was turned down by the pack leader. Wally was away when this happened and when he returned, he heard about the traveler. Intrigued, Wally acquired some of the more interesting artifacts at home to trade and left alone, only to find the traveler long gone. While walking back, Wally stepped on a weak part of a decaying bridge and crashed into the river below. When he came to, he found himself downriver and tried to retrace the river's path but chose the wrong river to follow. He eventually mistook a landmark and moved east and eventually realized he was too lost to be able to find his pack. He eventually decided to continue and see where it went, deciding to settle when he found a pack he could help out with.

During this trek, he met several individuals and was usually ran out of territories for accidental trespassing. One event of interest was him accidentally releasing a trapped coyote in a pack of crazed dogs, leading to him being tied to another pair of coyotes and the trio being hunted by said pack. They made an uneasy alliance that resulted in them dispatching the leader and escape the remaining members. Afterwards, the three parted ways. A month later, and twelve months since he was born, he stumbled into eastern Canada.