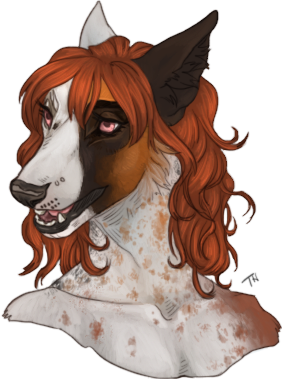 Twila del Morte is the only surviving daughter of Julia and Mendicant Silas del Morte. Her conception was forbidden under Salsolan Law, as servants are not allowed to reproduce—especially not with a ranking member. She had two siblings, Maggie and Abernathy.

Shortly after her birth, the litter was discovered by Calla Valentine, of who's control Julia lived under. Fearing for the pups' lives, she incapacitated Calla and ran off to meet with Silas. Due to unfortunate timing, only Twila was able to be hidden by her father before Calla caught up with her. Silas was forced to watch as Julia was beaten and their other children were taken away. Ultimately, they were killed, and while they grieved, Silas hatched a plan to ensure Twila's safety.

He took the pup to the kingdom's borders, where he concealed her scent before seeking an audience with Elphaba Revlis. The servant passed the child off as an orphaned foundling, and surprisingly, his lies went undetected. Twila was allowed to stay and grow up as a Salsolan, raised by the nursing Julia.

She was given the name del Morte in honor of the man that rescued her, the crown unaware that he was actually her father.

Twila currently resides in Salsola Proper as a member of The Family. She has a deep-seated resentment towards her status as a lowborn, perceiving herself as a nobody and is all too aware of the stain upon her name. Despite this, she has grand ambitions for her future and a will to see them through no matter the cost.

Outside of Salsola, she goes by the name Isla Morgan, the youngest daughter of a sea captain and his merchant wife.