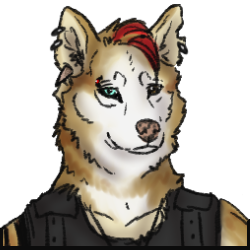 Theodore, who insists on going by Theo, has the heart of a rebel and and artist. As a very young man he traveled along side Josephine making ends meet through his passion of tattoo and piercing. He is a hard egg to crack, fancying himself a loner at heart. He doesn't share very freely, and holds his past close to his heart. This dogwolf considers Josie to be family and respects her above all else. Around her, this young man can be seen smiling and pulling out all of his good manners, perhaps there is a courteous knight inside this tough-guy artist?

Theodore's history is a bit of a mystery (up to player), all the Cavaliers know is that he met up with and traveled with Josephine LaBelle, who took on a mothering role in his life after he ran away from home, before coming to Casa. Originally they butted heads, but eager to take the grumpy young man under her wing, Josephine eventually won him over over a few days of home-cooked meals. Together they continued to travel through Canada, until, one day, a group of loners in Halifax picked a fight with them. Josie was taken captive while protecting Theo. With the help of the Cavaliers, Theodore came to her rescue and brought her back to Casa di Cavalieri.

After a few nights rest in the pack lands, the pair decided to stay and help the Cavaliers deal with the Syndicate Revenge Conflict. Once the final battle was done, they decided it was best to stay where they were safe. Within Casa, Theodore is working towards becoming a Guard, but also has a quiet passion for dyes, piercings, and art.

Theodore, when not being carefully minded by Josie, can be quite an arrogant and over confidant character. He has no issues speaking what is on his mind to others, and can be quite judgmental. However, if someone he deeply respects is near, he turns into an eager and sweet man who wants nothing more than praise. He is a punk rocker who pretends to not have a care in the world, but he is a little squeamish and soft on the inside.

None, can be discussed.

Josephine LaBelle: Josie; travel companion and mother-like friend; he came to rescue her when she was kidnapped by the Syndicate.

He is familiar with most of Casa, and works closely with Howland Reeves.

Some of the Cavaliers think he is a bit of a jerk.