Sinner is the daughter of Shaamah, and played a major role in the Familia Sugit Conflict. She was killed by her own father in January 2017. 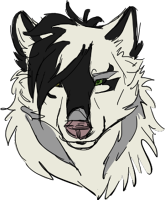 Sinner is large for a Luperci, taking after her father in size. Her coloration, however, is far from it. The white of her pelt is only the slightest of ivory hue, and silver and black markings are on the features of her face. Two wing-like markings spread across her back, from her shoulder to her waist, ending at the small of her back. A faux-hawk crops up from the back of her head and to the for, laid to one side, shielding her golden eye though not covering it to a point where she can't see; Her other eyes is green. A V shaped black marking is on her chest, and her hands, toes and tail are all marking in black. Nightmares plague her features with tired eyes, and she doesn't generally smile.

Sinner tries to put on a tough exterior, the moment someone meets her they know it's just a layer over her true self. She is a kind, compassionate, woman that might be a little timid at times. When in combat, her timid natures explodes into confidence over her body. She takes well to instruction, but isn't so quick to trust others. There seems to be a little about her that she isn't willing to explain.

Sinner doesn't have any friends from traveling so far from the Orions, and doesn't figure that she'd meet any of them in Nova Scotia. She doesn't make friends easily and fissures bonds before they can start.

After having been abandoned by her father, or as she says it happened, Sinner moved on to be more of a loner than anything else. On her travels she meets a man that she discovers is her grandfather and through him she discovers that her father is in Nova Scotia. Her grandfather, Ohja, and her father, Shaamah, are all she knows are left of her family.

Sinner was born to Shaamah and Natcha? in a loveless mateship for the sole purpose of breeding stronger pack members, however, she never did fit the bill. When a teen, she and her friend Takoda, pulled a prank on her unforgiving and violent father. The man chased them from the pack with death in his eyes, but to their luck they escaped to a neighboring pack where they were politically immune.

Even though her life wasn't threatened anymore, nightmares plagued her sleep. She needed to get away, but with war so heavy in the land, escape wasn't easy. Word came that her father's pack had been slaughtered by their enemies, and as their numbers fled into the night, she made her escape. She lived most of her years in North America, before meeting a man in the outpost who spoke of Nova Scotia so highly. It didn't take long for that man to figure out that her father was the old Grey Paw Lord, and revealed himself to be her Grandfather. Ohja, was the man's name, and he put it into her head that the nightmares would never stop until she confronted her father. Who, conveniently, lived in Nova Scotia. He offered to travel with her, and train her, in case her confrontation went south.

With her training, her confidence was growing and the nightmares seemed less daunting. She was beginning to forget how big, how malevolent, and how merciless her father truly was. As they arrive in the neutral lands of Nova Scotia, they find Shaamah's pack, but Ohja tells her to hold back. They need a better point of rendezvous. Krokar, seemed just that.