Shale (once known as Slave) is a Mackenzie Valley Wolf formerly of the Krokar pack. A gruff loner with a hard life behind her, Shale was born and raised a slave, only to escape and find her way to Nova Scotia. Though she spent some time in the pack life, and found herself comfortable there, Shale found herself eventually wandering to places unknown. Now older, wiser and more patient than cold, she has thrown away her old name and chosen a new one and a new path.

Slave was played by Ash for the first 75 IC posts of her existence. She was then put up for adoption, and picked up by Dale as a secondary character on 19/02/2019. All words in italics were originally written by Ash.

Slave was exactly that as a pup, and it was the only name she can remember ever being called by. Her left front arm was cut off after she attempted to escape her masters at a very young age. She was trained by the slavers to be a tracker, and she has some knowledge of plant life (enough to know which are good for healing minor wounds). Slave mostly lived in Idaho until a group of raiders killed the slavers she was under, she ran as fast and far as she could.

Slave made a small living selling her talent as a tracker, never staying in one place for very long, in fear that her old masters would find her again. Her wandering got her to Canada. In the later summer of 2016, Slave found a home with the fishermen of Krokar. Her great fear of water made for an awkward co-existence. Nonetheless, she found acceptance and camaraderie, and learned new skills and knowledge. For more than a year, she was content with being a part of this new family, opening up and trusting them more and more. With their patience and willingness to teach her, her confidence grew steadily.

One day, she disappeared from it all. The peak she had reached in enjoying the company of others was at an end; she felt out of place. All these smiling and content faces, and none willing to leave this little patch of shore. It made her feel stifled. Slave retreated from the others, feeling more and more the urge to move on. Around a year after she'd joined them, the Greenhorn left for the wilds with little warning or mention. Her wanderings took her north, out toward barren tundra and sparse northern forests. Odd jobs and charity kept her going, and she went as far north as the wilderness of former Labrador. Spending a little over a year on the Arctic's edge, she found a fishing community, and, with what skills she learned from the Krokarians, integrated herself. It was here she began to recover from past trauma, and finally learned how to swim and keep afloat in water. Her new name, Shale, also came from here after an old wolf showed her a piece of shale with preserved shells and sea life inside of it.

Despite the camaraderie and familial comfort she'd found, pack life once again wore on Shale. Unable to imagine herself living out her days among others, Slave took a dugout and portaged back down to 'Souls. Boats, swimming and water travel was something she'd grown fond of, and she alternated between canoeing along the coast and paddling along the north's boreal rivers. She planned to return to the Northern Tides and seek out Krokar again, finding she was missing the pack she'd left behind. Unfortunately, word of the pack's destruction soon came to her, and Shale felt enormous guilt for abandoning her family and not being there to help them. Eventually gathering the courage to return to what remained of her former pack, Shale decided to remain there and watch over the old territory, fixing up the Tuktu Lodge and establishing trade with nearby packs and passers-by.

Shale is a rather serious character, who takes everything as it is. She doesn't speak unless she deems it necessary, or is on a job. She will normally not lie, unless she thinks you can't handle or understand the truth. It is hard to anger her, but if you do you are likely to be attacked. She has changed considerably since her time in Krokar - for one, she no longer fears water as intensely as she used to. She has come to enjoy swimming, diving and harvesting from the shore, and considers this change one of many turning points. Conquering her fear of water opened her eyes to possibility, and with it, the idea that she was more than just a slave.

Despite this boost in confidence, she's as twitchy as she was in the days of Krokar. She reacts quickly to strange scents, sights and sounds, sharply in tune with her five senses. It's hard for her to drift off or daydream if she's uncomfortable. Any social awkwardness from before has bettered, but she's uncomfortable and submissive in the presence of others.

Shale suffers from survivor's guilt an (WIP, will be cleaned and edited as I go through her history again. - Dale)d some anxiety, born from the worry over and news of Krokar's destruction. Several avoidant behaviors have begun to appear in her, such as hiding away inside for long periods of time, or repeating menial tasks over and over to avoid certain triggers. She finds it hard to settle in one spot, seized by the thought that something terrible will happen with or without her knowledge. Shale finds great comfort in the ebb and flow of the waterways, and being near them and traveling along them takes her mind off her troubles.

Shale has no family to speak of, though she speaks of Krokar as one since lost. Her mother was a nondescript servant, and her father could've been any of the males either serving or of the slavers. Though wolves are social creatures, Shale finds comfort in solitude. Finding a mate isn't a concern to her, especially as she's grown old and past her whelping prime.

Palette and Other Traits

Shale's fur is a solid black (Cod Gray #0C0C0C), lacking any sort of marking. It is criss-crossed and marred by several large scars, revealing gray skin underneath (Tundora #4D4D4D). The most noticeable of these is one arm completely removed to below the shoulder; the S-shaped slave brand on her remaining elbow; a pair of bite marks, one on her lower back and one on her upper left thigh; two large, four-fingered claw marks, one on her right ankle and one across her chest; and a long, thin scar on her good arm's lower shoulder. Her eyes are striking against her coat, looking like two embers against her charcoal fur, the color more red than orange (Milano Red #C71804). Her nose and paws, where they are not chafed or scarred, are night-dark (Black #000000).

Shale's scent is typical for a she-wolf: musky, outdoors-touched, lightly holding a soft sweetness. What makes it stand out is that it's thoroughly soaked with the smell of the sea. Heavy with fish-odor and salt, touched with sand's dusty dryness and the petrichor of soaked, sun-bleached stones, it's obvious Shale spends her time near saltwater. The times she moves far enough from the coast or an island, she'd stick out like a sore thumb among more forested, drier areas.

Shale's missing arm aches from time to time, especially during bad weather and pressure changes. She's more talkative and open to people in these times, feeling vulnerable from the old ache. It's something she can't explain, only follow until she feels better and more independent again. She's also begun to lose her sense of smell, but the effect isn't yet pronounced enough for Shale to be aware of this.

She can normally be seen wearing a light leather coat, unless she deems it too warm. During her travels, she traded for repairs and upgrades to her coat, giving it a hood, a shawl-like flapped collar for extra warmth and neck protection, and four inner pockets. It was originally made out of deerskin leather, but has been repaired with moose and caribou leather, and hemmed with pale, oblong wooden beads. Five large buttons made of horn bring it together to keep out the cold. She usually carries a dagger with her, in case she needs to fight in defense of herself or kill prey - this is kept in a leather sheath attached to a simple, horse leather belt, which goes around outside her coat. When she needs to put her coat or other things away, she does so by tucking it away in a bag she carries with her for such a occasion. Most of the time she carries it, but she affixes it across her chest and shoulders in her quadruped forms. She often stows in this bone needles, some horsehair thread, and whatever plants she's gathered or is carrying that day.

To get around the waterways she frequents, Shale will create simple rafts of logs and branches. She uses a long wooden pole to steer these crafts, which are often temporary and disassembled after use. These rafts are limited to shallow and calm waters - if necessary, Shale will shift to Secui to swim. 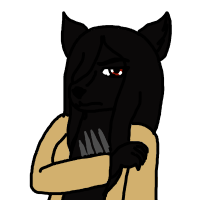 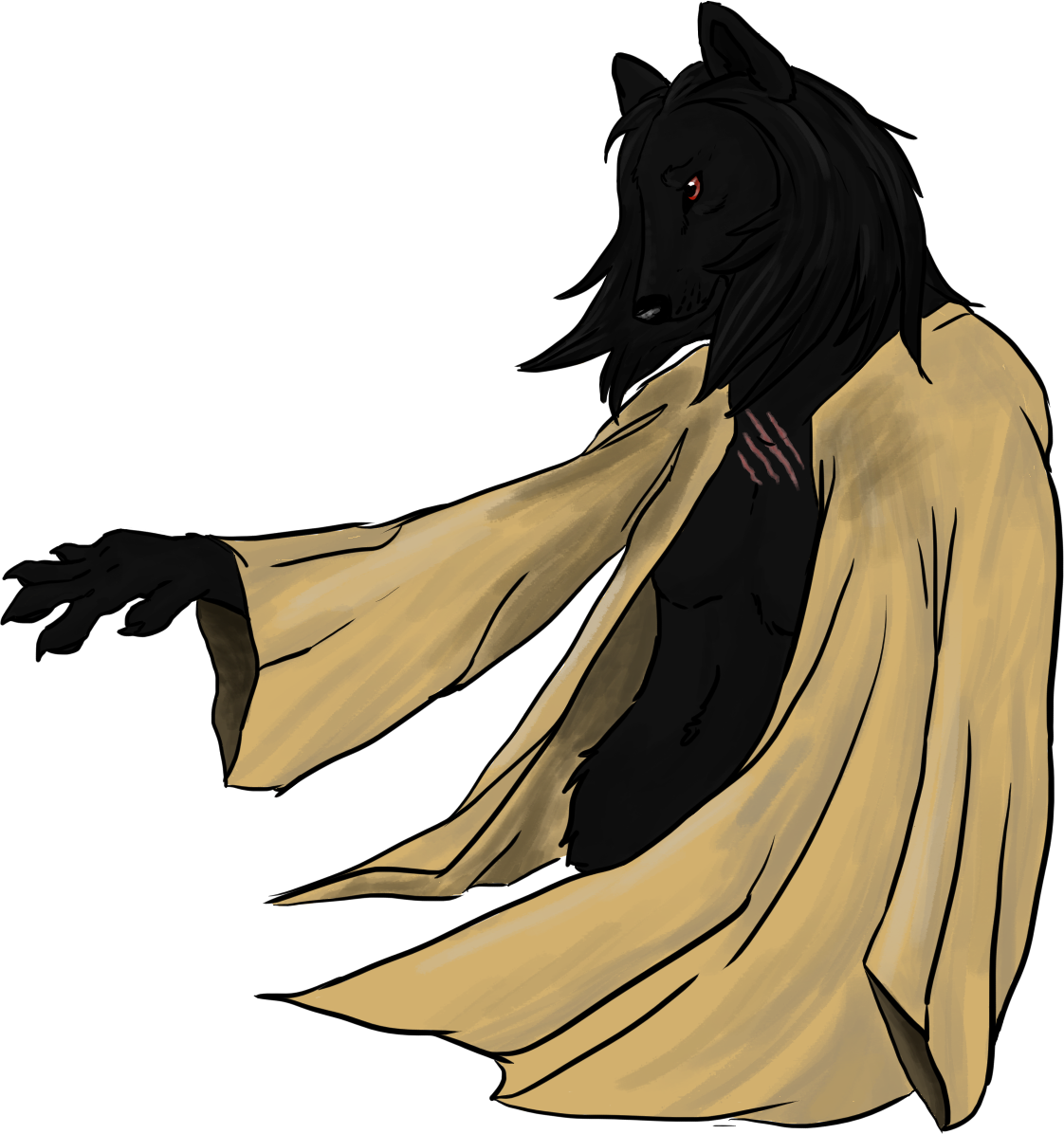