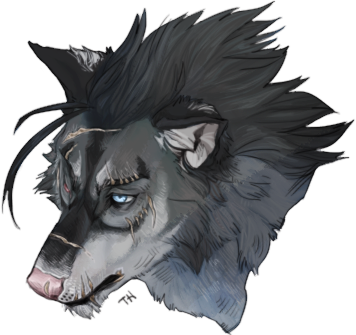 Shaamah came to Nova Scotia seeking purpose after defecting from the Gray Paw Pack and his war-torn birth marsh. Bartering a deal with a man who patched up an arrow wound, he then joined Sapient.

He was a member of Sapient, ranked Primor Indicium, holding of the Mercenry metier, working toward a Saltier metier, and had an AOS in Combatology (The study of combat and strategy). At their disbandment, Shaamah continued to be a Mercenary in Amherst for hire, no longer offering discounts to those of Sapient or it's previous allies.

This lifestyle was not ideal and Helena Troy Lykoi offered Shaamah sponsorship into Salsola. Here, Shaamah forced Zetsubou, his son, into indentured servitude with no foreseeable release. Within Salsola, Shaamah last held the rank of Henchman. He was seeking to make his way into the Shield tier, before completely defecting after being injured in unrelated combat. His foul deeds done to family had caught up with him when Zetsubou, Hibiki, Dusk Hushhowl and Jacelyn Wolf-Denhalii sought their revenge.

Having escaped with barely his life, he now remains a loner and resides with Lucia Amarok.

Before his wound, the soldier had a heterochromic gaze. His right eye was once a fiery gold but is now a void, and his left, a chilling blue. His body is adorned with scars from all types of warfare, though what is left of his monochromatic pelt is thick and plush, if not coarse with age. His nose and pads are a pastel pink, and the healed tone of his scarred skin is an Akaroa. His undertones are a silver, gradually rising and darkening into Mineshaft primal stripe that runs from his hackles and down his spine, to the end of his tail. Paws follow suit with the dark color, tall gauntlets on forelegs and up to the ankle on his hind legs; Elbows reside in the same color. One silver spot adorns each leg, the two on the front are at the wrist, and the two at hind are on the foot between the ankle and the toes. A dark stripe runs from his crown to his nose, reaching out beneath his eyes almost like wings. His eye sockets are a darker gray and a dove gray holds most of his mane and body coloring, alongside a 'v' shaped marking upon his chest. Shaamah's build is a hulking, thick with muscle and broad in the chest, neck, forelegs, and hips. There is very little fat on him, and due to his wary nature, he's often dehydrated, leaving his skin taught and his muscles revealed in his optime form. The graying and wrinkling of age is quickly taking over his features. 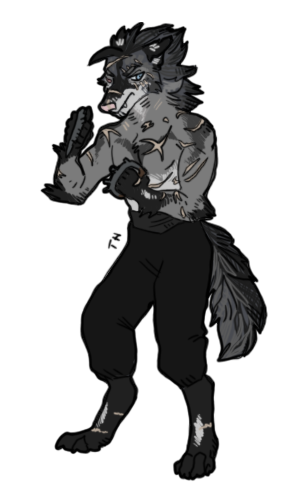 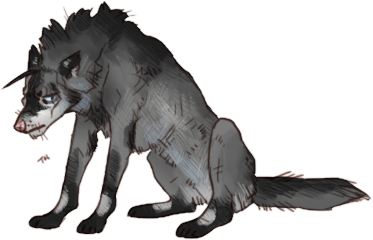 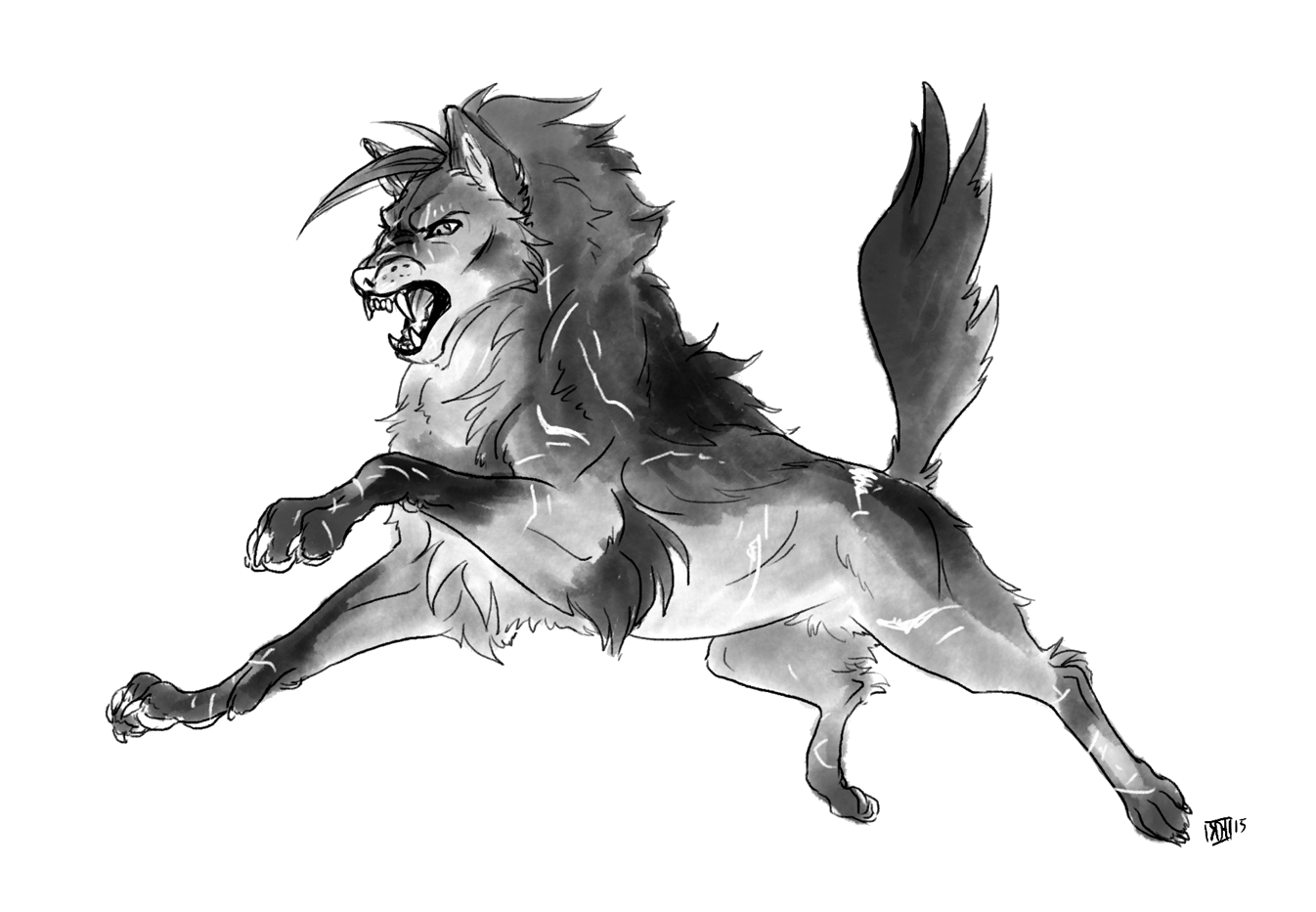 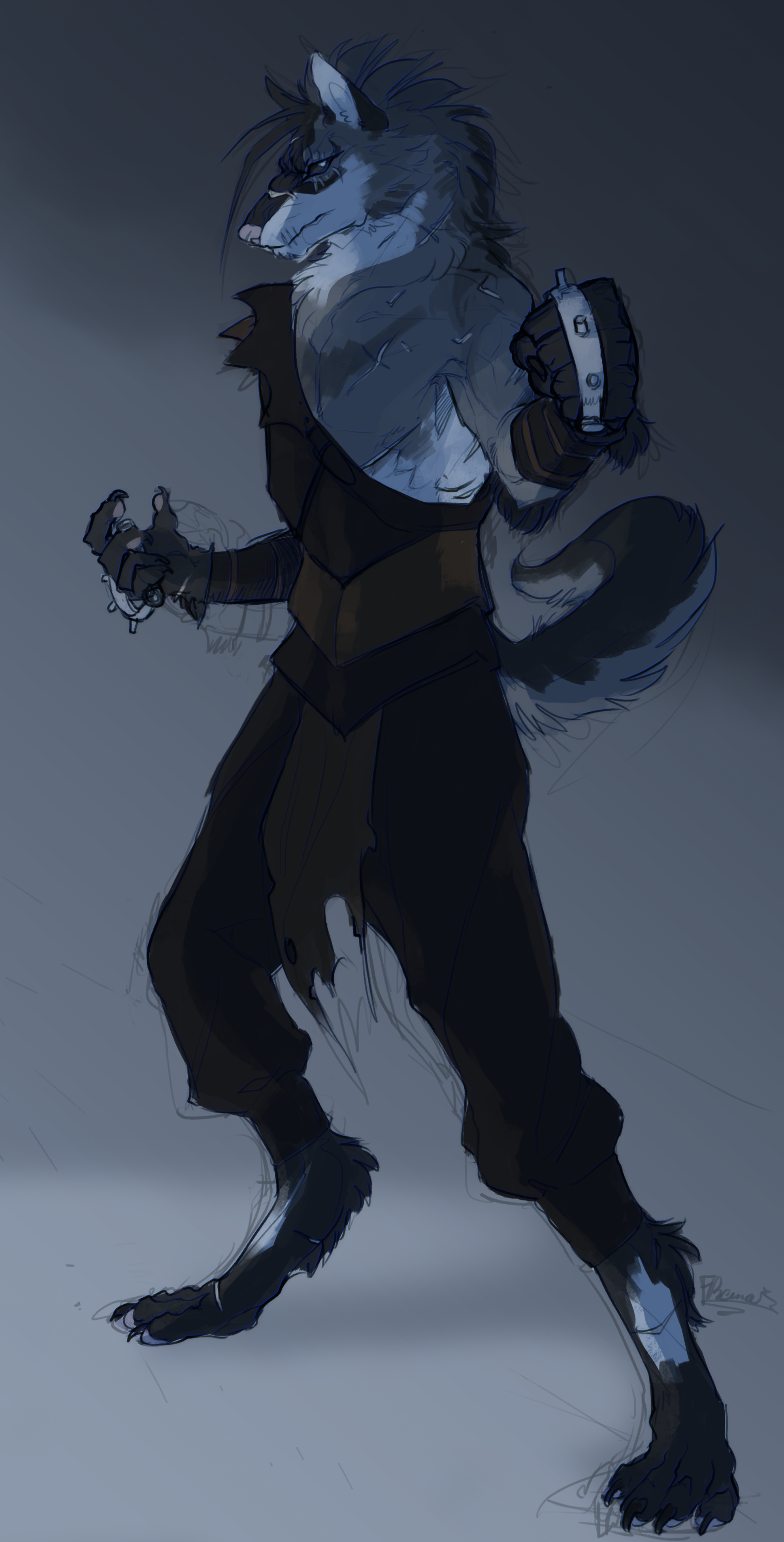 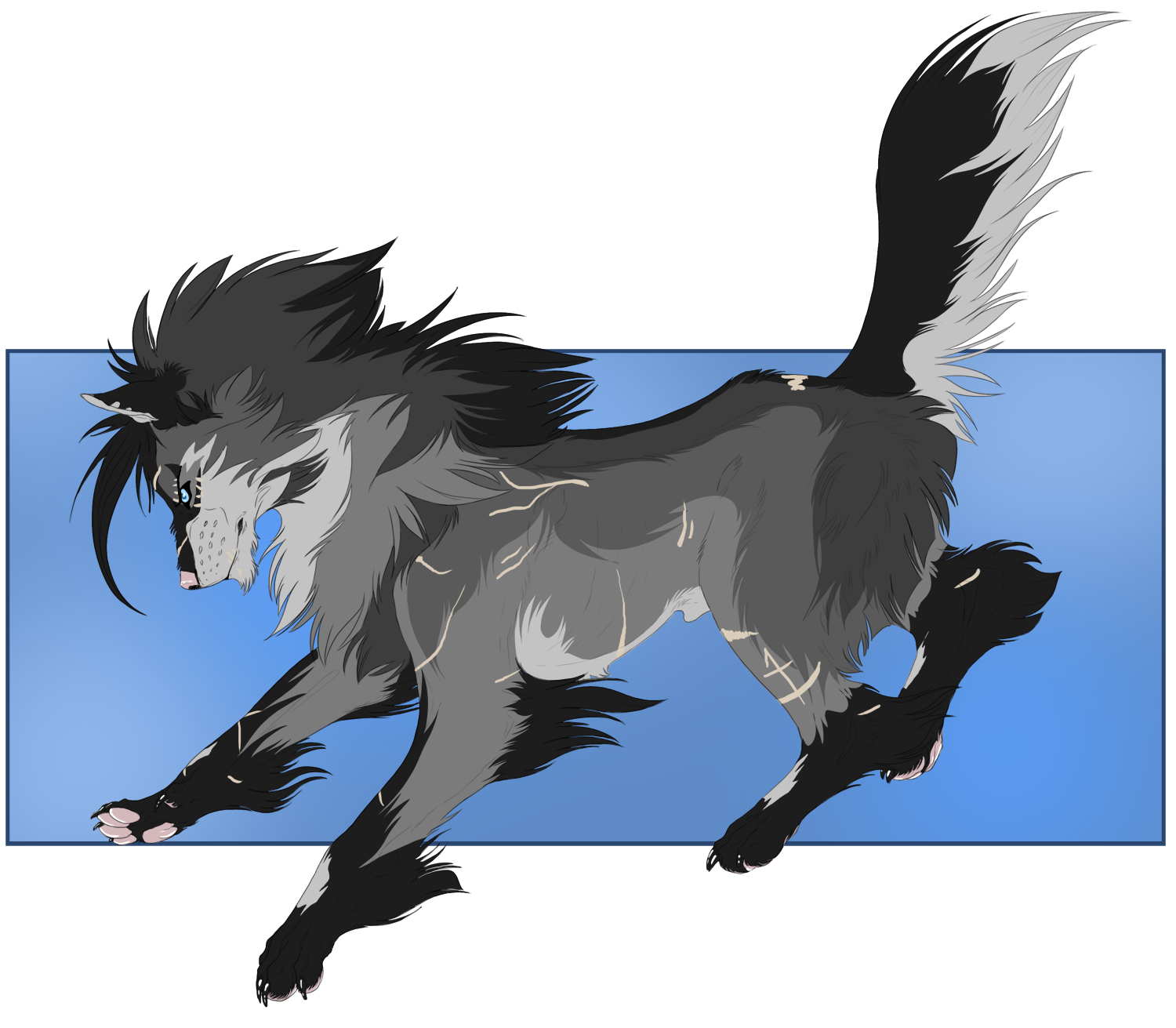 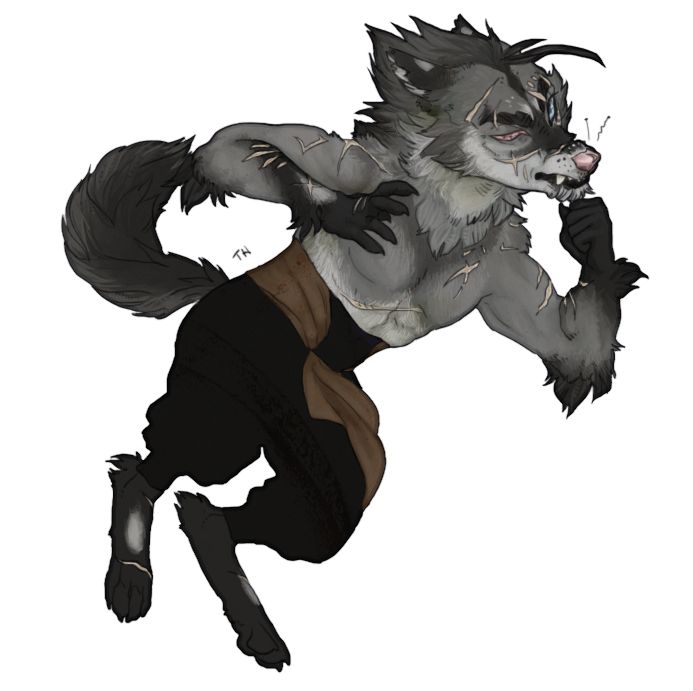 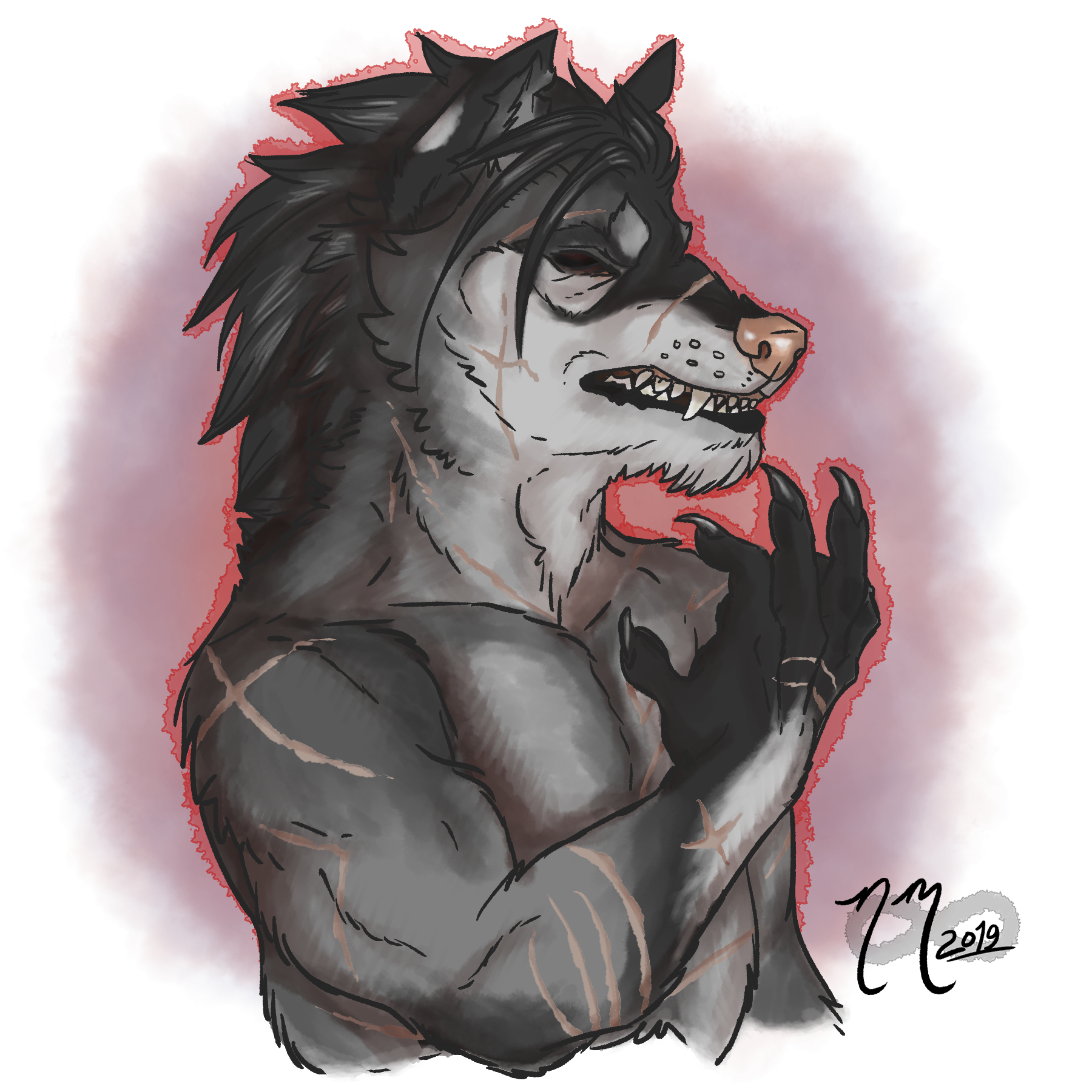 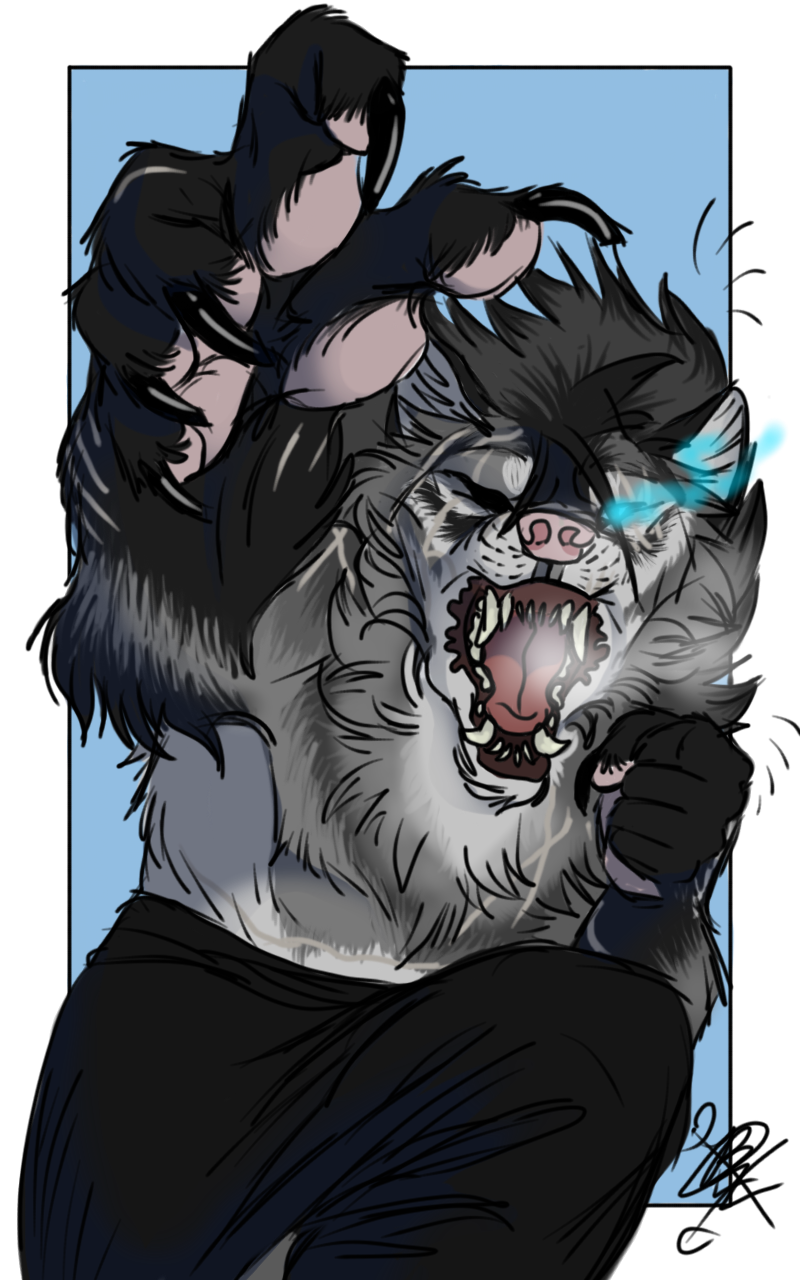 After escaping what was a justifiable and deserved death, he now resides with the carefree and pleasant Lucia Amarok. Through her, he is relearning old temperance, patience, and has abandoned all previous engagements, packs and people. Having disappeared from the face of the earth without a word, he accepts that his death is open ended, but can be assumed. Aggressive and violent ways do not tempt him now as much as they did before, though he can be abrasive. The PTSD and Sociopathy he suffers may still resurface from time to time. He no longer has a desire to rise in rank or lead and has settled internally as much as he has externally. Months of healing has allowed him mental recoup time, as well, though he'll never be back to full operation. He can be grouchy at times, is a little slower physically, but still has tension around his edges that seems to be more muscle memory than intention.