Scorpius D'Angelo was a member of Salsola and for a time was The Jagermeister. As the lead hunter and a Cazador in the pack, he served primarily as a hunter and trapper, killing or capturing prey both large and small. Though not officially a healer he did what he could to help those in need but functioned moreso as the pack's Veleno, well known for his highly complex and incredibly potent poisons.

He was the only son of Naniko D'Angelo and Ravesque Acidic, born in Fascinium, a cult pack somewhere in New Brunswick, Canada. In his youth he was among the founding members of Anathema and a member there for a while before both he and his mother disappeared. He spent some time traveling the wilds of western Canada and the northern United States before returning to Nova Scotia matured and hardened from his journey.

Scorpius ventured home to find his old pack had become what he considered a pale imitation of what it once was and turned away from it, joining the secretive Salsola in January 2014 instead. Under the tutelage of the pack's Lord Commander at the time he rose up the ranks and made a name for himself, though at the same time became quite reclusive, keeping to himself. In the spring of 2015 he adopted a baby bear orphaned by the immense flooding and raised it as a companion.

Later that year dead bodies started showing up on the borders of Salsola but it wasn't until after the fall of the Red Star in April 2016 that The Five finally made themselves known. Through the exhaustive efforts of Scorpius and others The Five were eventually brought to justice. However, when winter came so too did more misfortune and a sudden attack on a group of Salsolans returning from the pack's Portland Outpost began the Second Boreas Conflict which Salsola and Inferni banded together to resolve.

All the while Scorpius had been courting a kindly female who - after almost losing her life to a mysterious illness in the spring of 2017 - eventually became his mate. It was not long after that when winter began creeping in once more that several events eventually resulted in a terrible war with the once allied Inferni. It was not until the end of war that Scorpius found out he had become a father to "twins" Sidious Eternity and Senua D'Angelo.

Urged by his mate to seek out an easier and safer life away from the pressures of rank and the dangers of enemies on all sides, Scorpius moved his family to Salsola's Fort Preble Outpost in Portland where he settled into retirement as his age caught up to him. It was one fateful evening late in the winter of 2019 that Scorpius departed on a hunting trip alone and never returned. It was not until the next day that Sidious tracked him down and found his secui form lying lifeless in the snow, a large deer dead beneath his great weight. No one knows for sure what happened but his heart had given out in heat of the hunt and he died painlessly doing what he loved. 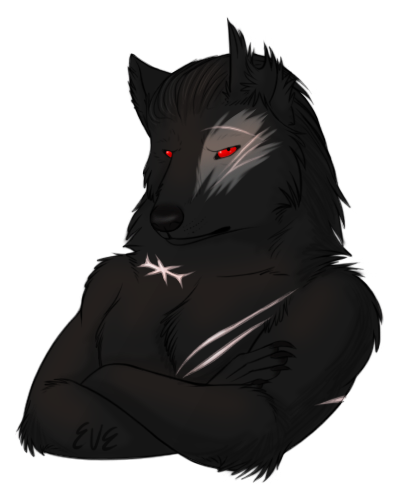 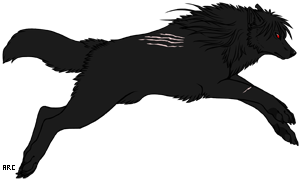 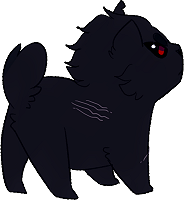 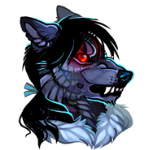 Scorpius was born to Naniko D'Angelo and Ravesque Acidic and was among the founding members of Anathema where he grew up and spent much of his early life. When his mother disappeared, he did as well, entering a self-imposed exile for over a year until he decided to return to the packlands one day, mainly because he missed his family and being around other luperci but also because his only friend had vanished suddenly. He turned his back on Anathema after hearing that the pack had erected a wall to keep out its enemies rather than fight them and wandered around a bit before joining Salsola. He then rose through the ranks to become The Jagermeister, gained a mate, and had offspring. Not long after he moved his family to the pack's Fort Preble Outpost in Portland, he had another litter with his mate before passing away from heart failure on a hunting trip.

Scorpius D'Angelo was born as the solitary offspring of Naniko D'Angelo and Ravesque Acidic in Fascinium, a cult pack somewhere in New Brunswick, Canada. They did not live there long before Naniko decided to return to Nova Scotia where she formed the pack Anathema with several other members of the family. There Scorpius lived a relatively normal young life, growing, learning, and making friends outside of his family. That is, until an unfortunate "accident" occurred in which his half-brother Harlowe pushed him into a fire, severely burning the left side of his face. Badly disfigured, the young male was convinced that he was a freak who would never live a normal life again. Within the pack however, he was treated the same as always and continued to live a reasonably normal life. He took a liking to a young female named Melee Soul, who he pursued even after she disappeared out of his life. Eventually, after giving up chase, she faded from his mind and soon his memories.

After some time Naniko decided to step down from her position as leader of Anathema and left the pack with Scorpius in tow. Where she went, he did not follow completely, and decided to roam the packlands on his own, hoping to find a place where he would be accepted as who he was and not what he was supposed to be. As his mother's first born male when the pack was founded, Scorpius was expected to inherit leadership of Anathema once he came of age. Although he had the makings of greatness within him, his accident had rattled his spirit, and the young male felt himself unfit for the burdens of leadership. Outside of the pack, and on his own, Scorpius was treated like the freak he believed himself to be. Although he had a mask to cover the tarnished half of his face, still the odd looks came to him from strangers. Feeling as though he would never fit in among the canines of Nova Scotia, Scorpius quietly disappeared into obscurity, seemingly never to be heard from again.

Leaving the packlands, Scorpius set out on a long journey as a means of self discovery, to find himself, his purpose in life, and to put his past behind him. Instead, the warm heart of the kind young male he once was slowly froze as apathy and indifference hardened him into a stern and abrasive adult. Although he learned to let go of his self esteem issues and no longer cared what others thought of him, at the same time he grew a general distrust of others, seeing very little goodness and beneficence in the world around him. His travels took him out into the western wilds of Canada where he spent his life as a drifter, entirely alone with the exception of his horse Midnight, who followed him in his exodus from Nova Scotia. His talent for starting and tending fire proved to be a priceless skill when winter stuck, the snow fell, and temperatures plummeted around him. When faced with illness, his mother's teachings on healing herbs and remedies also proved invaluable on his journey. Through experimentation and his own ingenuity he taught himself about the more sinister side of working with plants, proving to be a natural at creating toxins and poisons. He even went as far as gathering dangerous animals and insects to harvest their venom and tinker with it, testing all of his concoctions on small prey animals which he would then sacrifice to the Khalif god Tak, burning them once their life drained away.

The only constant in his self-imposed isolation was his contact with a wandering trader named Apollinare, who often exchanged various goods with him whenever the two males crossed paths, rare as it was. The older wolf was kind and patient with a very leery Scorpius, teaching him Italian when he was around and lending him a book on the language whenever he wasn't. Every time Apollinare reappeared in his life, he would test him to see how well he was learning the new tongue, and each time Scorpius made progress until he became fluent in the language. His cagey trust in the older male eventually grew into a friendship, the two swapping stories and exchanging goods whenever they came across one another in their travels. It was through this friendship that he acquired his whetstone, knives, and the know-how to maintain them free of charge, though his skills in trapping and skinning were learned on his own. Then, out of the blue, Apollinare disappeared. He took some time to search for him on what he knew to be his regular trade routes but never found the wolf again. He suspects the older male is dead, murdered by bandits or felled by some large predator, but he will never know for sure.

Scorpius became much more introverted and withdrawn after that, his distrust in others growing much worse than before. Plunged back into solitude, he had forgotten just how lonely such a life was, and the more time he spent by himself the more a yearning for companionship began to grow within him. He found his thoughts constantly turning to his family, friends, and everyone he left behind in the packlands. With all the good memories that surfaced though, so too did the bad, reminding him why he left them all behind in the first place. He had become an innate survivor and was doing well on his own, but the more time he spent wandering with only his horse as company, the more he longed to have a permanent roof over his head and a family to love him again. Though sure of himself, he was still hesitant at first. Having lived for so long on his own, he had become maladjusted to socializing and interacting with others. Not about to let his fears conquer him again, however, he turned his ruby red gaze upon the east and began his long trek back to the lands of his youth.