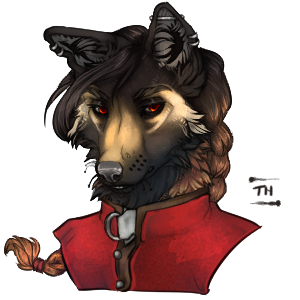 Rumpa Nightshade is the son of Raine Nightshade and Elva Kai. He was born alongside sister, Mercy Nightshade.

His life was tumultuous from conception. The product of a non-consensual encounter, Maelyx Nocturne had to remove Mercy and Rumpa from Elva upon their birth to save them from her. They were raised alongside her children until Maelyx found their father, Raine, who was at the time a respected member of Casa di Cavalieri. They were taken in by their father until he was executed for crimes against the pack including the molestation and attack of Arlen Stryder and the kidnapping of Myra Garcia.

The Nightshade twins were taken in by the pack's cleric Veri Secanti and raised with her son, Alaric Ivanov. Both children were conflicted by their father's death and acted out against the pack. They caused general non-harmful chaos, but in the wake of their father's crimes, this did nothing to ease their treatment in the pack. Arlen Stryder, particularly, took offense to their presence and bullied them as they grew up.

Rumpa was apprenticed to pack scholar, Everett Ames and the boy finally had someone to look up to. In his scholarly pursuits, Rumpa discovered Christianity and turned away from delinquency. He became fast friends with Nora Knight and Nayavota Denahlii who were of a similar age. He also discovered a talent for tailoring and became fascinated with life in Cour des Miracles. At the time of his First Blood Ceremony, Rumpa and Mercy both failed as a result of their lackluster attitude towards combat and pack culture in general and were placed as Recruits.

Shortly after their failed First Blood Ceremony, Rumpa turned towards the allied Court for solace and found himself increasingly comfortable there. Just as he prepared to make the move over (cutting ties to his Cavalier friends), Cour des Miracles disbanded and Rumpa found himself at a loss.

It took a few months before Rumpa finally found his footing in the pack again with the help of Nora Knight. Rumpa took a vow of pacifism - refusing to take up combat even in self defense. This put him greatly at odds with the pack's culture but over time, many were accepting of it. He lived in the Courthouse for a time before Nora moved into a house and offered to let him move in with her. He accepted and then became a full-fledged tailor. Rumpa came out of his shell more and more, becoming more friendly with packmates such as Day Hushhowl.

In January of 2020, the 2020 Blizzard locked Nora and Rumpa in their shared home where they eventually admitted to their mutual feelings for one another and began their relationship. Conception of their first child shortly followed. On February 18th, long-time enemy and older brother of his new mate, Arlen Stryder discovered his sister's pregnancy and assaulted Rumpa out of ignorance. The tailor tried to make amends and explain that they were in love. Rumpa found Arlen near midnight of February 19 being attacked by a loner merchant Elias Einar. Rumpa stepped in to defend his packmate - breaking his vow and defending his own attacker. The morning of February 20, Rumpa passed away from his wounds.

Rumpa Nightshade is survived by his only living child, Bastian Nightshade who was born on March 11th, 2020.