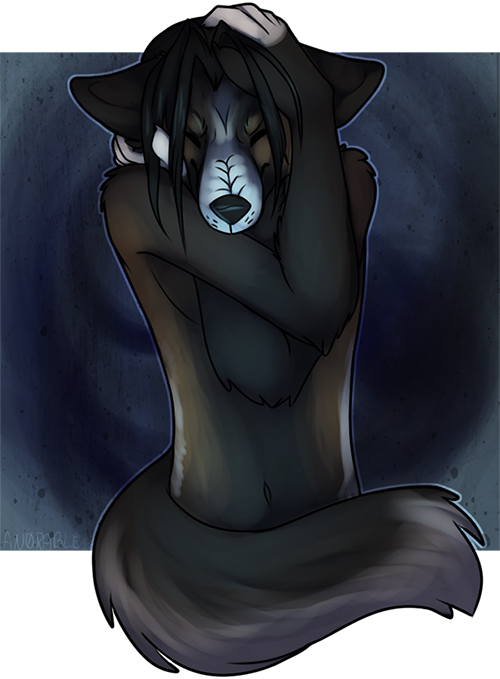 Raine Nightshade, father of Mercy Nightshade and Rumpa Nightshade, was a bad meanmean man who got himself ded by CdC. Personality Tropes: Bitch in Sheep’s Clothing, Villain with Good Publicity, I Have You Now My Pretty, Devil in Plain Sight

After three and a half years of practice, Raine Nightshade has learned to blend in to the crowd well and hide the darkness that truly lurks within. On the outside, he is affable, charming, kind, playful, and often even funny. And although often times while he is playing the part of pretty-boy good-guy he feels the emotions when he laughs and plays, this friendly personality is only there to hide what is truly beneath the surface. He loved to hunt at a young age, but was more of a ‘catch and release’ kind of cub. His father and brothers were hard on him for it, thinking he lacked the guts for the kill, but really he liked watching the terrified, injured creatures limp away. After he reached sexual maturity those desires became something more sinister altogether. He will revel in the kill, but prefers to let his victims live – at least for a time – after he is done with them.

That is only the deviant one would uncover beneath the surface, masked by the caring, loyal, upstanding individual he pretends to be. He knows the key to staying alive is to pretend to be this person, this good person, and to indulge in his deviations only far from whatever place he deems his faux home for now.

Raine was born one of a plentiful litter of three brothers and one sister. Five pups altogether, it was proof of the greatness of Raine’s parents and small commune that all the cubs lived. For the first few years of his life, Raine lived with his family in Southern California, in the ruins of San Diego. As any good little boy would, he loved his mother dearly, and envied his father for the man that he was. He was often teased by his three brothers for being the weakest, though he was not weak in body. From the time hunting lessons began, Raine learned to catch and release the majority of his prey. The first time he ever caught a rat in his jaws, he savored the coppery taste of its still-warm blood, the trembling of its body, its squeals of terror. That time, he killed and ate the rodent. But soon he learned to love a good game of cat-and-mouse, and releasing his prey to watch it scurry away terrified and hurt. Sometimes he would follow it and kill it later on, other times, he simply let it live with the trauma of what it had endured. Since he rarely proffered any creatures from his little cubbish hunts, he quickly earned himself the reputation of a poor hunter. His brothers teased him and his father shunned him, only his mother and sister continued to be sweet to young Raine.

As he grew older, and he and his littermates learned to shift and awkward adolescence was upon them, Raine began to notice not only his sister’s own lovely Optime curves, but that of the other women in the pack, too. He became inattentive to chores and duties he had as his mind would wander with fantasies of what he would do with them… to them. Of course, his sister Brita was the loveliest of all. She pitied him, and was nice to him, and just like the days of their childhood, they often slept in their den curled up together.

One day just past his second year of life, the rage that had slowly percolated inside of him came boiling over. Raiders had ransacked their homes, and the men banded together to protect what little they had. Raine had captured one of the marauders, but he had slipped free and escaped. His father, Obynas, began beating him for his failure, and Raine snapped and killed his father. After that, he hunted down two of his brothers and slaughtered them as well. He went to his mother and sister with a story that the raiders had killed their father and brothers, claiming the third brother who he could not find was also dead, and that they had to leave. They escaped together and took refuge in the ruins of an old zoo – that was when Raine locked his mother and sister in a cage.

He kept the women for several weeks, feeding and caring for them but deciding what his next move would be… all the while watching his sister closely. One day he entered his sister’s cell with a proposition. When she turned him down, he forced her to the ground and mounted her. Their mother attacked him then, leaping on his back to save her daughter, but her efforts were futile. Raine threw her off and made Brita watch as he slowly tortured and killed their mother. He kept his sister for several weeks after that, mounting her against her will and torturing her physically and emotionally. Slowly he molded her into the perfect, “willing” servant. Slave, more like. But when they left the zoo under pressures of their pursuing brother, she was the ideal, obedient vassal.