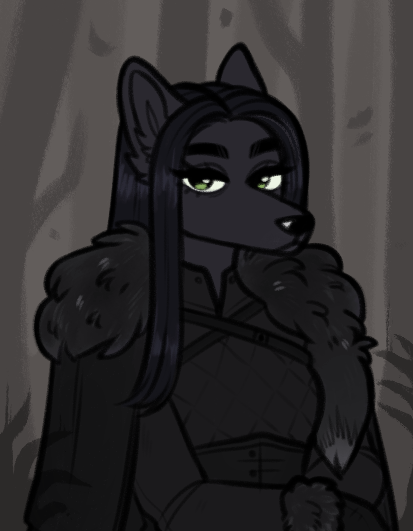 Plague D'Angelo is a Tradesman of Salsola and the result of an incestuous, political mateship between Anguish and Prophet D'Angelo.

Born the disfigured runt in a litter of six, she struggled against cruelty from the moment she drew her first breath. Her father, disgusted by her polymelia, made an attempt on her life soon after her birth. Fortunately, her grandmother, Misery, saved her life that night and cut from Plague her deformity.

As she aged, Plague was alone more often than not, forced to live in the shadows of her more prominent siblings. She found comfort as a priestess of Tak, becoming so fervid in her faith that she was generally regarded with odd looks and rumors of declining sanity. This was only exacerbated by the long-term abuse she suffered at the hands of her uncle Wrath.

In the later months of 2015, She was sent away to follow her sister, Bane, to Nova Scotia. There, she joined the ranks of the Thistle Kingdom and became enveloped in its polytheistic Coven as her sister quickly climbed the hierarchy.

And though this change should have ushered in a new era of peace in her heart, cruelty followed her. She was attacked later that December by her younger sister Haunt, and secluded herself in her home for two months as a deep-seated paranoia rose to the surface of her fragile mind. Her lingering psychosis eventually worsened and she left for the Outpost soon after, where she began a slow recovery.

In 2017, Plague gave birth to her first litter following a courtship with Quicksilver Lykoi. They raised their children—Absolution D'Angelo, Solace D'Angelo, and Jubilee D'Angelo—at the outpost until the three of them decided to strike out on their own. Plague currently lives in Portland with her mate.