Petrichor is a furrier and cook from Canada with a porcupine companion that he can't get rid of (despite trying). Thank you, character generator, for that companion.

He hails from west of Souls, from a pack that is fairly humanized and specialized in a few trades. Unfortunately, his prickly nature caused a lot of trouble, and the last straw was when he yelled at a pack council member for what he saw as unfair treatment of his younger sister. The strongly suggested that he leave for a while, and implied that it would not be a good time for him if he stayed. He did so, setting off towards the east, intending on continuing until he found the ocean. by baying on dA 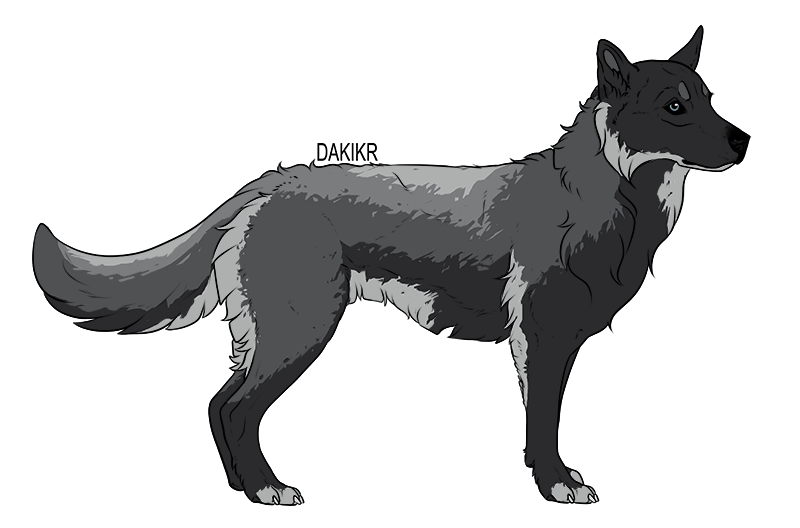 At first, Petrichor seems a quiet individual. He doesn't talk much. He frowns a lot. If pushed... he is mean. Being isolated for a while has affected his social abilities, leading to anxiety when around too many canines in an enclosed space. Anxiety leads to snappishness and to lashing out with harsher words in an attempt to get others to leave him alone.

Petrichor was raised without any particular religion, and his opinion of them is very low.

Petrichor and Battle began traveling together more purposely and became friends of sorts. Petrichor admires her confidence and her presence usually helps him feel less anxious because he can follow her lead. Their friendship was not always smooth, though; sometimes they argued and ended up at separate camps for the night, and sometimes even for several days at a time.

During the summer of 2021, Battle began telling him about a pack she had heard of from some other loners. It was called Casa di Cavalieri and he could tell that she was keen to join it. He was not so sure, given how his life in his previous pack went. It eventually became clear that she was going to join with or without him, so Petrichor decided to give it a shot.

Upon joining Casa di Cavalieri, Petrichor felt immediately out of place. It wasn't anything specific that any of the pack members did or didn't do; he just felt awkward around everyone. For a little while, he barely left the room that he and Battle shared. That didn't last long, though, because it made him feel guilty, so he was soon spending time in the woods hunting so that he felt like he was being productive.

That was fine, but soon Battle started getting after him to start making friends. He just didn't know how to do that. Still, she challenged him to talk to people, so that was what he set out to do. Eventually he would have to become comfortable with someone, right?