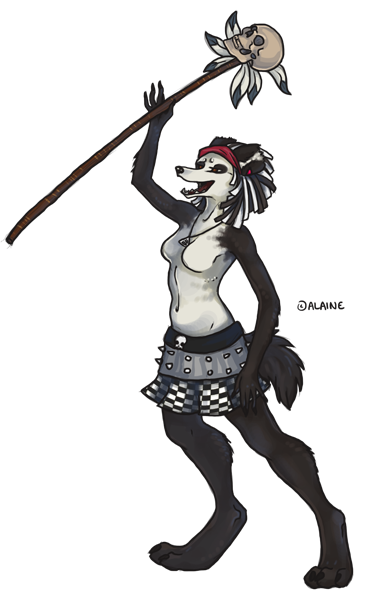 This page is still a very big Work In Progress. Please do not refer to this page for accuracy in Panda's History until after this message has been taken down.

Panda Behr was the daughter of Unknown Parents, in the muddy swamplands of Florida.

Panda was a longtime, high-ranking member of the now defunct pack, Anathema, her ending rank was of Malpas, in which she was the spiritual leader of the pack. She notably was mated to the Angela, Aeron Ganesa and their third female mate, Charm Sawtooth, along with being mated with Venom Trombetta, who sired the legitimate litters between the polygamous coupling. Their children together consisted of the following characters: Lillith Trombetta, Jakobii Alix Trombetta — to of whom she is the biological mother of — & she was step-mother to Isolde Sawtooth, Kentaro Lykoi, Toshiro Ganesa, Viper Arsenic Trombetta, & Pythius Absinthe Trombetta.

She had lived in Anathema, and served as a pack healer and witch for many years before she had been exhaulted and put at the head of the pack of misfits. When her son — and heir to the throne — Kentaro, overtook his mother's throne, she became unhappy and unknowingly had become involved in a coup d'tat that her twin sons, Viper & Pythius, had tried to put together, with no avail.

Panda still served her son for a bit of time before her and Venom suddenly disappeared from Anathema, along with their youngest child, Jakobii.

They fled to the South, where the winters were not as cold, and the wolves were not as brutal. In this new land that she had fled to, she had started a coven of her own, where she served as the High Priestess. Her reign was mostly peaceful, with only minor conflicts with neighboring packs. In one particular skirmish in 2017, Venom fell in battle, leaving Panda to lead this Coven alone for 3 long years.

Artwork of this character on this page is thanks to Nat, Nina, Sie, & Alaine! Jmonster created this design & is the sole owner of this design. This design may not be used without explicit permission. Images in gallery are by the respective artists that are labeled underneath them! Thank you to every single one of you for your contribution to bringing this character to life!