Notch was born to a large coyote clan whose ailing leadership quickly lost control. With all the fighting happening, Notch left as soon as he could and struck out learning to trade. He eventually met Auger de la Croix when Auger prevented him from getting robbed and the pair teamed up, sometimes joining other traveling groups for safety. They were founders of Del Cenere Gang and have lived there since. In 2021, he and Auger found an ailing coyote and her puppy on the pack's border. The mother soon died, and Auger and Notch chose to adopt the puppy, named Dynia.

Despite his fancy appearance with his hair done just so, Notch is no stranger to hard work. He pitches in whenever is needed, regardless of how dirty he may end up as a result. He is generally chatty and friendly, with a mischievous streak.

Notch currently lives in Del Cenere Gang with his mate, Auger, and their daughter, Dynia. He is ranked El Elegido. Lines by Gabrielle DeLyon on DA. Coloring by Rat.

Notch is outgoing and tactile with a flair for the dramatic. He likes pretty things that many would consider impractical. Despite his somewhat delicate appearance, Notch is willing to jump in and do any work that needs to get done.

The initial impression that someone might get from him is that he is happy and gregarious. On the inside, he is more tempered, often playing up the friendliness to help grease the wheels in trade and relationships with other pack members. While he is not necessarily false or fake, he is often a 'kill them with kindness' sort. Just because he is nice to someone doesn't mean he likes them; Notch simply thinks that being rude doesn't really help anyone.

Notch does have a temper, although it takes a while to trigger it. He is completely okay with Auger fighting his fights for him, partly because Auger is good at it.

Notch has no opinion on religion as long as followers don't use it as an excuse to bring harm to others.

Notch is a solid 6 on the Kinsey scale, and he especially likes traditionally masculine lovers who are larger than he is. Flex and he'll swoon.

Notch will try anything once, although he has not really enjoyed any of the highs he has gotten from drugs. He enjoys drinking alcohol, sometimes to excess. 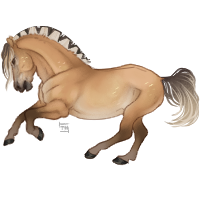 The family that Notch was born into were nomads who sometimes joined up with trade caravans and other times it was just his immediate family traveling. Sometimes they would stay in certain places for a few months before moving on, and other times they would decamp every day. Notch liked seeing all sorts of new places and meeting new canines. Well, the nice ones anyway. Once he could shift, he did whatever he could to trade for fancy things. They weren't practical, but he liked having jewelry and clothes. The clothes were sometimes difficult to come by, and he did his best to take care of what he did have.

At one point, some of his siblings decided they wanted to stay in a pack that they visited while they were out west somewhere. The group was much smaller and harder to defend this way, so they had to whittle down their supplies a bit. They joined up with another coyote family who traveled for trade. One of them had a horse that made Notch stop in his tracks. The pony's fur was cream colored, but his mane. His mane was two tone, a black stripe down the middle, and cut in a fancy way that showed it off. The pony was with a female coyote who seemed kind of sad, and Notch got to know her a bit. Apparently her great(-great-great-great)-aunt had died recently.

Eventually, the coyote suggested that Notch trade for the horse, Loom, since they seemed to have gotten attached to each other during the travels. Loom was a reminder of her great-aunt, and although she loved him, she had decided that it was time to let him go. They agreed on a trade and Loom became Notch's horse.

Notch soon split off from the rest of his family, wanting to check out an area that some of the others in the group were going to. They planned to meet up again later. A few days later, Notch got separated from the rest of the group during some bad weather. He eventually came across a small trading post where he could rest, but unfortunately, he had a fair amount of goods packed onto Loom's back. He didn't want to just dump the stuff, but he also knew that it made him a good target if someone was looking to steal from him.

Sure enough, a few canines did. He did his best to fight them off, but he was much smaller than them, and his scratching and biting at them got him nowhere. Then, he was saved by a very attractive (and very angry) dog mix. Like any self-respecting damsel in distress would, Notch promptly fainted. When he came to, he was disoriented and in pain, and the first thing he saw was someone stuffing his items into bags. It took a moment for his brain to catch up and in those couple of seconds, and he initially thought that his savior was trying to steal from him now. Wouldn't that be just his luck?

As it turned out, the male had decided that he was going to help Notch, who clearly couldn't take care of himself. It was high-handed, but Notch found that he didn't want to say no. He definitely didn't want to get attacked again. Notch joined up with the group that the male, Auger, was traveling with. They eventually met with Notch's family again, and then Notch continued traveling with Auger.

As nice as traveling was, Notch and Auger decided that they wanted to settle down, at least for a while. Having heard of some packs to the northwest of where they were, they decided to go there and see what they could find out. Things ended up not going so well, and they were bogged down in a swamp that they had no business trying to traverse. Another canine came along and helped them out, so they decided that they could stick with him and his group, which then called themselves the Drygrass Posse. It was an interesting couple of months, but Notch found himself growing attached to the group. Thankfully, Auger agreed.