Mystery is a genderfluid coydog from America. When they were young, barely six months old, their small family was attacked by a group of Luperci. In this event, Mystery contracted the Luperci virus and their family was slain. Mystery's brain managed to twist the events in their mind and believes that the people that attacked their family are still after them.

After these events, Mystery began to see a pair of two apparitions. Lucifer and Crowley are a pair of what Mystery imagined as demons. As time went on, Crowley became to become somewhat of a mother figure to the merle and Lucifer was like an annoying older brother. These two appear and shadowy shapes that Mystery talks to and both have red eyes.

Mystery traveled around America, moving from place to place until they came to Nova Scotia in the spring of 2017. After falling into a hole on Anathema's borders, they were rescued by Lukos Greyfire and taken to Avinalora for healing. Since then, they have decided to stay in Anathema.

With Anathema's disbandment, Mystery went to live in Halifax with Adrian Raven-Shadowryn and later Kitiara Birch. And then they left the city and joined Mistfell Vale 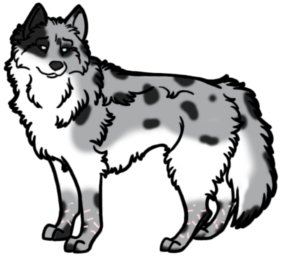 Mystery is a peculiar canine. They seem the most expressive while alone with their two hallucinations and seem to be very quiet around strangers. They shy away from large groups of people. Mystery is submissive to their hallucinations and quite introverted. They are polite but are easily scared. They create the illusion that they are friendly, but in fact they are very paranoid and do not share much information.

Mystery is kind and gentle. They will help those in need, but they need to summon up a lot of courage to help others with their paranoia. They are also very curious and will approach others but with much stealth. They are very pleasant to be around but they do not like meeting more than one person.

Mystery is kind of spacey. They pay more attention to the voices than people talking to them.

Her Myers-Brigg type is The Mediator (INFP-T)

Mystery was born into a feral group of hybrids and was born without the Luperci virus. The group consisted of only seven adults and three pups not including them. Their father was a coyote and the second-in-command and their mother was a dog that was a newcomer. Mystery's first six months of life were spent learning to hunt and fight from the other members.

And then tragedy struck. A group of Luperci attacked the small pack for encroaching on their land. The attackers had an advantage over the non-Luperci with their Secui forms and slaughtered the adults. And then they went on to the pups. Mystery was nipped and bitten by several attackers before being thrown into a pool of blood left by a slain Luperci attacker. From this even, Mystery contracted the Luperci virus.

The trauma of the event caused amnesia. Mystery woke up remembering the incident in only flashes. They spent the next few months of their life in fear after their schizophrenia started to manifest. Not long after the incident, two shapes appeared to Mystery, urging them to run. They soon became genderfluid after the incident and believed that the people that killed their parents are after them.

As Mystery traveled, they did cross paths with others. Some of them tried to take care of the young pup and taught them a few things but the voices kept telling them to run and they did.