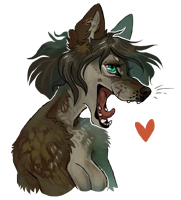 Morty is a Sworn member of the Brotherhood, and is a long-time member and is one of the pack's oldest medic, in Casa di Cavalieri. 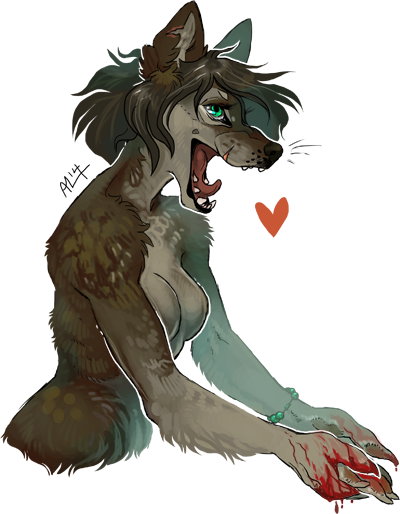 Morty is a purebred wolf and definitely shows it, with a muscular body on the slightly large end of the scale for a female. Her build is compact but quite thick around her shoulders and midsection, making her a little boulder in her four-legged forms, while on two-legs she appears more curvaceous. She has long limbs as well, and a pretty, feminine face often twisted up into a smile.

Morty is a grey-brown tone throughout, with a base Flint(#6E695C) coat. She has darker markings in Birch (#3E3828), including: a dorsal stripe down her back, her shoulders, thighs spreading down the leg, and mane. Her ear-tips and a splash of color on her muzzle are also this darker color. Underneath is a subtly lighter Granite Green (#8E8778) hue, splashed from her chest to her belly, and also creeping up her arms and legs, as well as the ruff of her cheeks. Standing out against her dull-colored pelt are her Eucalyptis (#22985E) eyes. 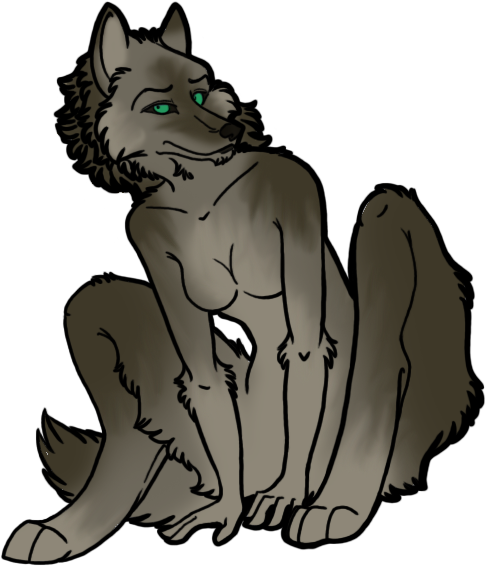 Morty's great-grandparents were a sailors from Europe. They shipwrecked on the coast of Canada but were taken in by a population of Labrador wolves, most of them outcasts from more feral packs by relying more and more on their Optime forms. The sailors only brought more of this sort of learning and technological knowledge with him, and founded a sort of colony that would rely on a newly-constructed built to fish in the Hudson Bay, a questionable endeavor.

Fast-forward a few years later, and the sailors' grandson, Morty's father, met a beautiful Hudson Bay wolf while acting as a "missionary" of sorts to the more feral Luperci populations. After a controversial mating between the two, Morty was born -- and immediately wanted to go with her father back on the ship. She became a lively young woman and a troublemaker, either adored or hated by those around her, and got in her fair share of fights.

One of these fights escalated, and Morty quite by accident killed her first wolf. She was not horrified by the gruesome death, but rather intrigued by it -- and so, quite understandably, she was chased out of the settlement when her remorseful apology was shattered by the rather dazed grin on her face.

Morty went on the road then, and was nearly killed by a mother bear when she tried to attack one of the cubs for the use of its pelt. A wandering doctor found her and treated her, and then took her on as his apprentice when she expressed a desire to be a medic, too -- because it brought her closer to the blood and guts, of course. She was nothing but friendly to her patients, however, and while she enjoyed every second of sewing up a nasty wound, she also enjoyed seeing the wolves recover and thank her and then go on their merry way.

She made a lot of friends in this way, and some told her of the great packs of Nova Scotia -- some who might desire a medic like her. She was immediately disdainful toward a lot of the groups for either being too exclusive, too backwater, or too peaceful -- but then she heard of Casa di Cavalieri. It was a pack of warriors who'd definitely have their share of gruesome wounds and battle, and they fought for the right reasons, which Morty truly did appreciate. She joined the pack and extended her help right away.