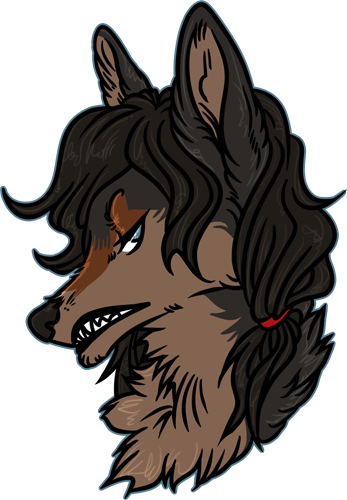 Merari Tears was born in Inferni, the daughter of Redtooth and the Aquila Vicira Tears. She was born on the eve of the Inferni-Salsola War and rescued by her father when the mansion burned. When her mother became Aquila, the clan migrated to their ancestral homeland; Merari's first winter was one of hardship and starvation, but she and her brother survived to spring. Upon reaching the adult ranks, Merari focused on bettering the clan through menial labor (with a focus on woodworking and livestock) shirking any "real" responsibility. Unlike her ambitious littermate Boone, she was lackadaisical in life and content to skate by.

However, her life changed drastically when terrible storms hit Inferni. Merari attempted to support her family (now expanded with two new baby brothers) through the trials that followed, but as a rift grew between Boone and their parents, she found herself unable to choose a side. In the end, the violent death of her little brother Rhodes was the final straw for their family and Inferni; Vicira disbanded the clan and disappeared that night, with Redtooth vanishing shortly after during his search for her. Abandoned by her parents, Merari chose to join the motley group of coyotes left behind. She remained with The Cartel for a couple months until, disenfranchised with the band's directionless debauchery, she set off on her own to find a place with steady work and purpose.

This brought her to Palisade, where her work ethic landed her an apprenticeship under the Braithwaites. For about a full year she lived in Palisade, hard at work (and hard at play), until news of a northern coyote clan indebted to the ambitious Del Mars reached her ears.

Realizing that her fool brothers had gotten themselves into trouble, Merari set off to warn them.