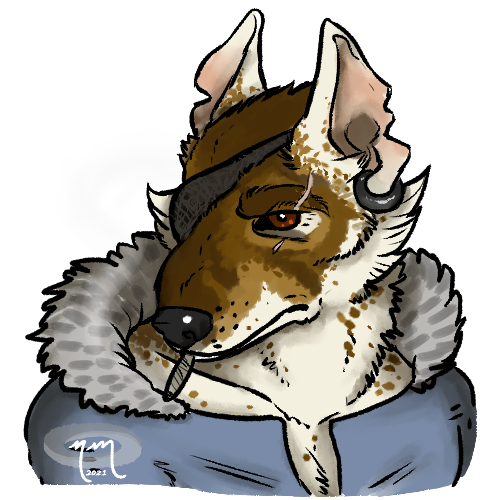 Macbeth is a member of a traveling group of three Luperci (Romeo, Tempest) who perform music and dance theater for pay. Previous to that, he was a working dog in Maine, and then later, Portland.

A gruff and terse guy, scarred face, smokes, very pirate-esque. The “leader” of a group of three performing Luperci, but only due to age and experience. He is very protective of those he performs with, but portrays an air of distaste with them (and with everyone in general). In the show, he acts as the narrator and poet, his deep voice lending to the power of his words, he very easily captivates the audience with his well-written and performed narratives.

Macbeth has been conned, tricked, and betrayed too many times to count, so it takes a lot for him to trust someone. It takes even more for him to be nice to someone. In general society, he is introverted and disgruntled, but does have a great sense of humor which typically can be brought out through drinking and good company.

When alone Macbeth is quiet, almost sad, but his mind is constantly churning with new stories to tell and songs to sing. Having never had a lover last very long, his stories trend towards tragic romances. Macbeth appears as a stocky, mostly dog-like figure, with stiff, thick muscles. His genetics are an amalgamation of dog, coyote, and wolf, though the dog comes through clearly especially in the face. His muzzle is convex and ears pointed, much like the bull-terrier. However, his strength and size belay his wild, wolf and coyote ancestry.

His body is riddled with scars, the most notable of which are his lack of a right eye (which his keeps covered with an eye-patch) and slash across his left eye. His fur is shorter than the average wolf or coyote, and in the winter he bundles up with layers to stave off the cold.

Macbeth smells of what he spends the most time around; the wild, and clove cigarette smoke. He does bathe as frequently as he can, and so can often times smell of soap.

The gruff male is no stranger to clothing, costumes, and accessories, using them as a means to liven up his story telling. When not performing he dresses simply, but still retains the accessories such as bracelets, earrings, and cuffs; he prefers larger, chunkier pieces to compliment his stocky physique.

Macbeth (not his given name) does not remember much of his early pup-hood, save that he was born to a severely destitude family living outside a Luperci settlement in Maine. Not even to weaning, he and all but one other from his litter were given up to an orphanage of sorts nearby. He never saw his birth mother or father again, nor does he know their names or where they are currently.

The orphanage was run by Luperci practicing a hybrid religion of Catholicism and Buddhism. He was treated well, fed, and reared as best as the handful of nuns and monks could. Eventually he became of shifting age, and was forced to head out into the world on his own. He made his way South to Portland where he was able to find steady work as a dock-hand, eventually even securing himself a small apartment to live in. Life and work in the city was difficult, but it allowed him the chance to see the comings and goings of many different kinds of traveling Luperci; he began to romanticize such a life.

Macbeth eventually worked his way up to head longshoreman at one of the busiest ports in Portland, now he was thrust into a political arena that he did not wish to partake in. His staunch attitude and refusal to play the game resulted in another group of dock-workers attacking him and taking over his association. Left blinded in his right eye, badly scarred and battered, Macbeth was forced out of the city.

Taking this opportunity at a new start, the now middle-aged Luperci abandoned his Catholic first name and dead-to-him surname and started going by Macbeth. He began his ever-dreamed of life of travel and performance, making his way across the Northeast Americas and into Canada to share his love of song, poetry, and all things beautiful in life.