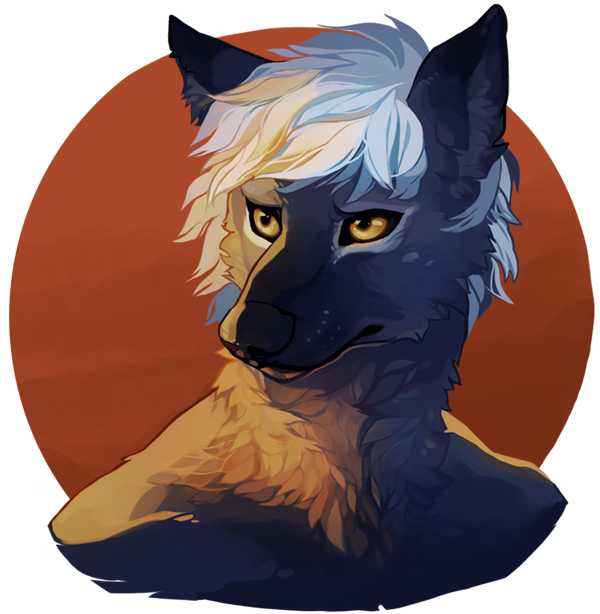 Lotan Amaranthe is a wolfdog living as a loner. He is a skilled fighter and well-traveled individual.

Born in Krokar, he was raised alongside his twin sister Tiamat. Lotan is the son of Semini and Nikita. He has an expansive family whose connections span in several directions, though most notably of these is to overseas Onuba. During his childhood, Lotan's parents lived in different packs and this saw his family traveling between them with frequency. Over time, this (among other things) caused problems between his parents, who eventually separated. Directionless, Lotan struggled to find his place within the pack.

After Tiamat left Krokar to look for their absentee-father, a directionless Lotan became isolated from the pack. He spent much of his time with Pazuzu Lykoi, a loner who was friendly with his family, or in the woods with a wild boar. The birth of his mother's second litter coincided with Lotan's decision to leave his home. Alongside Pazuzu, the young man traveled to Portland under the premise of locating his sister.

The two sailed across the Atlantic, stopping in several port cities. Originally meaning to sail north, bad weather altered their plans. Instead they traveled to Al-Iskandariyya, where Pazuzu's near-mythical father had settled. They stayed here for some time, until rumors drew them deeper into the desert – and to both their surprise, Tiamat.

What followed was the first of several violent, bloody incidents incited by Lotan's sister. He was among the party directly responsible for a coup in Onuba, and a fiery disaster in Erie?.

Though a return to Portland saw a return to normalcy, this did not last forever. Tiamat once again abandoned her family and traveled to their birthland for reasons unknown. An ever-dutiful Lotan set forth to find her once more.