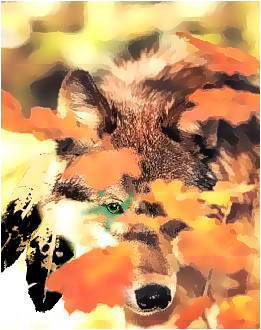 Lahleia was born to Mephiz Damaichu and Moacir Damaichu in Quebec. She dwelled with them and her various siblings for a time and then left, seeking adventure and information about her grandmother, Ruby, whom her mother had told her was very much like Lahleia. She eventually made her way to Bleeding Souls in 2005 where she joined the Storm pack. Here she learned of Ruby's role as alphess of Silent Dawn, much to her surprise. She gained the rank of Wahrer, but after only a months time, after a run in with a coyote on Inferni lands, she left Storm and Bleeding Souls never to return.

Lahleia then traveled North to her birth land, searching once again for her family. But the territories they had once inhabited were abandoned, her family apparently had scattered to the four winds. Lahleia became a loner and wandered West into North America. There she was accosted by a male coywolf halfbreed, raped and beaten, and then discarded. From this encounter she became pregnant, but not wishing to carry the pups to term she set upon self-starvation to end the pregnancy. She was only partially successful, still-birthing four pups but delivering a healthy pup. He looked nothing like the male who raped her, in fact he had the coat of her father, so she kept him. Zalen she called him and she raised him on her own.

The two were inseparable, but Lahleia made sure to instill in him a fear of coyotes as well as kept secret from him all of his family heritage. She did not want him to know of Ruby and her tie to Bleeding Souls for she did not want her son to repeat her mistakes.

In the winter of 2008, when Zalen was nearly 10 months old, he and Lahleia were attacked by a band of coyote and dog half breeds. Though she valiantly tried to protect Zalen, the two were separated and she was struck down, killed, and eaten by the coyotes.

In her youth and time at Bleeding Souls Lahleia was carefree, humorous and naive. She would be as likely to crack jokes with someone as to pick a fight with them. She was also quite flightly and haughty, but at the same time gentle. She also loved to carve and was quite adept at all forms of carving including wood, stone and metal carving.

After leaving 'Souls and unable to find her family, Lahleia became reserved, nervous and quiet. She would often fall into bouts of depression. She also became very secretive, even to the point of lying.