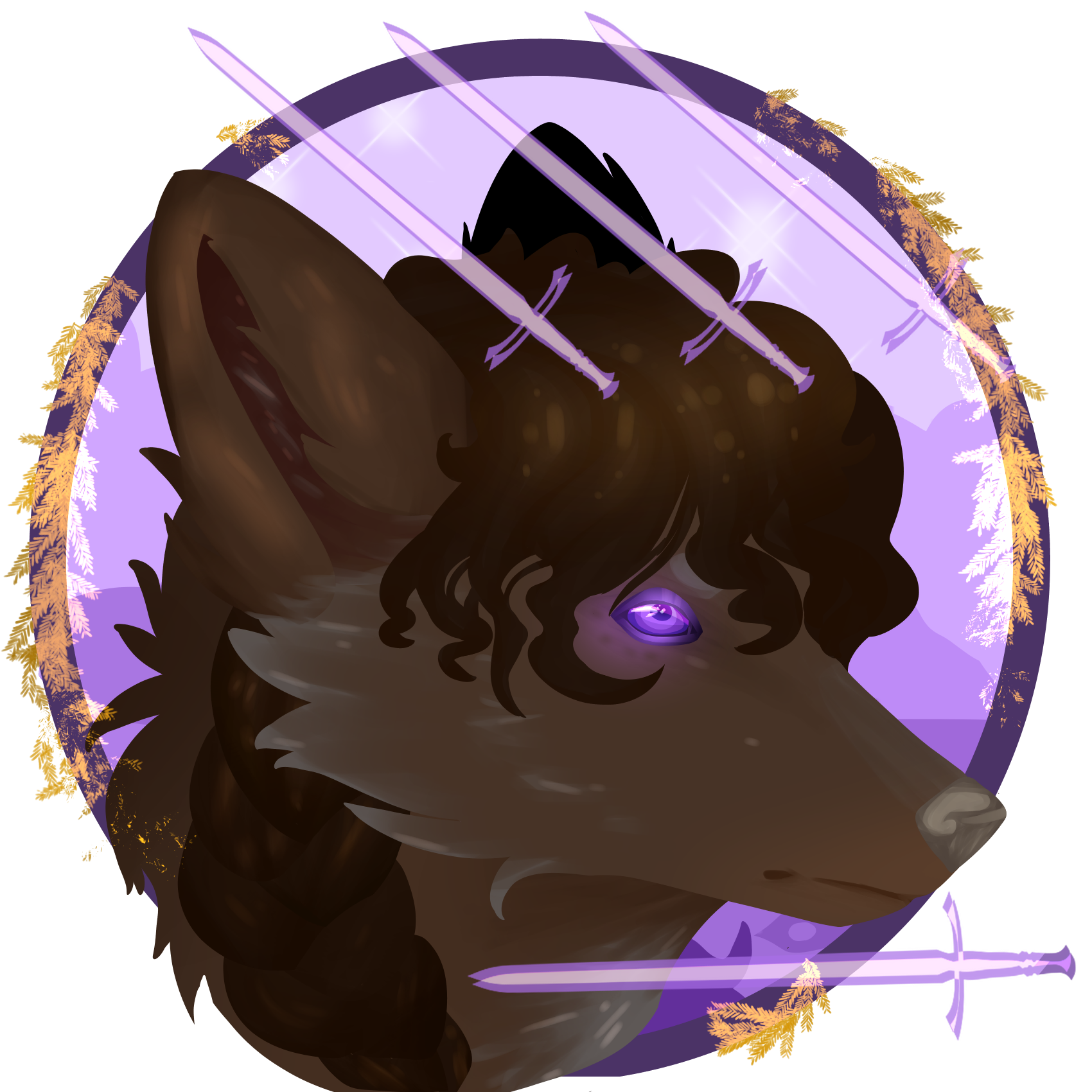 Kule del Morte (formerly Kule Pana, married to Liam del Morte in Jan 2022) is a Luperci Verto, born in 2019 to a wolf-coyote father and full coyote mother. They were born alongside two siblings.

When they came to 'Souls, they were a non-Luperci, but after becoming infected through an encounter with Liam del Morte, their life's potential directions drastically opened up. They traveled with him for a short while, finding Concepta Driscoll along the way. Wanting to take Concepta to a safer place, they went to New Caledonia and joined their ranks right as shadows fell over the kingdom. While at first hesitant to stick around to see the dark times to the end, Kule's resolve to build a home in the Kingdom overtook the urge to run. They stood their ground.

Their purple eyes, from which Kule Pana earned their name within their pack, are by far and large the most striking feature they own in the physical world. Other than that, Kule is average in everything. Size, pelt, face, all of it remains mediocre to the end. The air around Kule makes this mediocrity not so much painful as it is a comfort. Taken out of another time, before all this change hit the world of canines, Kule's way of expressing themself is as simple and to the point as their body. When they smile, they smile. When they frown, they frown. It can't be put in a way more interesting than that, there are not often mysteries to uncover beyond what they show others. When there are such secrets, they are tightly hidden to the point where not even Kule themself may be aware of them.

Kule's agouti pelt appears as a mixture of dull browns and grays. Their underbelly and paws contain the most gray coloration. They are firmly more coyote than wolf, only small traces of wolf blood can be noticed, primarily within their smell and size. They step lightly and with purpose. They do not groom themselves outside of what is expected hygiene for a non-Luperci, although after becoming a Verto they have taken to braiding their long unruly mane for practicality's sake. As they are of medium expressiveness, they do not tend to make huge shows of dominance nor submission beyond what they think is enough to placate (or intimidate) other canines.

Lupus: 35 lbs (16 kg) ↔ 24 in (60 cm)
Kule hasn't forgotten this form in their recent change and still uses it frequently. They use it especially when they are feeling nostalgic for their non-Luperci days. In this form, they are the least threatening. After all, they could only be a scavenger as a non-Luperci, nothing more.

Secui: 135 lbs (61 kg) ↔ 35 in (89 cm)
Feeling exceptionally powerful yet strange in this form, Kule doesn't use it as often as Lupus in everyday life, but still shifts into it occasionally. They are still getting used to how they move when in it but thoroughly enjoy being shifted into Secui form. This may become a preferred form for them overtime. After using it in a successful hunt, they feel more confident with it. 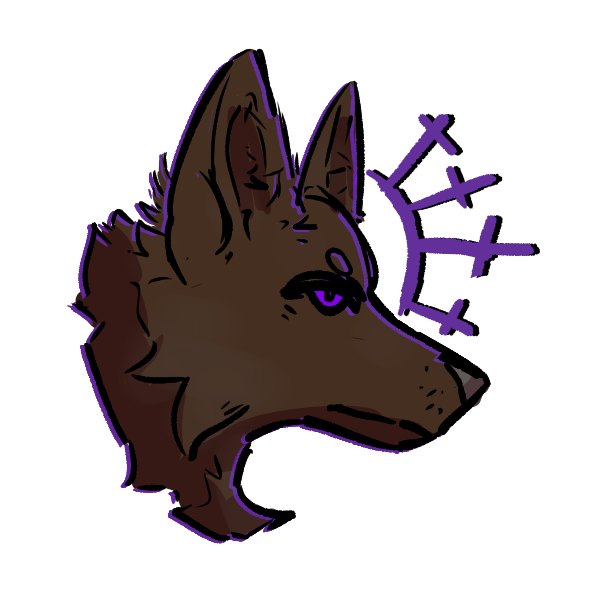 Kule was raised alongside non-Luperci that have not strayed from the older, 'natural' (debatable) ways. They settled into this lifestyle from their upbringing and embraced it wholeheartedly. It isn't that they discriminate, or are against advancement; far from it, Kule has a curiosity about the world and is always looking for ways to improve themself. However, they would not sacrifice their roots at any opportunity that comes their way. They're open to new experiences, but they wouldn't jump headfirst into adventure. They're cautious and skeptical of what other creatures tell them, and shrewd enough to know that anyone promising a miracle might be spinning a tale.

They try to respect all forms of life and remain open-minded. This trait of theirs led to them being 'conversational' (in a manner of speaking) in low speech, specifically with crows and ravens as those birds shared Kule's past scavenger lifestyle. They still often find themself sharing meals with these corvidae, hearing bits of news from them.

Walking with one paw in the feral world, and one foot in the Kingdom, Kule hosts odd moral lines that they twist to fit their needs. They will deal with threats of any kind with savage abandon, but they rarely if ever hunt for sport, and they find the idea of disrespect towards a corpse abhorrent as it is useless. They try their best to keep their connection to nature whole, while balancing a growing lean towards the studious pursuits. They are an introverted animal, they speak little and only say what is important to them—yet at the same time they would do anything for a loyal, close friend. Budding as a creature of duality, Kule tries to keep their cool as their foundation morphs into something entirely new.

Kule's main motivations are instinct-driven: they want to survive and reproduce. But after shifting for the first time, Kule has finally found that there's something more to life than previously thought. It creates a maddening wanderlust within them.

Demi-bi, Kule prefers males sexually just for their biological compatibility but wouldn't turn up their nose romantically at anyone else.

Spiritual, not religious. Kule believes in reincarnation and feels heavily connected with the circle of life. They believe it's spiritually important to remember one individual's insignificance compared to the whole of life.

Italics indicates an unknown relationship; they may be offboard or the relation is merely uncertain.
* indicates character does not know this person by name.

Within The City Square: A quaint cottage, it is one of the smaller stone houses in the square, complete with dusty green shudders and mismatched stones. The kitchen is modestly stocked, and the front room is equipped with a ratty couch and fireplace that are serviceable for entertaining guests. The two back rooms have been established as sleeping quarters.

Most of Kule's possessions have been given to them by Liam del Morte: he is a merchant with more ready access to goods. These gifts include a full outfit of leather and a cloak. They have now taken to attaching a knife to their upper leg.

Kule comes from a scattering collective of packs located in a small area of North America simply referred to as 'Kulupu', meaning pack or group. Each individual pack is typically one breeding pair and their litter, with maybe one or two outsiders. Packs that are apart of the larger community known as 'Kulupu' are assumed to be on good terms with each other even if they rarely meet, as they are usually connected by blood however distantly. There are a few Luperci packs that try to maintain trade and communication within the community, but because many of the packs are non-Luperci these communications typically fall on deaf ears.

Kule themself was born to a litter of three. They were never particularly close to their siblings, but tolerated them and didn't fight much with them. They grew up not understanding much beyond their own language and culture. And although they loved their family, but there comes a time in every canine's life when they must leave their family and try to make their own. For this reason, Kule wandered. Although their primary goal was instinctual (reproduce), Kule did not feel particularly hurried to fulfill this.

Then they met Liam del Morte, and everything changed.

♄ Kule gets infected and becomes a Luperci Verto.
♄ Kule joins New Caledonia, and becomes mates with Liam del Morte. In their first month there, they earn the Wolfsbane Co-Rank (Tier I). Threads

♄ Season of Mastery! Kule earns the Rogue Co-Rank (Tier I) and earns Tier II and III of their Wolfsbane Co-Rank. Threads

Back to Top of Page