Khyren is a tall warrior huntress who will do almost anything for the people and the pack she loves without any thought for herself. She is hard to read, strong, and steadfast in the face of others. Though very stoic, she can be playful and has a sensitive side she only dares to show the people she loves. If you want to really know her, you have to gain her respect and she will slowly upen up to you. Need some armor? Just ask. Need some training? Just ask. If she sees injustice, she will not stand by and let it happen.

If you want to thread with Khyren please DM me on Discord or PM Khyren's profile. Thanks my dudes! :)

In Khyren's Lupus form she is a muscular black she-wolf with deep, emerald-green eyes. Her tail is laced with small stripes of silver and grey at the very tip. She has a long tail, large ears, and a slim muzzle, unusual for her wolf blood. Her green eye the right has a sliver of gold coming from the pupil to the edge of the iris. She is a large wolf. When in Optime, she likes her mane combed back and tied into a bun or braid with beads and feathers sewn into it. It is medium-long length and dangles over her eyes at times. She has muscular, long, front legs/arms and large paws. When in Optime she had developed her strong arms from using her bow frequently and climbing. She just naturally has large hands/paws. Her tail is long and moderately fluffy but sleek and spiky in some places. 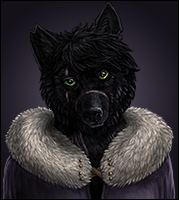 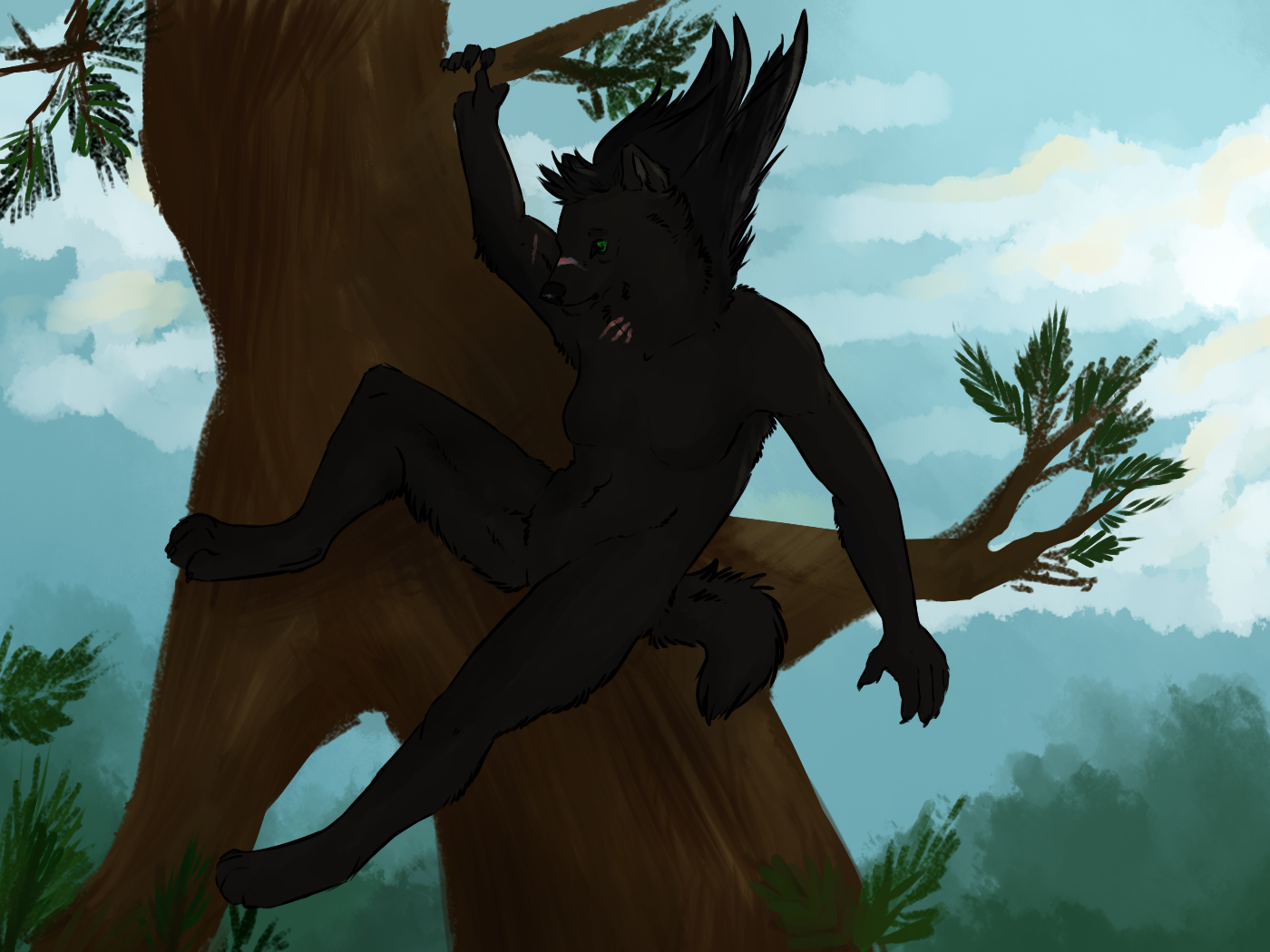 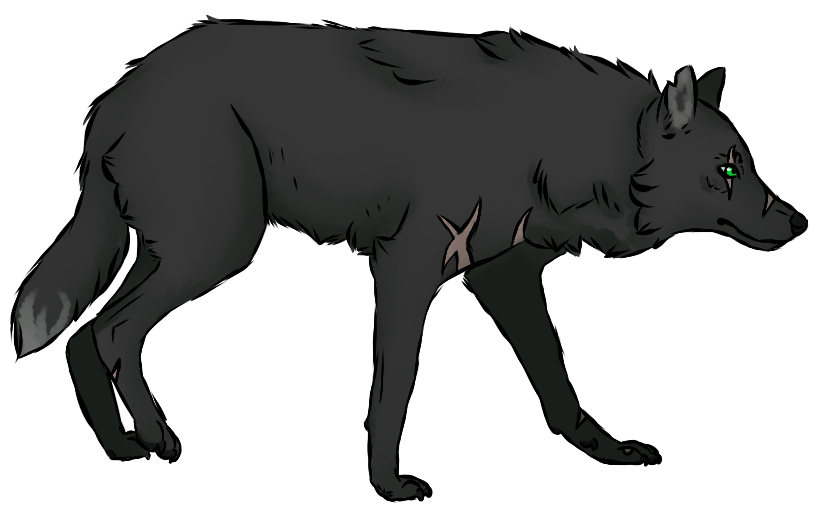 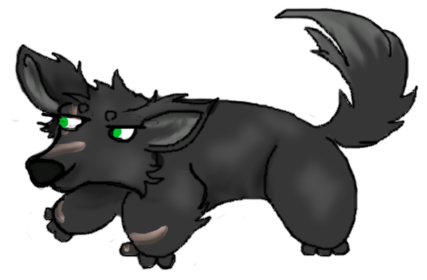 Khyren has a bit of a mysterious personality. She is a strong silent type, and a loner at heart. But has always wished that one day she would find love and be a social creature. She is secretive and suspicious of others. It takes a long time to win her trust unless you are of Casa Di Cavalieri. She holds a grudge, but is learning how to forgive, if you are someone close to her, she may forgive you in no time. She loves hunting and her favorite prey to kill is squirrels, because they are fast, fun to track in the treetops, and hard to kill. It makes hunting more fun for her if it is a squirrel hunt. She is tough on the outside but soft on the inside. Someday she might be a real hugger to those around her she knows, trusts, and cares for. She loves pups, no, she absolutely adores them! She is someone to look into if you want her to watch over and protect your pups. She is undoubtibly protective of youth and otherwise. If someone got to know her good enough she can be a bit more outgoing, kind and loyal. She has begun to be more socially active and trusting and has better social skills due to her time in different packs. If you want to learn more about her personality, you will have to meet her yourself...

Khyren stays in a medium sized room in the inner corners of of the Court House. A perch, matress, and various furs are layed throughout the room. Various leather working projects lay on hed bed. When not in use; her bow and quiver lean against the wall near her bed.

Khyren was first-born and the strongest of the only litter of pups from her mother, Darla, a grey and white wolf, and her father Hotak, a pure black wolf. Her siblings were Rosh, a grey female, Geth, a white and grey male, and her youngest sister Sharma, a black wolf like Khyren. Sharma and Khyren would do everything together. Khyren was the strongest, and Sharma was the weakest, but they were together and doing rougher and tougher things than their other two siblings. Their father became very abusive towards their mother and her brother after their birth. The poor pups always hated it when their father bite or struck out at their mother or at Geth. One day, their parents got into a huge fight. They were well matched and the pups knew that only one of their parents were going to survive the fight. Geth ventures to close to the furious wolves and accidentally got struck by his father, Hotak. Both parents paused their brutal fight and look at Geth. He was lying motionless by the roots of a rowan tree, blood dribbling out of the corners of his mouth. Geth was dead. Darla was furious at Hotak and extremely saddened by the death of her only male pup. She lunged at Hotak's unprotected neck and bit down until she struck bone. Hotak snarled when Darla attacked, but then he was silenced by a terrible snap. She had broken his neck. She sadly went to bury her dead pup before going back to comfort her other pups. In all this Darla and Hotak had been in their Secui forms. Almost a year later a group of coyote Luperci came killed her mother and her siblings. She was all alone. She tried to avenge her family's death by killing the coyote pack out of pure rage and fury. She fashioned herself with and bow and arrows and trained day and night till she could split a twig twenty yards away. She attacked the coyote pack in their camp one night, confident that she would succeed. But Khyren only managed to kill three of their ranks and injure few before she was brutally injured in her face. She was blinded by the blood that flooded her eyes, she had little time to chose to either take few more coyotes with her before she dies or too flee and live with the guilt of never getting to avenge her family. She chose to flee. Afterward she took on the life as a loner, hunting and fighting for herself. Never looking back. But never did she expect that things would ever change for her... She was wrong.

7/9/15 Khyren joined the pack of New Dawn a half starved loner. She had retained submissive behavior as she was confronted by the pack's beta male Altair, at the border where he let her into the pack. She had never been so happy.

8/15/15 Anathema attacked New Dawn and Khyren fought for her pack but the pack broke apparent and scattered. Her pack she had only been in for one month was gone...

8/23/15 Went to Casa di Cavalieri with Munroe Knight's family to cool down and heal.

8/25/15 Left Casa early in the morning after saying her goodbyes.

10/5/15 Was raped by Basilo Lykoi and conceived her first litter of pups.

12/4/15 Gave birth to one stillborn son and a little female pup named Krasivoya.

02/2/16 Krasivoya died in her sleep due to chronic respiratory failure, leaving behind the young mother Khyren with a hole in her heart.

5/?/16 After the asteroid strike left her pack devastated, she barely made it out of the camp alive.

5/22/18 Khyren returned back to the Peninsula territories, wanting to reconnect with her old friend Munroe, but keeps her distance, unsure of what to do. Meets a member named Iorek.

6/25/18 Meets Munroe in Neutral Territories and comforts him, reviving their old friendship, and returns to Casa as a new Recruit.