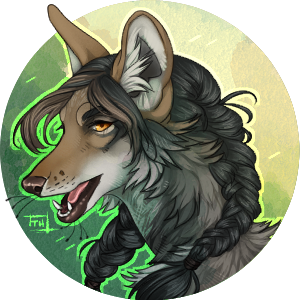 Del Cenere Gang members may assume and reference the following without discussion/asking:

Jimena Escuella is a young woman from Del Cenere Gang, where she is ranked El Elegido. Her specialties include an apprenticeship level understanding of tanning and processing hides. Her early life was marked with grief with the death of a littermate and then the passing of an elder sister.

Some of the Tejadas have not handled the grief so well, and Santiago has taken to drinking to cope. After the raids, Jimena moved out of the stuffy mill and into her own place in Irving. Here she has a clutch of rabbits and is slowly filling the inside with rickety but useful furniture.

She can often be found checking traplines and avoiding her parents, but is usually hanging around with Calhoun. The coyote has taken to fighting, and has spent much of her time training in hand to hand combat as well as using daggers.

Return to Top of Page ▴

Her childhood has been quiet thus far, but marked by difficulty and grief. The loss of her littermate Thiago so early is something Jimena has no memories of, but she acutely feels where his loss has left a hole in each of her parents hearts. Luciana was another sibling marked for death, and Jimena does not recall a time where her eldest sister was healthy and well as she was already injured and deteriorating by the time the young coyote became aware enough to know what was happening.

Passing soon after, she’s watched the divide between her parents and their living children grow into a seemingly uncrossable chasm. Jimena herself is too frightened to try and broach the divide, and spends much of her current time tagging along with Rafaela and her littermate, Esperanza. She feels safest with Esper, even if she gets tired and annoyed of her siblings ever-bubbling anxiety Jimena feels the most secure in their relationship. In this aspect, Esperanza’s overbearing personality is secretly welcomed because Jimena doesn’t have to wonder what her position is between them – she always know where she stands.

Home is not somewhere she enjoys being alone besides to sleep, so if her sisters are gone she will seek out Calhoun instead. So far Jimena has kept quiet and lingered in the shadows, but as her first birthday approaches the girl is balanced on the precipice of wanting the safety and love of her family but also feeling the pull towards independence and rebellion.

Return to Top of Page ▴