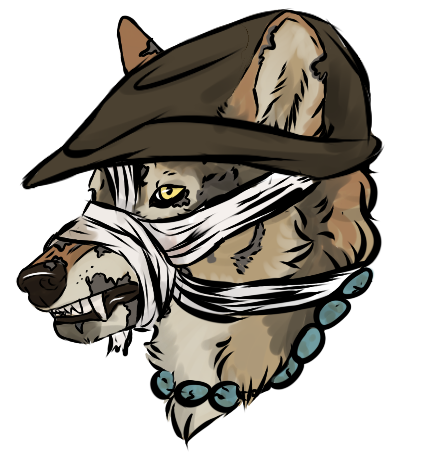 A hybrid of Jackal, Coyote and a little Wolf, Jhiral is a foreign-born man who woke up on the eastern shores of Scotia Nova. Struck with wistful amnesia and a abhorrent ailment, he listlessly wanders, guided and cared for by his protective companion-Raven, Maja, who seems to know far more about him, than the man does himself.

He was a previous member of Inferni and currently is a member of Casa di Cavalieri. 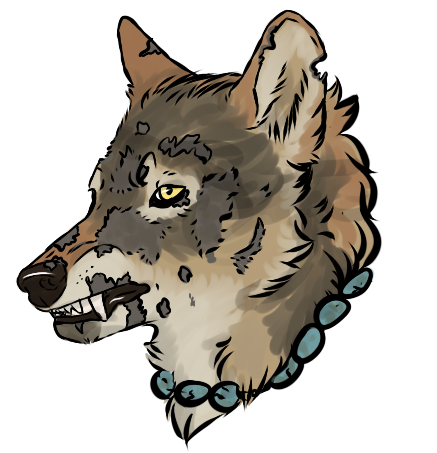 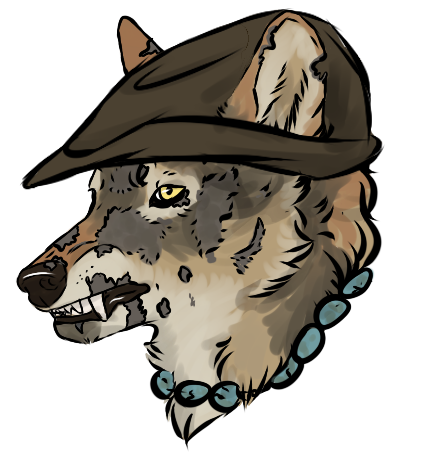 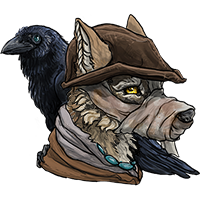 Jhiral is used to being surrounded by members of a nomadic pack, he is somewhat co-dependent, with a former, unrelated father-son/daughter relationship from before, the notion of having a purpose in a family being heavily ingrained in the man's desire for a purpose. Perhaps unlike many others, he is deeply self-aware, and fastidiously grooms and cleans himself, taking care not to accidentally cause damage to himself when traveling or crafting. Given that he covers himself to some extent, the male is self-aware of his appearance, and knows that others, from personal experience, and particularly those with certain religious or narrow mind-sets would be offended by his visage.

Alone, the hybrid's physical condition or illness and faint mental instability has a deep and long-lasting impact on quality of life. Jhiral quietly treats himself as something almost akin to a meat-puppet; possessing a low, detached view of himself compared to others, while his mood often is near-serene with triggered spikes of aggression and erratic paranoia, more often harming himself instead of seeking out others for such vicious outlets. Jhiral does have a pragmatic and practical outlook on life, seeking out more to make and use, and new ways to improve himself and others. He also possess a varied skill-set that helps him survive alone or compliments others, from the basic survival skills like hunting, cooking, medical experience and the like, to some woodworking, trap-making, creating useful or aesthetic items from natural materials, to writing, reading, drawing and some combat ability.

Alas, the male is effectively mute, though able to whisper some words and emit a loud, distorted howling scream, he mostly relies upon some sign-language, general non-verbal language, writing or calling upon his avian counterpart, an intelligent if sometimes sardonic raven, to speak with those that care to have patience with the perhaps-indirect method of vocal communication.

A old, worn cottage out in the lands of Inferni, it has a small out-building close by, with a half-broken picket-fence surrounding the property. Currently not the best condition to live in, but it is a 'work in progress'. Furniture and items have been re-arranged, the main room/kitchen is somewhat prepared, with a cooking pot in the fireplace and some food-preparing ability in the kitchen. The bedroom is partly sorted, a small side-room is Jhira's "self-treatment room" which smells of old blood, soiled cloth and herbs, equipped with a stool, a table and a bucket with a few small containers.

Jhiral was born into a Jackal village, his gentle features earning him positive attention until he began growing into a adult. It became quite apparent he was neither capable of feeling much pain, and with a form that seemed to outwardly 'rot' to the less understanding folk, he became more and more estranged from his village, trying hard to remain there, covering himself from prying eyes and operating in the dark, before one day he was warned away by those who refused to show their own faces.

Leaving with possessions and a desire to remain part of a family, he found himself following and slowly integrating with a band of wanderers, spending the rest of his younger life in a nomadic 'tribe' comprised of outcasts and remnants from smaller packs in Eastern Europe, led by a religious mother and father figures. Jhiral quickly learned from patient pack-mates and picking up skills to compensate for his relatively sick, quiet nature as well as the attention of a potential avian 'friend', whom belonged to a more eloquent, higher regarded woman.

Before he was crooked and silent, with these off-cuts shedded by their fellows like waste-fur, he became strong and able to speak, write and make things with his hands, even taking a active role in protecting those who took him in, earning himself plenty of scarring for a selfless service. Quite importantly too, they cared for him, preventing his condition for worsening, even managing to reverse it slightly, with hygiene-awareness and medication lacking for what his distorted features needed.

Alas, whilst they made their way to and fro, hunting, bartering, working or sometimes filching what they could, they were attacked while resting near the shores, overwhelmed by individuals greater in number, strength and aggression, and soon to also be seen as sadistic as the captives were taken on-board an awaiting vessel. The purpose was not far from potential slavery and profit, and given where the ship sailed towards...

Jhiral would remember very little, save for flickers of being harmed in the name of information-gathering, spates of darkness... and then awakening in the warming sunlight of a cool Spring's pleasant day, laying on a large piece of wreckage gently bobbing on the shoreline of a backwater land. His body sheathed in clothing only partly-familiar, and accompanied by a dark, avian creature urging him to move onward; as there was nothing left behind.

Thus as one life is changed in the darkness and another given in light, Jhiral would travel inland and almost instinctively westwards, encountering a new world that, perhaps had been more familiar in the past, or to his older bloodlines.

Upon joining Inferni, he claimed an old cottage as his current hideout and slowly integrated himself into the clan. He created traps and trinkets for Vicira Tears, while offering medical assistance to others and trying to patrol the eastern borders in a defensive fashion.