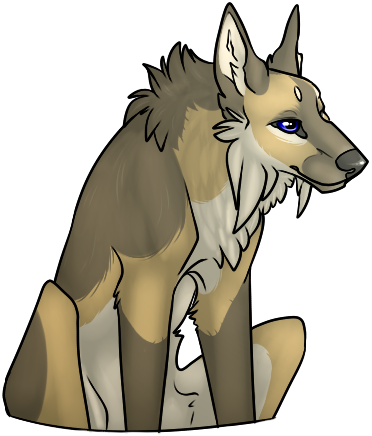 Jackal Katruk, also known as Jack, is the son of Vaughan Katruk, littermate of Fox Katruk?, half-brother of the late Sky Rhiannon and is a current loner seeking entrance with Anathema. Quiet and typically cynical, Jack's a man of few but biting words. Though intelligent, his thoughts suffer from years of alcoholism and sleepless nights. He is clever and charismatic at his best, but a drunken asshole at his worst. His loyalty to something or someone he holds dear knows no bounds, but he's just as quick to change his mind about liking something. He's a deviant and a flirt, but before any of this, he's also a merchant- bragging that he could sell water to a fish if he so pleased; and it's not far from the truth, even if most of his sales tactics involves lies and wordplay. It works perfectly, every time! Trust him!

In better health, without his smoking and drinking (and at times gambling) problems, Jack's still far from perfect. He's selfish, greedy and self-serving at his core. Though he can care, and does know empathy and sympathy, it's not his first nature. Naturally, he is opportunistic, taking advantage of others' plights to better his own situation, before only then taking any pity, if at all. He has morals, but they are extreme- murder, rape and robbery are the only crimes he believes to be worth punishment, and he'll refuse to commit himself.

As a friend, he is useful, and reliable. He's quick to offer a helping hand- even if he expects help in return sometime later. He rarely leaves someone he considers to be a friend out to hang, and would gladly give the shirt off his back for them to be safe; but once all is said and done, they'll owe him. Big time. He always makes good on his own debts, assuming he remembers to, and if others fail to do the same for him, well, he'll force it. His favorite method of forcing repayments? Blackmail, of course.

Openly, he rejects religion and mocks spirituality as being voodoo magic and daydreams. Internally, he believes very much that there are higher powers, spirits and an afterlife- and even fears his own fate on the other side. His outward rejection however has led to his knowledge being very limited, and so, he doesn't have any patron diety of his own that he worships or prays to.