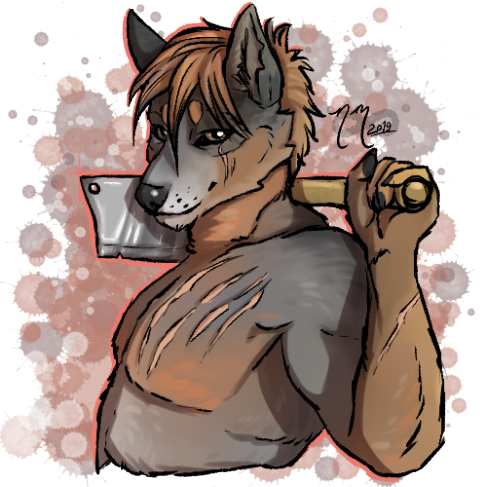 Isaac Coblentz is a First Officer of Casa di Cavalieri, where he works as the pack's butcher. He had a brother, Jonas Coblentz, but lost him during the meteor disaster [1].

Isaac is slightly more dog than wolf, and this carries over into his stocky build. His wolf blood comes through in some qualities of his face and in the pure strength he is able to wield. He is of average height, but with a heavily muscled upper body, very well-defined in the arms and chest especially. His fur is smoother than the average wolf.

His blue heeler heritage is very clear in his coat. He has a base Squirrel (#93897E) coat, more solid and slightly lighter on his underside but "ticked" as per the normal blue heeler on his upper side. The ticking, as well as a patch on his head from his ears to his eyes, are Mine Shaft (#2D2D2D). His legs, chest muscles, cheeks, and "bib" are Copper (#A87234), as well as his brow dots and his shock of hair in Optime. He has a Pearl Bush (#E8E0D9) patch on his muzzle, and Mondo (#4F3C31) eyes.

Born and raised in Tosawi. After traveling to Nova Scotia with his brother, the pair joined Casa di Cavalieri, drawn in by their strong moral compass.