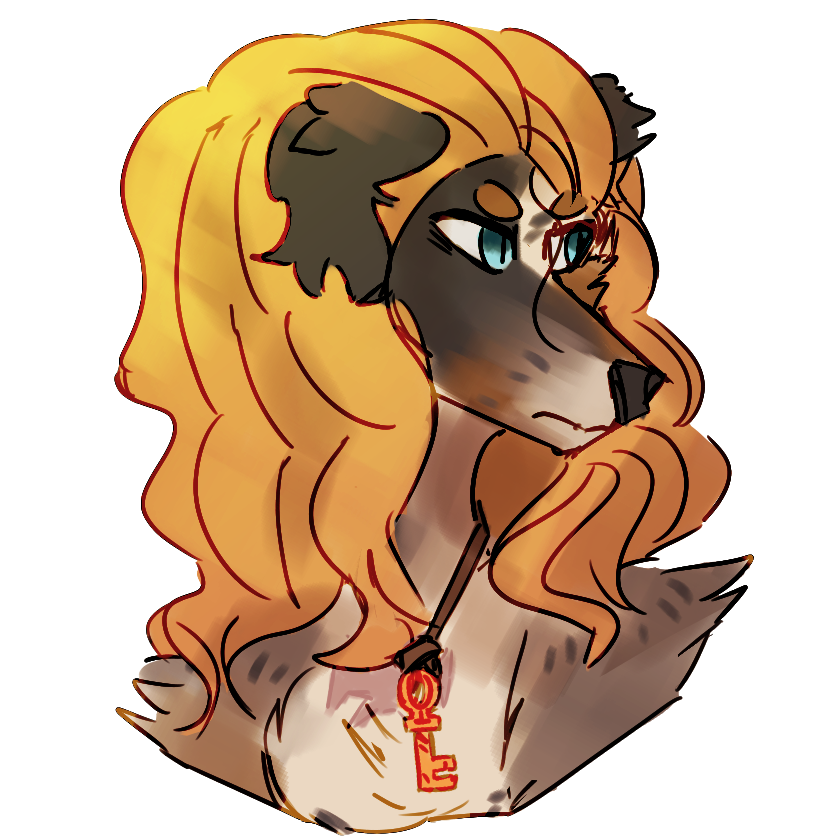 Idrieus Eternity is a member of Salsola, currently ranked as the Paladin, the Elite Fighter of the Shield Tier.

Idrieus is the daughter of Mausolus and an unknown wolf dog male. She lived alone with her mother for a few months before getting separated from her. After wandering around looking for her mother, she was discovered by the Big Five, a group responsible for the murder of females outside Salsola and leaving their corpses within the packlands. She remained with them before being rescued by Artemisia Eternity along with her bear, Cirsium. Although Artemisia wasn't keen about bringing her back to Salsola, Cirsium insisted, and the three returned to the Thistle Kingdom. Idrieus presented one of the Big Five's coins as a gift to the Lord Commander, making herself a proper member of Salsola.

Starting out as a brat, Idrieus laid around for the most part with Artemisia trying to push her towards doing something more productive. She had been forced really to help with the upkeep of the library, a large collection of books Artemisia kept in her residential wing. Idrieus eventually took up a path in combat, mostly to follow after Artemisia. This all came to a sharp stop during the Second Boreas Conflict, where during a fight with the Boreas, Loki Helsi, and herself, Artemisia was killed. This forced her to grow up, and take responsibility to many of the things that were left behind. In her mourning, Idrieus took Artemisia's family name as her own in honor of her and all that she did.

Since taking her work to a much more serious tone, Idrieus continued to thrive in Salsola. When Lokr Revlis was called out and labeled as a Pentiti, he left to parts unknown, but asked her to look after his daughter, Elphaba Revlis. This was a simple task, though took a turn when Elphaba took over the throne of the Boss. This shifted Idrieus to fully hold onto her morals and her own conclusions rather than what others tell her, making her wary of Salsola, even though she would never abandon it as her home.

When sent into battle, Idrieus was often paired up with the former Paladin's son, Grievous Eternity. The two worked well with one another, and grew to have a mutual respect for one another. She finally felt like she had someone she could come to when wanting to speak her mind without being judged for it. Their relationship came to a head when Nickodemus caught Grievous' leaving Idrieus' home after staying for the night. After confronting Grievous, the pair vented their frustrations before Grievous asked her to be his wife, to which she agreed.

Since taking her mate, Idrieus has continued to expand on her skills in combat, holding her position of the Paladin with other members of the Shield Tier. She has taken up the jobs of Libro Guardiana (Librarian) and Historiador (Historian). In June 2020, she gave birth to three daughters, and her husband has welcomed a servant into their home. She continues to balance her work with the Library, the Shield, and her new home life.

A stretch of ruins attached to the western side of the Throne Room, but a small gap between living spaces. The wing in one story, save for the tower at the western end. The doorway at the western end of the residence leads to the main hallway of the wing, and although the tower is also attached to this hallway, there is another wall and door separating it off from the rest of the wing. The main wing is separated into spare rooms, most of which are taken up by Salsola's collection of books, all organized and looked after by Idrieus and her aids. One of these rooms is Grievous' personal room, a room where he is usually growing his own plants. The tower is two floors, with the first floor being Idrieus and Grievous' living space and the second floor being their bedroom. Outside of the tower, there is a small pasture for the horses to free roam in. There is a small separate storage building for their equipment and other storage items.