Ghita Marino is the sister of Savina and Ehno, and the mother of Aro, Sophia, Tony, Lorenzo and Fia. She was born in Monti Sabini, and became a longtime resident of Crimson Dreams — but after her mateship with Jazper Rhiannon-Knight was dissolved, she returned to Italy. 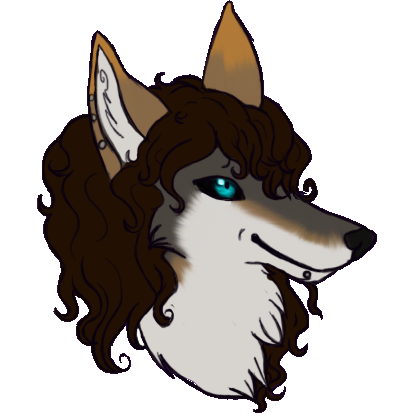 Ghita Marino was born in Monti Sabini, Italy — a very traditional pack of wolves who shunned transformation as well as use of human artifacts. Because her mother and father — Amata Marino and Serge Russo — were not mates at the time of conception, Serge felt shamed of the union and not only left Amata, but disowned the unborn puppies. Despite the devastating blow, their mother managed to give her three puppies a very good life. Though the three went without knowledge of their father for some time, Amata eventually confessed about Serge, leaving the children with an intense dislike of their biological father.

Shortly after their first birthday, Ehno left Monti Sabini to venture around Europe, leaving the three Marino women behind. It wasn't much later, perhaps six months after her brother departed, that Ghita found a mate in a male named Carlo. The two shared a comfortable relationship, and even found themselves preparing for children quickly after their mateship. Sadly, the litter miscarried, leaving Ghita in a deep depression. Though Savina and Amata tried their best to comfort the young female, she left Monti Sabini without word; Carlo departed shortly after the disappearance of his mate.

Upon leaving Monti Sabini, Ghita found herself amongst a pack of nomadic wolves. Having never lived amongst transforming Luperci before, it was a new experience; they opened her eyes to piercings, as well as drugs. She ended up suffering an addiction to something called DXM, used to forget about the loss of her pups and mate — though Carlo had found her amongst the nomads, he left to be with a female named Elli.

The drugs caused more suffering than she was capable of handling and she managed to scrape herself out of the addiction after many months; it was then that she decided to go back home to Savina and Ehno. When she reached the old pack, however, she was greeted by the cold welcome of hateful eyes. Savina and Ehno were nowhere to be found, but Ettore Russo was. Her half-sibling went mostly unnoticed as she departed Monti Sabini for a final time.

Her journey from Europe to 'Souls was boring and relatively uneventful, as she simply hopped a ship with another group of nomads before traveling across Canada. She found Savina in Crimson Dreams, where her dark sister was heavily pregnant with her first litter of pups. Still suffering the loss of her first litter, Ghita hid her distress behind a happy smile, but fled the pack shortly after the birth. Unaware that Ehno had followed her, she roamed Canada for several weeks to clear her head.

Her return brought old faces as well as new, as Ghita met Jazper for the first time. The Rhiannon took control of teaching her how to shift — a skill she had never learned in Monti Sabini or the nomadic pack — and she found herself learning English much easier than she had (or had tried to) in Monti Sabini. Her first successful shift led to the beginning of a physical relationship between the two, as well as an unexpected pregnancy. Though she expected Jazper to run away at the news, he owned up to his feelings and asked her to be his mate. Naturally, Ghita agreed, and for the next two years the couple learned to love each other and respected their differences.

After a painful and traumatic childbirth, the two found themselves the parents of two healthy pups — Aro, a boy, and Sophia, a girl. Since the birth of her first surviving children, Ghita has found herself adjusting to life quite well, and only suffers the most subtle amount of depression in regards to her past. She's developed social ties as well as a proficiency in English that enables her to easily interact with her pack members. Her family has become her greatest asset and she feels very close to her siblings as well as the nieces and nephews born within Crimson Dreams. It was this love of her nieces and nephews that brought about a broken leg in the spring of 2010. Cambria and Mati, another girl from the pack, snuck into the dilapidated Old Red; it wasn't a surprise that the building collapsed. Without hesitation, Ghita plunged into the barn to save her niece, ending up injured herself. The recovery was slow and painful, with the injury causing a noticeable change in the woman.

In the fall Ghita gave birth to her second litter: Tony, Lorenzo and Fia. She devotes herself to motherhood. In 2011 the AniWaya Conflict dragged their pack into battle, and Ghita's youngest daughter Fia is one of those kidnapped by raiders. Jazper fights to bring her home, and decides that the only way to prevent such a long winded war again was to have an army prepared. He moved from Crimson Dreams to found his new pack, Casa di Cavalieri. Ghita refused to follow him, stubbornly insisting that his place was in Crimson Dreams and he was selfish to want to leave. The bitter argument marked the end of their mateship, and when their adult children chose to follow their father, Ghita decided to return to Italy for a fresh start and independence.

Very wild and independent. Ghita makes her own decisions and is very impatient and easily bored. She has a short attention span and can only focus on one task for a few minutes at a time before it becomes taxing and she switches to something else. Her interests include leather-drying and dying, making weapons and necklaces, mapping out the stars and studying the planets, and collecting things. Tough, appears apathetic and sarcastic at first. Once you get to know her, she's a little more wise, but mostly she's hotheaded and a daredevil. Stereotypically fragile, she's still dealing with the loss of her mother, former 'mate' Carlo, and still-born pups. Tends to be bored easily.

Ghita has the coloration of a normal timberwolf, mixtures of grays, browns, tans, and black. Her top coat looks more gray than anything else, because her fur is silver tipped. She has very small paws and a rather short tail.

Piercings: Three in her left ear and two on her lower lip. Typically wears silver hoops in the ear & small studs in the snakebites.

General Build: Smaller than average, although not by much. Lean muscles can be seen, but not to the point that she looks like she works out every day. In secui, her mane is shorter (shoulder length) and sleek, but that is the only real difference. In Optime, she gains curves & long, straight, light-brown hair that she'll typically wear in a half-ponytail. She's working on some clothes. ;3 Overall, generally skinny.