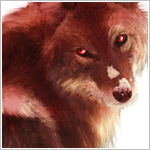 Faolin Mogotsi was born alongside Hybrid Holocaust to Asphyxia Holocaust after she was raped by Venomous Massacre. The two were later abandoned by Asphyxia and adopted by Segodi Mogotsi, to whom she owes her last name. She was previously a member of Inferni, and was a sub-leader of the second incarnation of Inferni. She disappeared shortly thereafter and returned as a Loner briefly before disappearing once more.

It all started with Asphyxia Holocaust. Asphyxia was a strange woman with a complicated past. Up until she became pregnant with her litter she had been in a gang of sorts. They were hired to kill certain wolves, leaders and so on in the bigger cities. Cities that are populated with wolves that have taken on more human lifestyles. She fell in love with the leader, Venomous Massacre, who was a story all in himself. The two had a very destructive relationship, Asphyxia being beaten on a weekly basis, if not daily. She stayed with him though and eventually became pregnant. Venomous did not want children and so raped her again and beat her. Asphyxia managed to escape and ran away. Venomous grew angry and left the group in search of Asphyxia, but he could never find her.

Asphyxia came upon the small band of wolves known as Syemv and joined their ranks. Heavily pregnant they were not about to turn the young woman away. Phasma had helped her through her pregnancy. During her pregnancy she had met a coyote of Inferni named Segodi Mogotsi and the two talked and eventually fell in love. He helped her with her pregnancy and took care of her for the most part. Later on, Asphyxia had a run in with Laruku Tears that ended badly. He attacked her after she somewhat provoked him, killing two of four children inside of her belly. Laruku had not known she was pregnant, they were in the middle of a corn field and it was pitch black. When she told him that she was pregnant, Laruku got scared and ran off when Segodi came to the rescue, taking her back home.

It was not long after that Faolin Mogotsi and Hybrid Holocaust were born alongside two stillborns that Laruku Tears killed. They were born within the ranks of Syemv and Segodi stuck around and helped her feed the children and herself. It wasn't long after that Asphyxia left Hybrid in the care of Segodi and took Faolin with her to find Venomous because she heard that he was still alive. A few weeks passed as they spent time there, but things escalated and everything went downhill. Venomous was back to his old ways, and Asphyxia and him were drinking every night. He beat her a couple times, then when that was not enough he turned on Faolin who was only two-three months old at the time. He molested her and beat her to a pulp. Faolin was scared and Asphyxia threw herself in the middle of it. Venomous turned his attention back on the black woman and beat her. Asphyxia got away long enough to grab Faolin and run. She hid her amongst a thick tangle of roots and did not even get out of eyesight before Venomous found her and Faolin that he had killed her mother.

A voice in the child's head had told of a place called Inferni where she would find a man called Segodi. His name was Acid. He had told her that this was a man she could trust and had told her of Hybrid whom her mother left in his care. Faolin ran as far and as fast as she could, the voice guiding her the entire way. She reached Inferni weeks later, half starved and she was still beaten and bruised, scratches covering most of her frail body. She ran into a girl named Rikka de le Poer who helped her find Segodi and where she was quickly taken into his care. Rikka had come to visit her often and the two quickly became close, like sisters. The girl hardly talked to her brother, and about a month after reaching Inferni, Hybrid disappeared.

Hybrid had run off in search of his father after growing quite restless. Faolin and Segodi had no idea where the boy went and Faolin had grown a bit more depressed. She eventually got a bit better and just lived with Segodi and started to come out of her shell and befriended a few people, including one of Segodi's own, Nyika Mogotsi. The two were inseparable and were always together spending time at the beach. The older girl was more family to her than anyone could ever have been. Faolin enjoyed the time she spent with Nyika and months flew by as she grew up in Inferni. The voice came back a few times, but it eventually just disappeared. Later realizing it was probably just her subconscious helping her through a rough period in her young life.

(note: after this is very brief and may not be in chronological order seeing as I have a hard time remembering three years of my characters life, aha.)

Life fell back to normal for Faolin for the longest time. She had made a few friends, one of them being Iskata Sadira. A very close female to her that she thought of as a good friend, but their differences had separated them for long periods of time. Their races always being in conflict they attempted to see each other when they could.

She had met Gabriel de le Poer one day and things had escalated from there on. They became quite close and in a brief period of time became girl friend/boy friend. That lasted for months until she disappeared for the first time after a run in with Iskata Sadira and her mate. Her mate had attempted to kill Faolin and after Gabriel responded quickly to his attack, killing him in the process. Completely struck by fear Faolin had a break down and ended up running off for a long while. She came back though and things settled down again.

One day she had met up with an old friend of hers Phoenix. She had thought of him as one of her best friends, more so her brother than anything. They were cuddling on a couch in a library reading by a fire when Gabriel found them together and thinking that she was cheating on him. He attacked Phoenix and Faolin flung herself at him trying to explain before he killed him. The fighting ceased and Gabriel stalked off to some place within the city where Faolin followed behind a short time later. After finding him in an abandoned house she swore she would never hurt him like that and had explained their brotherly/sisterly relationship.

Gabriel believed her and that night turned out to be one of the best nights of their lives because two months later Faolin gave birth to Ezekiel de le Poer and Talitha Lykoi.

The territory that they had come to know went up in flames though. Faolin had no knowledge of the part her mate took in it. They escaped and refounded Inferni on new soil where they quickly expanded. War broke out with Dahlia de Mai and Gabriel sent Faolin and their babies to live with Fatin Kali and her brother.

Faolin returned after Talitha ran away to rejoin her father. Turns out Gabriel's younger brother, Andrezej Lykoi, who had caused a lot of trouble before raped their daughter. Gabriel, Faolin, Corona, and a few others ganged up on the boy after he went in for a second attack, hoping to kill the girl this time. They caught him and killed him.

Faolin disappears again, but returns with a friend Akello Paxton after she was washed away in a hurricane he found her and brought her back to Inferni. She soon disappears after that again.

(note: this was her last departure until now and so things should be a bit more clear.)

Her quick departure was shrouded in mystery, but seeing as the woman had disappeared so many times before Gabriel could only be left with the thought that his mate had left with Akello.

Actually, Akello disappeared before she did and Faolin thought she had might of known where he went to. So, she took off after him hoping to return him to Inferni. Instead she had found someone else that looked like him, except he was a wolf. He attacked Faolin and beat her around a bit before throwing her against a hard stone wall which caused her to hit her head quite hard. She woke up a day or so later, bleeding profusely and with no recollection of who she was.

She stumbled along for a few days unsure of what was going out and completely and utterly lost. She had patched herself up, but still had no idea who she was or where she belonged. She tried to find others to ask, but no body knew her. She unknowingly kept wandering away from 'Souls.

Ready to just give up the woman threw herself down on the ground where she curled up in a ball. A male known as Adonis found her and realizing the situation he turned it around for himself naming her Avarice, after his mother. She had no idea of who he was but went along with it seeing as she did not want to be left alone. When she started having vivid dreams (her memories) he realized what could possibly happen and started to drug her on a regular basis to keep her memories at bay so she would never remember her old life. He claimed they could quite possibly help her regain her memories and it would make her feel stronger.

And, so. The two travelled. Although, he had no idea that she had belonged to the land of 'Souls. They pass through the territory in hopes of settling down somewhere near hopefully.

Faolin is small and built much like a coyote, she adopted her mother's long legs, but that only bring her to be the height of an average wolf. She is thin and lean with a bit of muscle on her, although not much. She is fairly fluffy, which adds a bit of extra height and mass to her. Faolin's fur is a deep crimson color that looks like it has a tinge of orange. This red falls along her body in a husky like fashion. It covers the top of her muzzle, head, neck, back, shoulders, thighs and tail while her chin, throat, stomach, legs and part of her tail are covered in cream. Her eyes are a deep blood red.