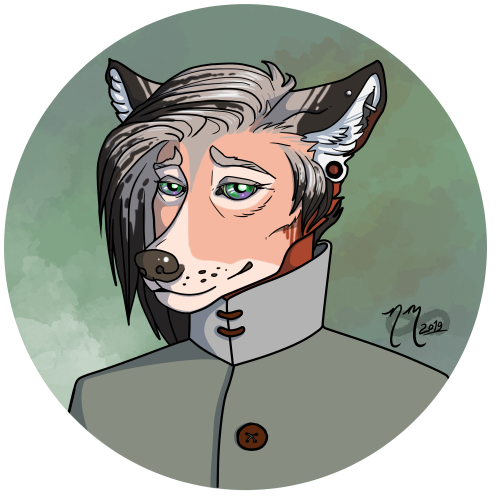 Dirge Lillith Trombetta-Ulrich is a of The Confidant rank in Salsola whom was born to the two high ranking members, Lillith Trombetta and Till Van Ulrich-Lykoi as part of a business arrangement. His birth resulted in the death of his mother, Lillith, whom he mostly looks like, and was raised by his father and his mate with a half-sister that was born around the same time as him.

He is a aspiring chef, and hairdresser within Salsola.

As per Salsolan Tradition, Dirge goes by the alias "Pisces" when he outside of Salsolan land.

Only two months after he was born his family was split up by the plague that swept over his homeland, specifically taking his mother away from them. This made it to where his father was their sole provider, along with his elder brother and the family slaves, Nephele and Phobos . Along with the assumed death of his mother, his sister also becomes sick, and this makes Dirge freaked out a little bit and he actively sticks by his father's side, as well as develop a fear of sick individuals.

Dirge grew up in a household that does not put much importance in the difference in male and female gender roles, in which he was often trained in things that interested him rather than things that were necessarily important to learn. Instead of learning things from his father, he largely takes much that he knows from his brother and step mothers because of his eventual disconnection from his father because of the admission that he is a bastard and that he is a monster [1]. Dirge becomes very devoted to his 'mother' and ends up saving her after a particularly bad fight that she had that involved an Infernian by the name of Nazario in which his future siblings were lost[2] and was yet another effect of the Inferni-Salsola War. From this point on, he asks his father (even though their relationship has become strained) to teach him how to protect his family, and most importantly, become a fully functional member of Salsola, so that he too, could help in the war.

In the wake of the war, his father's mentor is named as Pentiti in Salsola and exiled, with this being a big blow to the Ulrich clan's future. Dirge does not particularly realize how much this influenced his family but notices a notable decline in his father's mental stability. It was March of 2018 when Dirge was confided in by Coaxoch (his brother) to keep the secret of his father's attempted defunct from Salsola, and in the aftermath he spent a lot of time taking care of Till in his weakened state along with covering up his attempt by caring for his extended family by taking up the mantle of provider for his "mothers" and half siblings.

In mid-2019, after the dissolving of his parent's mateship, Dirge isolates himself out in the Blackwoods with his older brother, Coaxoch and actively begins to avoid his adoptive mother, Helena, in which, he starts to grow a hatred for, because her decision to split up their family and make their (Ulrich) influence in Salsola weak, as someone who identifies with the Ulrich clan that he was born into.

Artwork of this character on this page is thanks to Mickeyila@FA, Motth@FA, Nat, Woli.co@FA, & Despi! Visual Designer is Nat! Images in gallery are by the respective artists that are labeled underneath them! Thank you to every single one of you for your contribution to bringing this character to life!