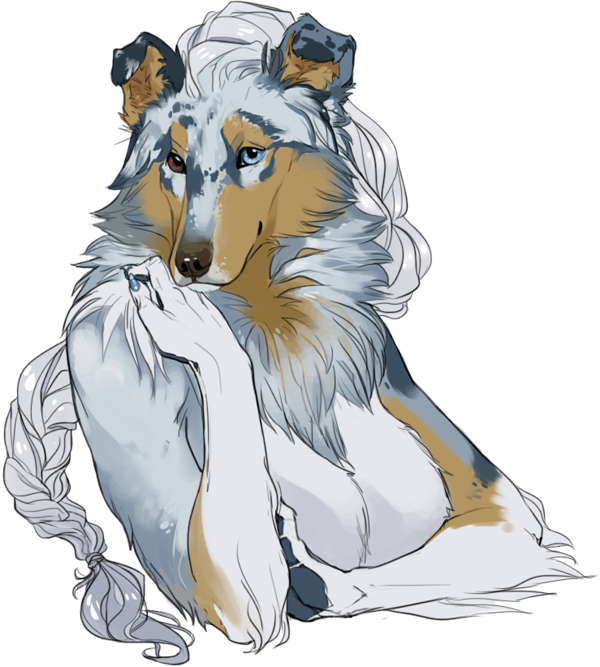 Désirée Noëlle is the daughter of Susquehanna and Jacquez Trouillefou. She was born in AniWaya in December 2009. She is currently traveling with the intention of joining AniWaya. Desi is a type-2 Kuudere. When she was younger, she was very upbeat and naive, but after the search for her father, the interactions she's had with strangers, and finding the man himself, she took a level in cynicism, no longer so trusting as to show her true self from the get-go because Luperci are Bastards. First impressions show someone quiet, but not simpering. She is not rude so much as coolly polite upon first meeting, though as she gets to know someone, she will soften around them.

Desi has a temper. Mild crossings tend to result in disapproving looks down her long, slender snout; these graduate to full on death glares if the offender persists, along with a tongue lashing in one of four languages or a mix of them (where she lacks a word in one, she will substitute from another). But a person will know when they have crossed the line, because this slender wolfdog will go still, displaying a tranquil fury that will, at a calculated moment, segue fluidly into violence.

She is an Ethical Slut. She has a very solid core belief that people should do what they want to do as long as it doesn't hurt others, and that includes herself. See more on the trope in Sexuality.

It is worth noting that she knows none of her half-siblings by Jacquez, though she assumes with the description she's been given of him that half-siblings exist. She is interested in meeting any of her brothers or sisters, or anyone who might know something about Jacquez.

Desi was conceived on September 29, 2009, the product of a night of passion between Susquehanna, a member of AniWaya, and Jacquez Trouillefou, then-King of Cour des Miracles. Her mother had long waited for the day she would bear a pup, but held worries that the tribe would make her leave because she had no mate. Her emotions ran the gamut of elation, concern, despair, anger, and finally joy as she held her one and only child in her arms.

On December 2, 2009, Desi was born just outside the village of AniWaya and named publicly three days after her birth as per AniWayan custom. She lived the life of an infant, sleeping, eating, and being loved, till Hanna had need to leave the pack for a little while. It was time to present her to what family she had in Dahlia de Mai as well as to train Conor, one of Desi's cousins, in the healing arts. The pair made the trip quickly, leaving AniWaya on the afternoon of December 30th and arriving in Dahlia de Mai on January 2, 2010. On the way, they encountered Strelein von Rosnete who offered them a place to stay the night at the Chien Hotel.

Unbeknownst to Hanna till they reached Dahlia's borders, Haku Soul had taken over the leadership of the pack, driving the previous alpha and gamma away. All Desi remembers is a sharp scent, a loud, cruel voice. During the time they were in Dahlia de Mai, Hanna and Desi lived (and played with) Hanna's niece, Mew, and Mew's children, Dexter and Keeleigh and Vesle. The three pups were just a little older than Desi but she got along well with them; they were the siblings she didn't have. There was a time of sadness in the household when Mew was shot and again later when she came up missing, but largely Desi enjoyed her time in the other pack. Above Desi's knowing, the Second Dahlian War was raging.

On April 4, 2010, Hanna took Desi and fled Dahlia de Mai, fearing for their health and well-being in the light of all the violence that had been taking place and fearing that Haku would use her to bear the brunt of his anger as was his right since she was the omega of the pack. She and Desi encountered Kaena Lykoi, second in command of Inferni and Hanna's acquaintance, who escorted them some distance back south. Mother and daughter lived in Halifax for a time, not wishing to bring harm to AniWaya should Haku come for revenge. During this time, Desi fell and got the scar at her hip.

Hanna and Desiree returned to AniWaya in late August. Desi was nearly 9 months old, and was greatly anticipating the adult ranks and her Spirit Guide, but life endeavored to get in the way, as in mid-September Hanna told her who her father was and explained that he had not been present at any point in her life beyond the night she was conceived. Feeling hurt that her mom had chosen poorly and that her father was not around, Desi took to the hills one night while Hanna lay sleeping, taking up residence near Barrington. The older woman resisted leaving at first, believing perhaps her daughter had gone to find her Spirit Guide; but after more than a week had gone by, went to find her, checking first Halifax, then Yarmouth and finally Barrington.

Desiree had taken up residence in a beautiful cottage to the south of Highway 103, just outside Barrington. Though she had left without much more than her own fur and skin, she had eked out an existence, fishing and trapping smaller game using intuition and twine. She had almost stopped thinking her mother was coming to find her, when there she was on the doorstep. The two had an almighty fight, and Desi said more than a few things she now wishes she had not, but in the end the pair apologized. Desi expressed a desire to live on her own and despite her worry, Hanna agreed to let her, on the terms that she would be near if needed.

They traveled to Halifax, where Hanna properly outfitted her daughter, taught her to hunt with a bow and arrows as well as with stealth, scent cover, and a knife. Hanna gifted the knife Ralla had given her to Desi, as well as a beautiful gold necklace with a heart pendant on it, which she'd found while Desi looked for other jewelry. Then the two parted, Hanna to live at Desi's cottage near Barrington for a short time and Desi to make her own way.

After she left Hanna at the department store in Halifax, Desi found arrows and purloined them, and then set off alone toward the central part of 'Souls, setting up her home in a small cave in Ethereal Eclipse near the lake there. She pierced her right ear twice, once with a stud and another with a small, broad, gold hoop. To familiarize herself with the land and to gather supplies, she made frequent trips away from her den, which was more of a base than a home. During one of these trips, in Halifax, she met up with Panda Behr and Venom Trombetta, with whom she smoked marijuana and had a one-time tryst under the influence.

Before talking to any of the other packs, Desi headed to Cour des Miracles so that, if she could not find Jacquez himself, perhaps she could glean some information about the man from those that he led. She received permission to enter Cour des Miracles from Vigilante, and she met (or re-met) Strelein von Rosnete, Anann Kelevra, Robin Aatte, and Noss. She also became acquainted with Roran Wolfe (even transmitting the Luperci virus to him via blood transfusion) and Ka Ammet. She helped the latter find climate-appropriate clothing. Then she moved onward.

Desi returned to AniWaya on May 2, 2011, accepted back into the pack by her long-time friend, Ralla. Almost as soon as she came back she was traveling again, first on a mission to repay Vigilante by way of bringing some food for him and his, and then on the slightly more difficult task of getting to know the horse she acquired from J'adore Austral, an Andalusian stallion named Fuerte. Fuerte was less than pleased with the situation, as could be expected. While riding him north and east, the colliewolf encountered one Matteo Trovato, a coyote woman named Clover Love (with whom she smoked marijuana), and perhaps most importantly, Saluce Tremblay.

She and Saluce met when he returned Fuerte to her, the stallion having thrown her and run away. She fell hard for the wolf, and they had sex at least once but more probably several times till Saluce dumped her to become mated with X'yrin Exultare. No puppies ever resulted from her coupling with Saluce.

At some point in fall of 2011, with her mother and half-sister residing happily in Anathema with Leon Austral, her mother's new mate, Désirée decided to go on a trip to see if she could find Jacquez. An information trail led her south to New Orleans, though she did not expect for that trail to actually end in a find. To her surprise -- and her disgust -- she finds Jacquez in the middle of seducing some poor young thing, and interrupts him. She reveals herself and her identity, but her father denies ever having children and does not even remember his time in Souls, and then begins hitting on her! Having been warned of his personality and that he would probably deny paternity at best, Desi is not particularly surprised. She remains in New Orleans for a time, learning a broken dialect of Louisiana Creole that is interspersed with French where knowledge was lacking.

Once Desi was done with the city, she packed up her few belongings, said her goodbyes, and traveled back toward Souls upon Fuerte, stopping at Freetown. By happenstance, she ran into Leon, who explained that the family had moved to a location outside of Souls and were building a house. Her mother had had another litter, likely her last, and they, Esmerelda, Saxif Goldenfeather, and several of Leon's kids were tending a homestead. Desi accompanied him back to their home in early summer 2012.

Upon arriving at the homestead, Desi meets her new half-siblings and step-siblings, and she settles into a role helping take care of the various horses and other livestock that the family had acquired. But while she's content, she is not necessarily happy. In fall of 2014 she speaks to Hanna, Leon, and Saxif about going back to Souls. She doesn't leave immediately, but with their blessing she begins preparing to return to the land of her birth. In late February of 2015 she sets out, though she is delayed by the rains and subsequent flooding in the first couple weeks of March. She arrives on the western edge of the territory around the third week of the month. Unknowing that AniWaya has moved, she heads south first, wasting a couple weeks' time on travel. She treks back north to Cour des Miracles and a dog named George and is pointed in the right direction.