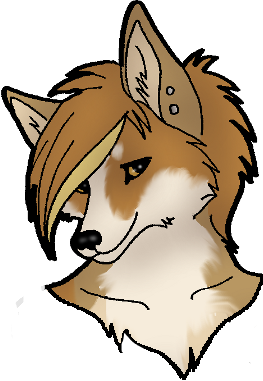 Clara Bates was a seamstress in Casa di Cavalieri. She was killed in the Syndicate Revenge Conflict.

Clara is small, her heritage prominently coyote with some hardy terrier blood in her. She is lean and wiry, agile, with a distinctly coyote gait. Her bushy tail, overall build, and ears are more coyote, while her muzzle is a blend with her dog blood, and her fur is short, soft, and a bit wiry thanks to her terrier blood.

Her fur is predominately Muddy Waters, with a lighter underside and tail-tip of Raffia. This lightens even more starting with a "bib" of Bone, which splashes her cheeks and forms a stripe up the middle of her face, as well as dotting her brows. Copper blankets her shoulders and spine, as well as patches her face around that white blaze; her hair is this color too. Her eyes are Driftwood, just a shade off her darker copper coat color.