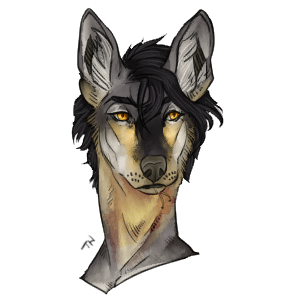 Canon D'Angelo is a fastidious wolf of discernible hybridization, with the ability to mask his truly blackhearted nature by employing a diplomatic mien. A skilled spearman and falconer, he aims to become a figure of consequence, choosing to start this quest by seeking to gain entry into his absentee father's secretive pack: Salsola.

The second eldest son of Ankh D'Aabt and Sybil Moineau. He was born in Portland, where he and his siblings -- Khalifa, Narcissa, and Saint -- as products of a brief affair, were raised largely under the care and influence of a single mother. Growing up in such a high traffic area turned him into a self-reliant street urchin, and made him savvy to the traits of many different breeds of luperci. Adversely, this environment also made him judgemental, manipulative, and privately invidious.

For the better part of his second year, he began to pay regular visits to the Salsolan Outpost in an attempt to convince its Governor to take him on as a student. After realizing that persistence got him nowhere as an "Outsider," he decided to try and force her hand by becoming an Associate. Before starting this venture, he procured the necessary assistance of a multifaceted caregiver by pretending to rescue her from hired goons, and then left Portland for Nova Scotia.

Canon is a soul who consistently demonstrates an outwardly cool and mannerly demeanor to mask both how overly critical he is, as well as how insidious he's capable of being. He will often strike his company as a rigid, obsessive erudite to the point of aversion, but more deeply he is a perceptive man of discipline and poise. Preferring to rely on cunning, emotional manipulation, and introspective patience to achieve his goals.

Always one to think twice before anything, he says and does only what's in his own best interest, and will tolerate most things until it no longer serves him to do so. In all instances, he prefers to be a gentleman, albeit one who comes off largely as an unapproachable well of profound restraint and shrewd stoicism; hiding a great and bitter upset that surfaces sporadically in the form of steep, emotional outbursts. Though he never seems particularly cheerful, Canon remains highly capable of suiting the varying needs of those around him, and can be especially engaging when confronted with the opportunity to learn. He is curious, almost above all else, with a large part of him that is earnest and voracious in its appetite for knowledge. Professing to want a great many things, his truest and innermost aspiration is to be the smartest canine in the room at all times.