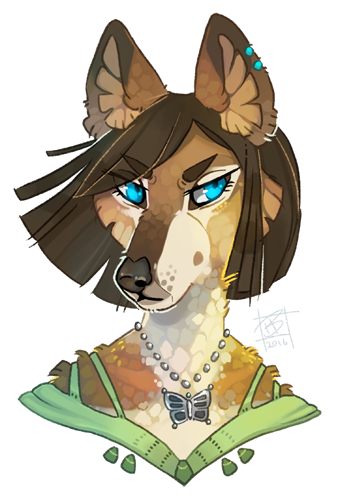 Calla Valentine (CAL-lah VAL-en-tyn) is the daughter of Velveteen Silevue and Dirge Valentine, born 18 Aug 2014 in the French-speaking sub-territories of the Toronto region in Canada along with her three siblings: Weaver Valentine, Brocade Valentine, and Hyacinth Silevue.

Calla grew up as the smallest of her siblings. Fragile and foxlike, she struggled to fit in with the style of beauty prevalent in the nomadic gands at the time, who favored the darker, curvier beauty of her mother and her sister Hyacinth Silevue. As such, Calla has always felt somewhat inadequate, jealous of the skills and natural talents of others. When she was very young, her tail was docked - Another attempt at fulfilling a beauty regime, which there-after fell out of trend.

Whilst surrounded by her beautiful sister, and strong or charming brothers, Calla began to feel resentful. She resorted to being very sly to get what she wants.

A terrible catalyst in Calla's life was when her sister, Hyacinth, was sold into a betrothal with a young man from an opposing gang. Although Hyacinth detested the betrothal, and ended up fleeing from it, Calla was deeply jealous - Particularly seeing as the young man in question was a childhood fancy of hers.

When Weaver and Hyacinth left the family group in 2015, after Hyacinth's forced betrothal, Calla felt somewhat lost. Now being the only remaining daughter, she assumed favor would fall upon her. When it did not, she grew impatient, at last realizing that nothing would change so long as she remained in Toronto. After discussing the matter her elder brother Brocade, they both decided to follow in their wayward brother and sister's footsteps, and head for Nova Scotia; Where the rumor mill swiftly led them into the clutches of the Thistle Kingdom.

Upon stumbling into the Northern territories of Nova Scotia, Brocade and Calla were accepted into Salsola and Calla eventually made it to the rank of The Arbiters with the help of Salsola's Crone, Loki Helsi who also sponsored her upon her entry, teaching her about Salsola and about being a which which she showed deliberate interest in. A short time after her entry into the pack and after she rose in rank from an Associate to The Family, Calla went to Loki after finding out his mother was dead and things became rather intimate. A few weeks later, Calla returned to Loki with the staggering news of her pregnancy that he convinced her to abort the next day.

Depressed and rather torn over the event, she pushed herself into her magic and eventually helped Hel Eternity with a curse she was weaving only to come across Loki shortly after where she grew angry and depressed over the lack of communication shared between the two and in a fit borne of co-dependence between the two, they once again lost themselves to their lust for one another, Calla promising that she would no longer let her feelings get in the way of her relationship with him.

Calla is a lovable individual who is probably too naive to the cultural norms to ever make it in a social environment. One such example of this is the docked tail; an excuse to look pretty that went out of style right after she did it to be like the cool guys. One of her primary personality traits is the idea that she can con her way into most situations and then out again. She's learned to be very resourceful with her time and learning to live with the idea that she might not be as beautiful, intelligent or as strong as her siblings has driven her into a place where she really could care less what their particular tastes might be. She's all in it for her own. Any way is a good way, as long as it doesn't get her or someone close to her killed, maimed or in trouble. Often wanting to be the best choice among a group, she will go out of her way to make herself present which has a way of either getting her into a disappointing situation or a rather tragic trouble. She can't really trust many others. It doesn't play a key part into her wants and desires, though she makes friends with those who are like her almost too easily. She adores those that give off a cunning air about them. She loves to get in with anyone who might have a higher stance in society because it may mean rising to the equation to lifting up her own moral compass for whatever it's worth. She believes herself to be the ugly duckling of her family, the black sheep considering her wiles are more in intelligence than her other two siblings, or her mother for that matter.