Calhoun de la Cruz is an aspiring preacher from the Del Cenere Gang, where she is currently ranked as Las Brasas.

One of three children born into Evelyn Escuella and Santiago Tejada's first litter, and raised alongside an adopted brother, Calhoun's early life was largely unremarkable and filled with happy memories. Named after his late uncle, he was gifted the surname "de la Cruz" as a nod to the man's title as "The Reverend" and has found a distinct interest in spirituality and religious studies. He spent much of his time learning about religion from Resurrection de le Poer, but there were changes afoot as his first birthday neared and he stepped into adulthood just in time to navigate the tragic loss of his sister, Luciana.

With the growing tension of a destabilizing family marred by stress and grief, Calhoun has appeared to double down in his aspiration to become a preacher and spends a great deal of time at The Parish, with or without Resurrection or his younger sisters. But whether his efforts come from to a true devotion to the lord or from a desire to hide his emotions behind a pious facade only Calhoun can say... 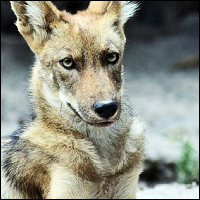