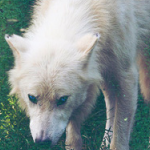 Barthélémy Aston was a ridiculous wolf who was involved in the lighthouse murder mystery. He was a member of Phoenix Valley for a brief amount of time (because his cousin, Allegro was a member), but was scared of Onus, so he ran away to Québec. On his way north, he met a coyote named Bernadette, with whom he has two sons.

He is the brother to Tayui, Aurèle, and Honoré.

Barthélémy was born east of Lac Sakami in Quebec on June 3 of 2003. His childhood was not a particularly pleasant nor woeful one, and was simply a childhood. He was much smaller compared to his other siblings, and lived in constant fear of being harassed for it (but never was). He neither got along with his siblings nor got into fights with them, and was never close with any of them. He regarded Tayui as a little strange, and generally kept out of her way. He avoided Aurèle mostly out of fear, for he had always worried she would not like him. He tried to befriend his brother, Honoré, but never really succeeded in his attempts.

When his sisters Karina and Éloise were born, he immediately befriended them, taking a liking to Éloise immediately. Although Éloise regarded him as a little strange, she tolerated Barthélémy's presence nonetheless. They never became extremely close, but Barthélémy was content having something of a friend. Aside from his interactions with Éloise, his years as a puppy were rather bland and boring. He spent a great deal of of his time playing with his other relatives and taunting raccoons. He was genuinely shocked when Tayui left, not having realized there was anything wrong in the pack. Although he knew his half-sister, Liesl, succeeded in murdering his sister Karina, he did not realize the implications of this until years later.

Barthélémy grew up into a generally confused luperci, unaware of the many problems that plagued his pack. He noticed that many of his family members were disappearing, but never acted upon this observation. If anything, his adolescent years were filled with either indifference or ignorance. When Éloise disappeared, Barthélémy finally realized something was amiss in the pack and set out to find his sister.

Although Barthélémy had a clear goal in mind, he had no idea where to begin. He began meandering through much of Northern Québec, trying to find people who knew where Éloise hand most of her family were, but he was largely unsuccessful. Although Barthélémy does not realize it, it was around this time that he met Éloise's friend from the gypsy troupe, who offered to show him to Éloise; however, Barthélémy slipped while walking on a patch of ice and hit his head on a rock, resulting in organic amnesia. He was thus unable to remember the two years of his life spent looking for Éloise and unable to remember the gypsy wolves. As a result, he never followed them to find Éloise and still does not know where his sister is to this day.

Barthélémy eventually wandered to Nova Scotia hoping to find his brother and perhaps any other family members.

While in 'Souls, Bart discovered that few inhabitants spoke French, and found it very difficult to communicate with anyone. Dohi Ulagahasti[1] and Ahren de le Poer helped him in his quest to learn English.[2]

He later discovered his sisters, Aurèle and Tayui, but was too afraid to approach them.[3] He also found his cousin through his wanderings, but was too preoccupied to enquire about Éloise.[4] It is quite possible he has forgotten about his search for his sister, as his memories of the purpose of his journey are largely muddled.

After meeting Onus, Bart became extremely afraid of the inhabitants of Nova Scotia.[5] His encounter with Onus left him shaken, and he tried to find Allegro to tell her what had happened. In the end, he couldn't find her, and he fled from Nova Scotia, and headed back to Québec. On his way back, he met a strong-willed coyote named Bernadette. She made his heart feel strange, but he enjoyed his encounter with her nonetheless. Five months later, she found him once more (Bart suspects she was stalking him, but there is no proof of this) and informed him of his children. She demanded he name them, and he bestowed upon them names that would have earned them swirlies had they attended high school.

Barthélémy continued heading north, but for some reason, Bernadette insisted on following him. Unfortunately, she did not realize he planned to seek refuge in one of the northernmost regions of Québec. Bernadette decided to leave him with their two sons, and later, the two boys wound up in 'Souls.

He sought refuge with a pack of wolves in the old human community of Salluit, Québec. The wolves were mostly a mix of québecois and Inuit descendants, many of which spoke both québecois and Inuktitut (Nunavimmiutitut and Qikiqtaaluk nigiani, to be specific). At the moment, Barthélémy is struggling to learn Inuktitut, but generally likes it up north.

Barthélémy died in July 2018 after growing too weak to hunt. He left Salluit to die in peace and passed away in late July.

Bart was extremely timid and jumpy, and was always worried something bad would happen. Since he suffered from amnesia, but never really realized it, he always finds his body to be too large and awkward. He never really grew up like most canines would, and did not grow into his adult body so to speak. His personality growth is a little behind, but he is a genuinely good guy otherwise.

Bart uses his Lupus form most of the time; he never uses his Secui form and very rarely uses his Optime form.